Today was a cool day to start but at least no rain for now so we went down to Prime Berth Historic Fishing Centre, to learn about the Cod Fishing in the old days when the fishermen would prepare the catch for market by deboning, washing, salting and drying the cod. The man who owns and runs the centre demonstrated his skills, as a fisherman, guide, poet and storyteller. His wife runs the gift shop and they have managed to supplement their income that has been restricted due to the moratorium on Cod fishing. These days, the quotas are so low; he catches his share in two days and makes around $1500 which barely pays for the fuel and boat maintenance. He spends most of his time running this little show, talking to people about the past and selling his book which he freely autographs once the demonstration is finished. 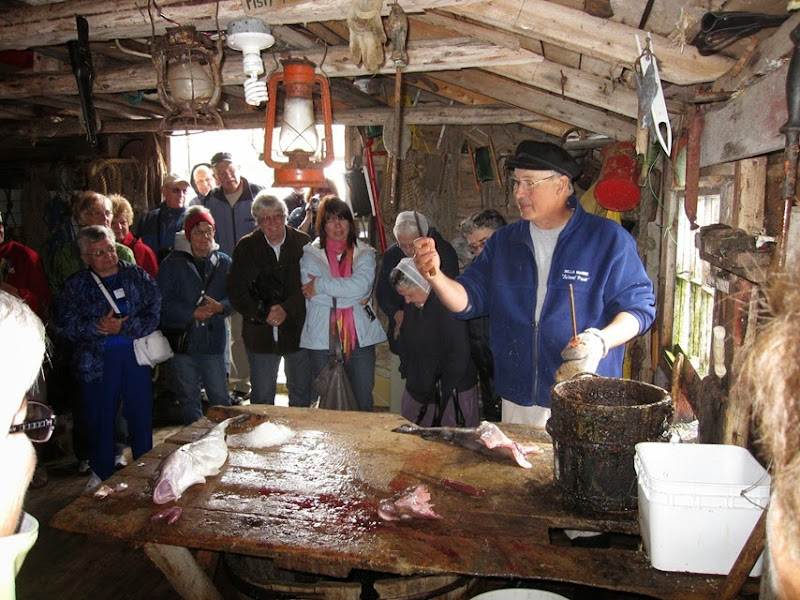 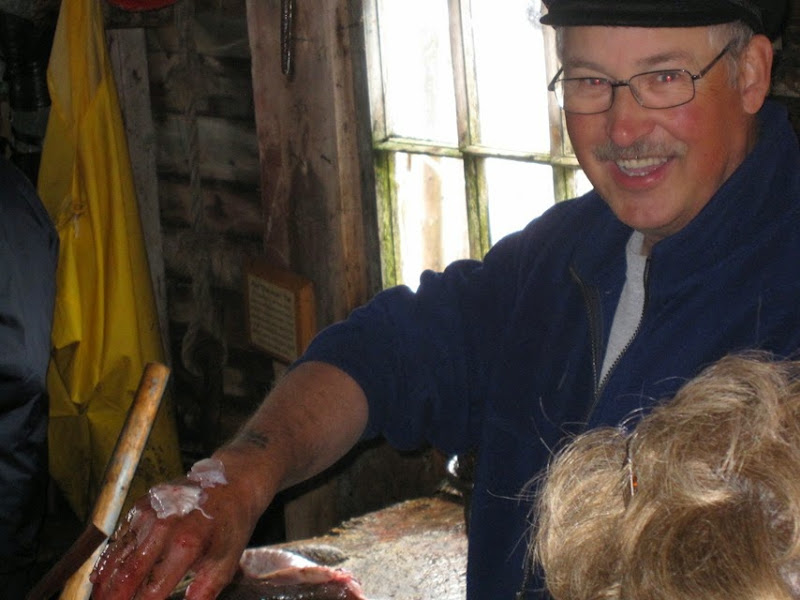 He still uses this boat for the little time he is allowed each year. 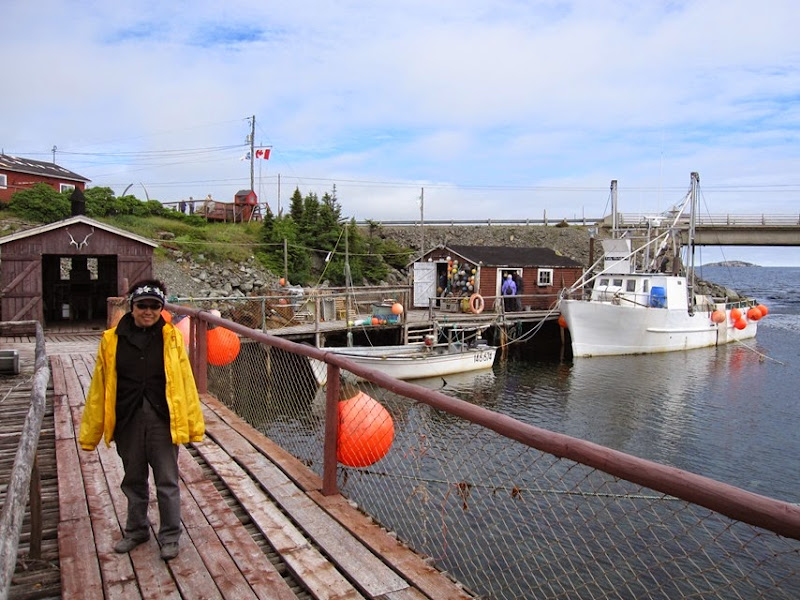 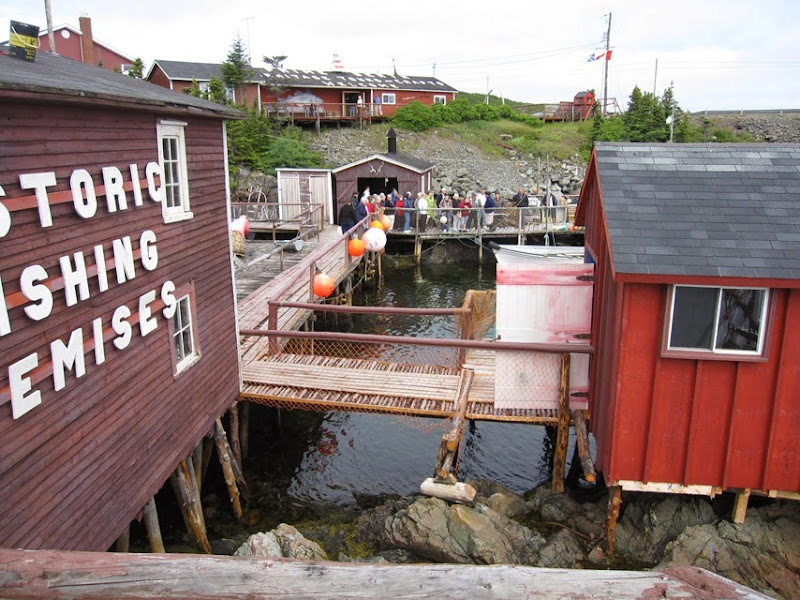 The place is popular with the tour buses. 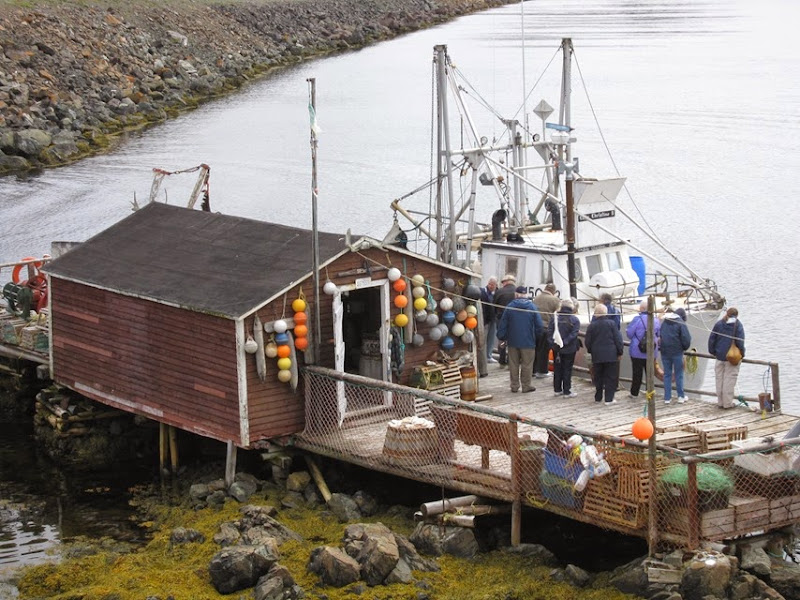 He found this whale carcass, hauled it to an island, removed all the meat and skin, waited a year for it to dry out and then mounted it here. 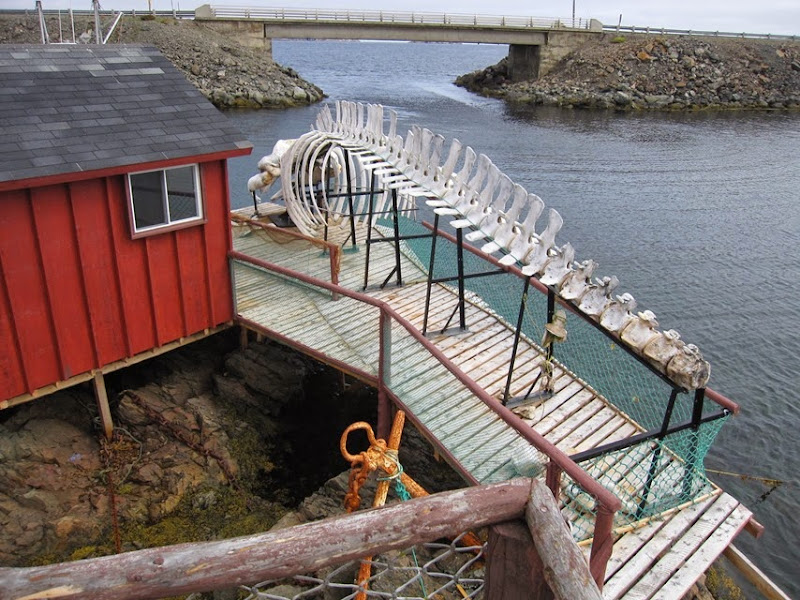 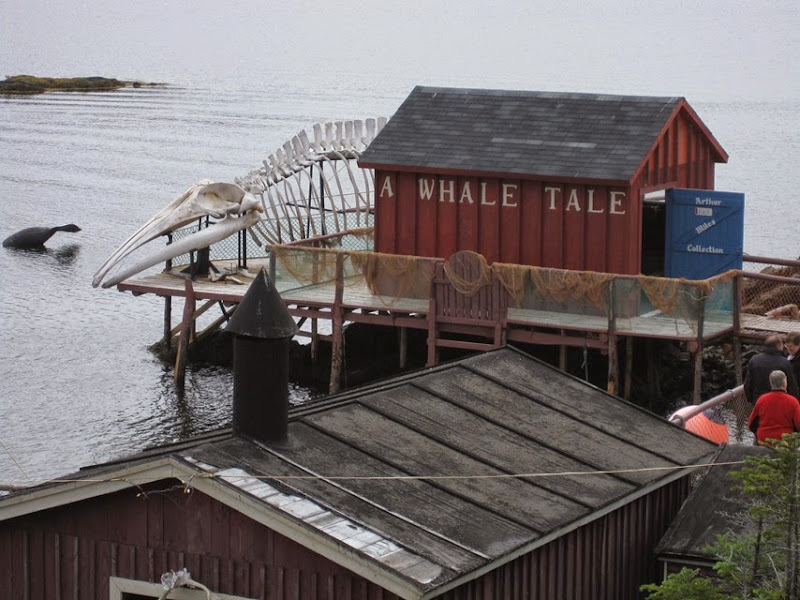 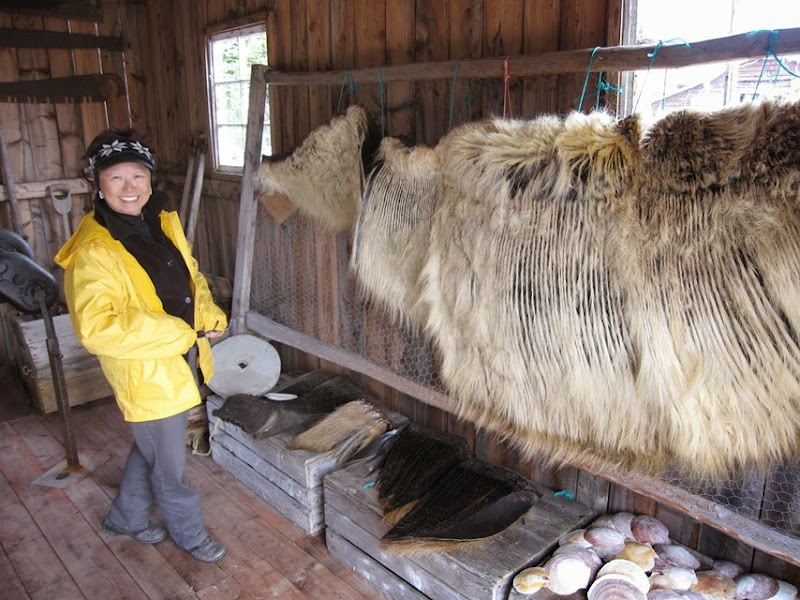 Today, once the catch is hauled in, they take it to the fish processing plant and are paid fifty cents a pound and that is the end of the season for them. He has another license to catch crab which might take another week and then what else do these fishermen have to do but collect UIC.

It is good to see that some of the people are proud of their heritage, willing to invest their money to keep the memories and old ways alive while making a living instead of sitting back and living off welfare because what was is no more and they are not interested in trying to work within the system if money is theirs for nothing.

In the afternoon we hiked, the Top of Twillingate trail (3 kms) up some steep pitches with stairs, lots of tripping over roots in the forest to 4 platforms strategically placed to view the town and then back down to the bottom around a pond that had beautiful water lilies in bloom. The trail was not well marked by signage indicating where each branch led. We were talking about which path to take when one of the boys manning the beverage and rest stops came by and he did not offer to explain until Stuart pressed him for information. Guess he does not know his job yet. 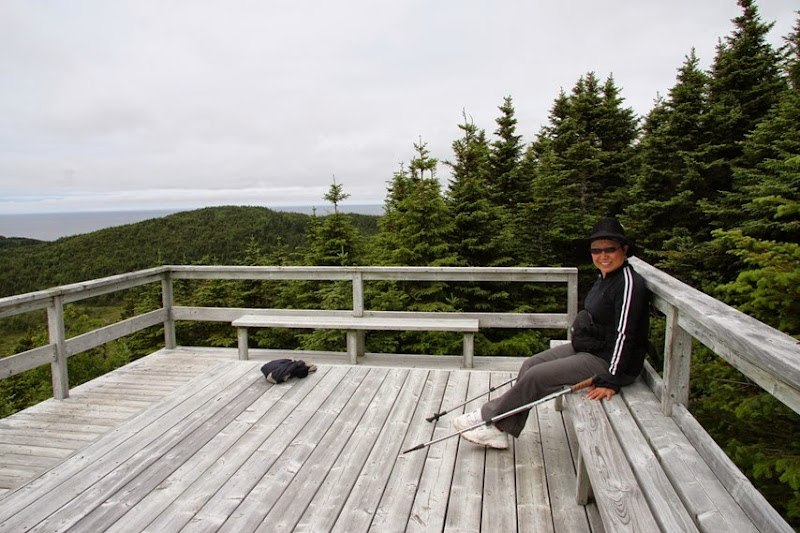 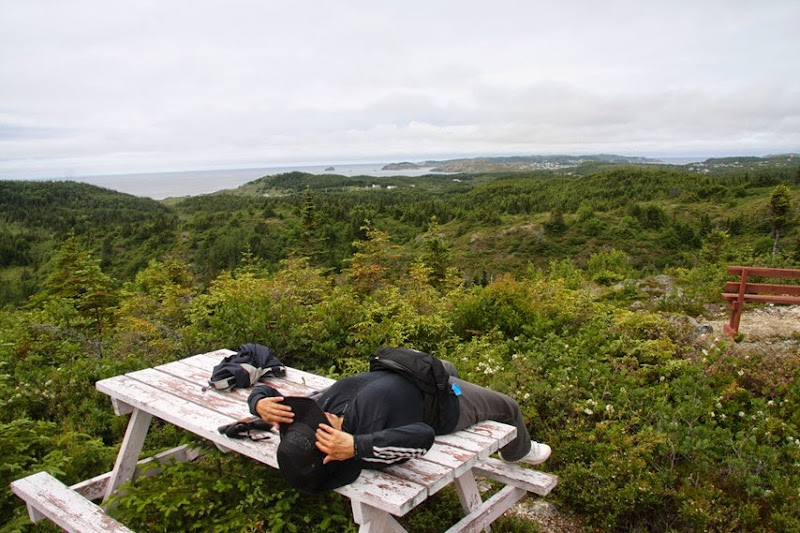 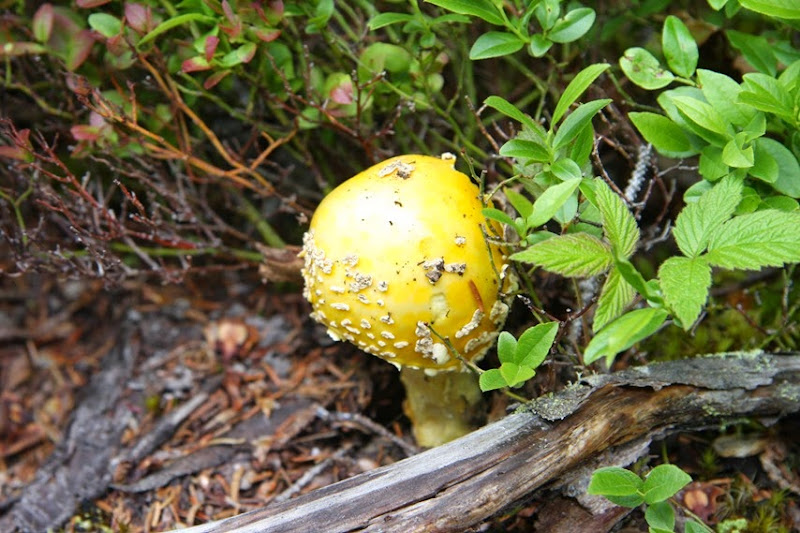 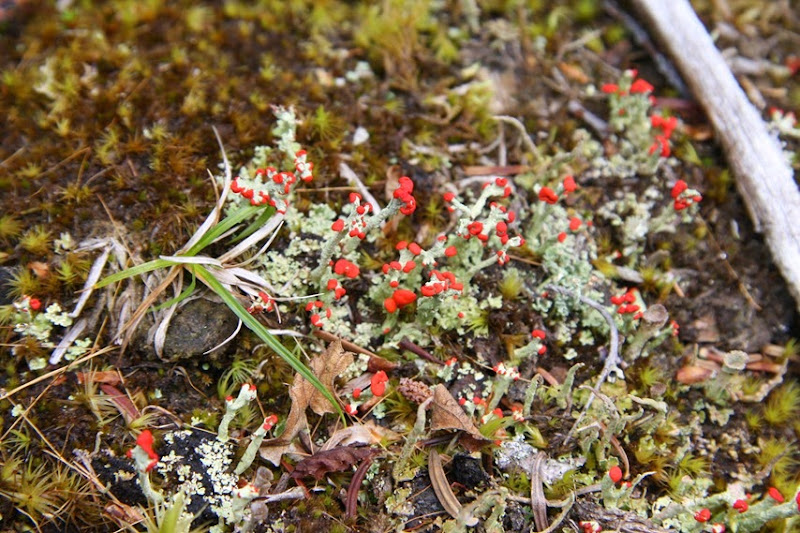 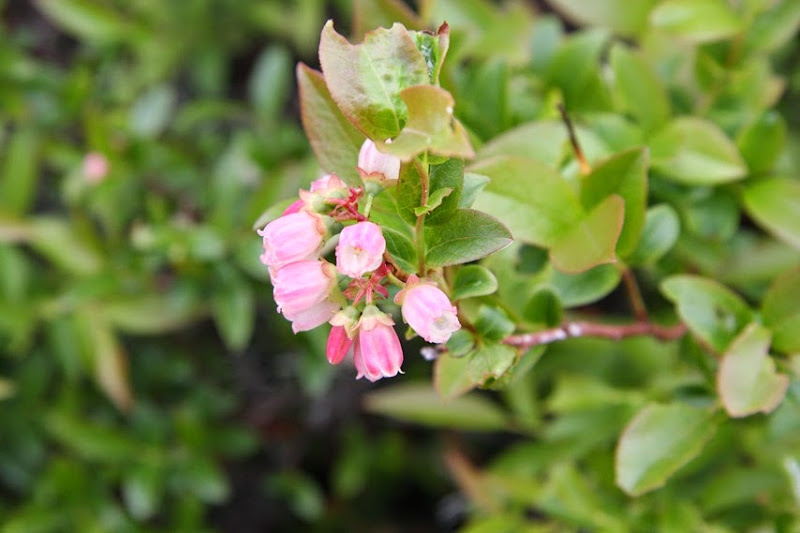 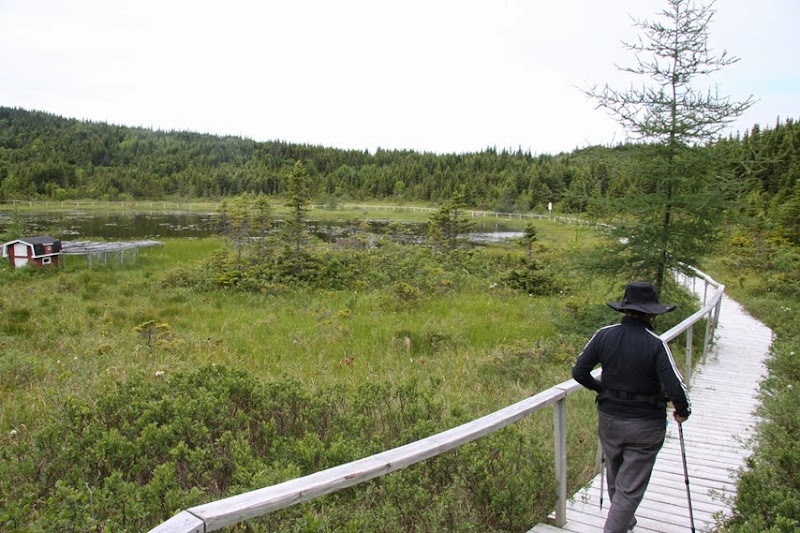 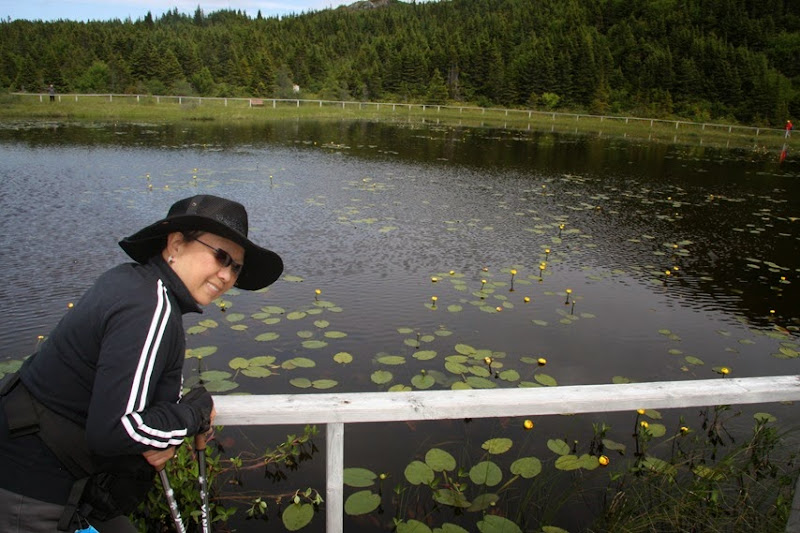 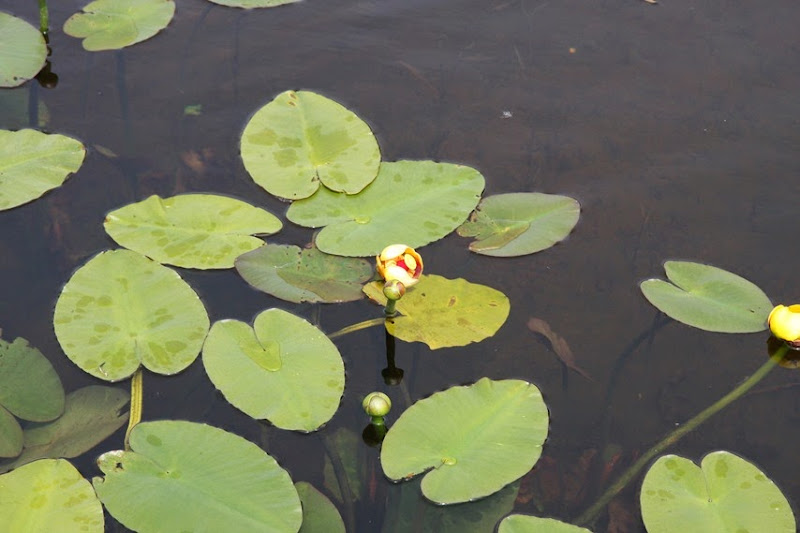 We drove to the Long Point Lighthouse and had ice cream cones in the gift shop. I was tempted to get some fudge, as they had free sampling which leads to buying a pound or two. I find fudge too sweet and it is hard to eat very much so I am glad nothing appealed to me. I review the souvenirs at the gift shop and find it difficult to pay the inflated prices for the simple things; like $10 for a scarf when it is so simple to knit it. I should go to the fabric store and just buy a bit of fleece which does not need to be stitched or anything; just cut a straight length and voila, you have a scarf. I was hoping to find one in the dollar store. There was a fleece hat $5 that was reasonable but I did not need a pashmina for $6. Well, I could use it later but for now, I want a small scarf; not a shawl.

I do not know why I bought this silly little figurine that lights up, except that it was cheap ($3). I also got a fridge magnet to remind me of this summer. I must remember to inscribe the year on it so that I remember when we did this trip. I thought that I would never forget the New Zealand trip but the memory is a tricky thing. I thought it was 2000 (for my 50th birthday) but it was March of 2001.

Near the lighthouse, which was not open to visitors, there was a lookout where you could see people walking along the various paths. I was uncomfortable hiking from the top down. Two men had just finished the walk upward and one said it was tough. I thought I could hike up easier than staring down and walking. However, when we were down at the base, I was not happy looking up at the two options; one with many stairs going up a mountain and disappearing; another rising steeply up 304’ in elevation to the lighthouse lookout. 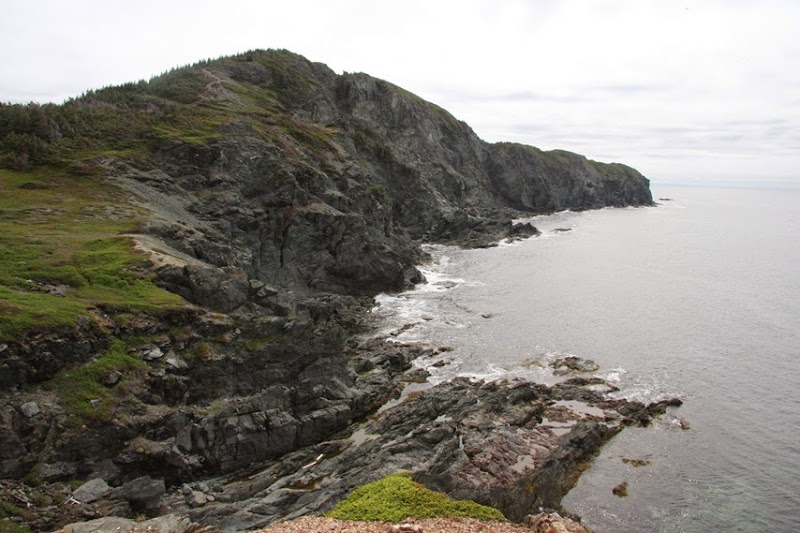 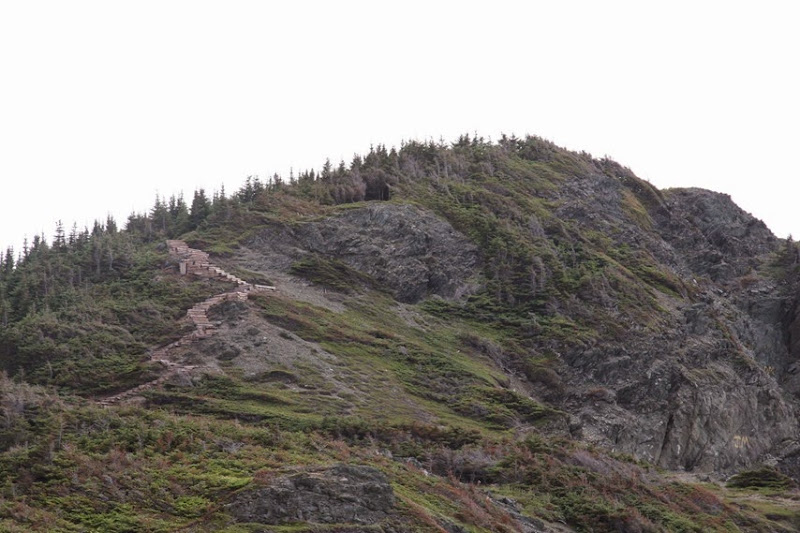 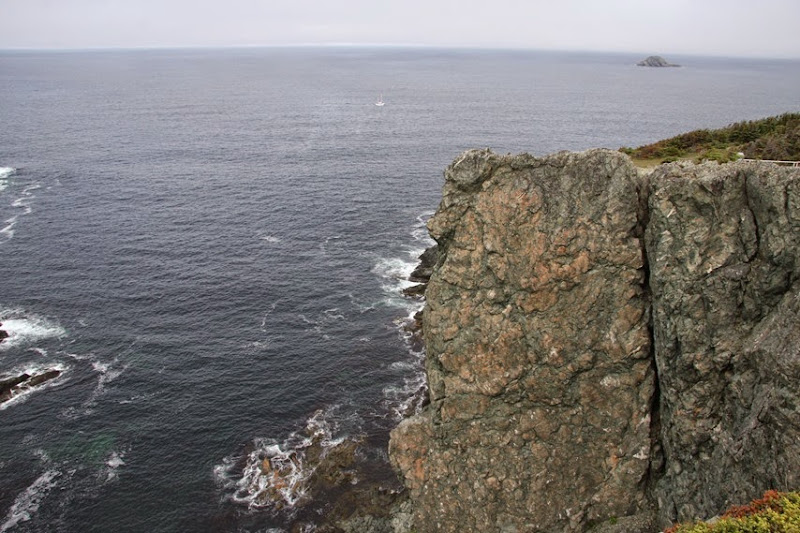 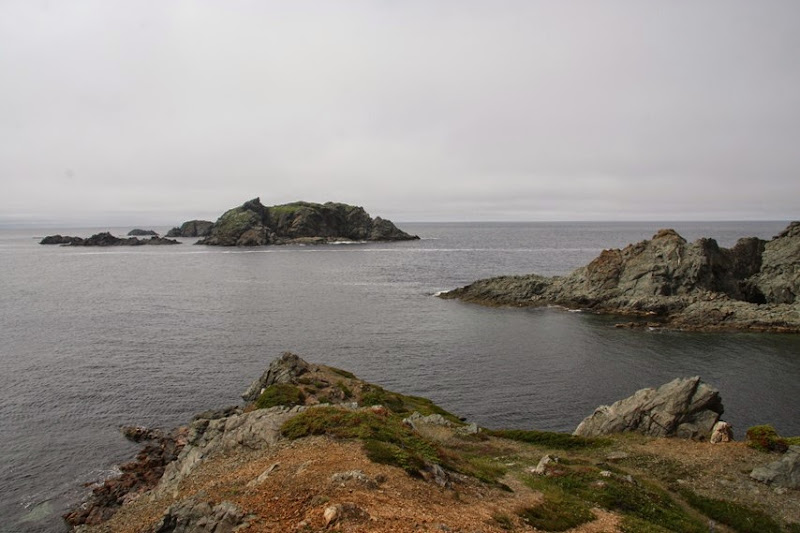 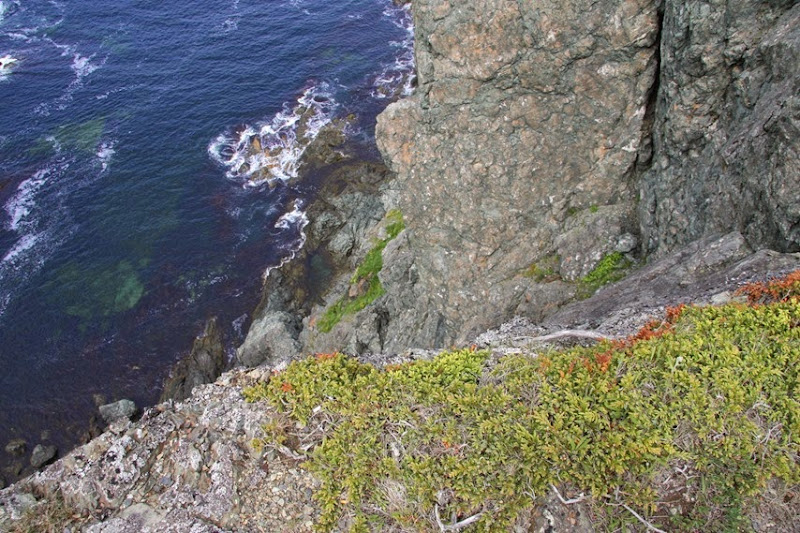 We opted to hike “Sleepy Cove to Long Point (2 kms) along the rocky coast. The beginning was walking along a grassy portion to the stony beach and then gradually climbing up a rocky path to the cliff. Some of the parts were too close to the edge of the cliff for my comfort, so Stuart had to hold my hand so that I could look the other way. There was the option to take a path climbing to the lighthouse but it is did not thrill me. I am glad that we chose the inland branch as it started to rain, making the path wetter and slippery. At least there were no mosquitoes here to annoy me. I have not clued in to the fact that every waterfall, bog trail and forest path has biters and I should bring my gear or suffer the consequences. 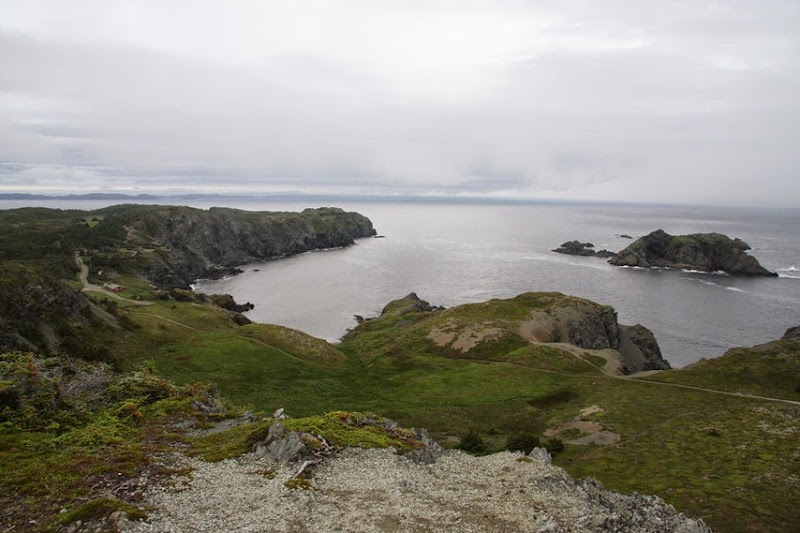 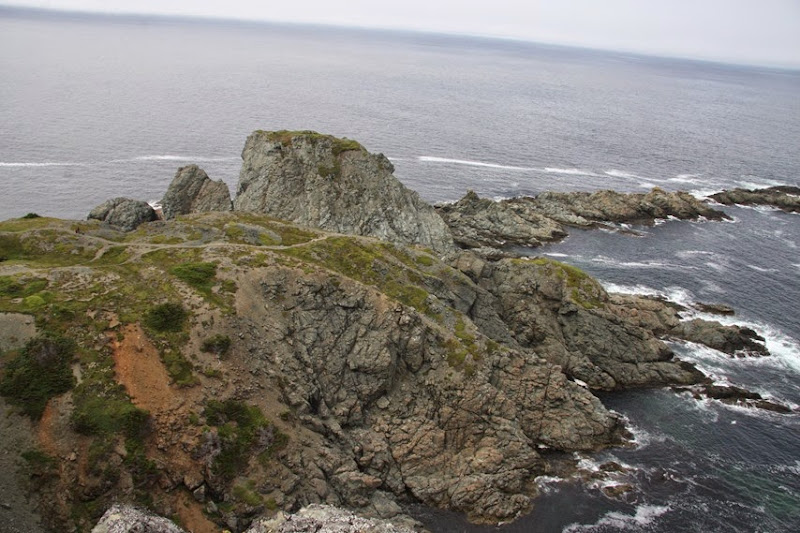 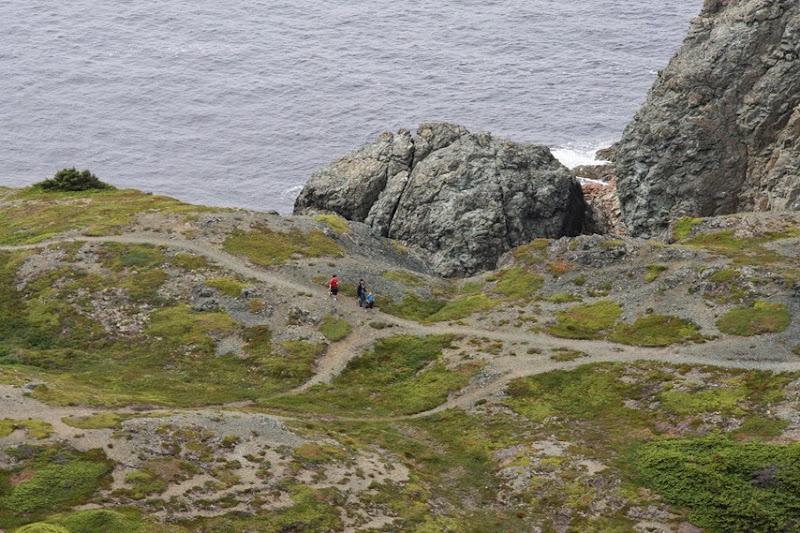 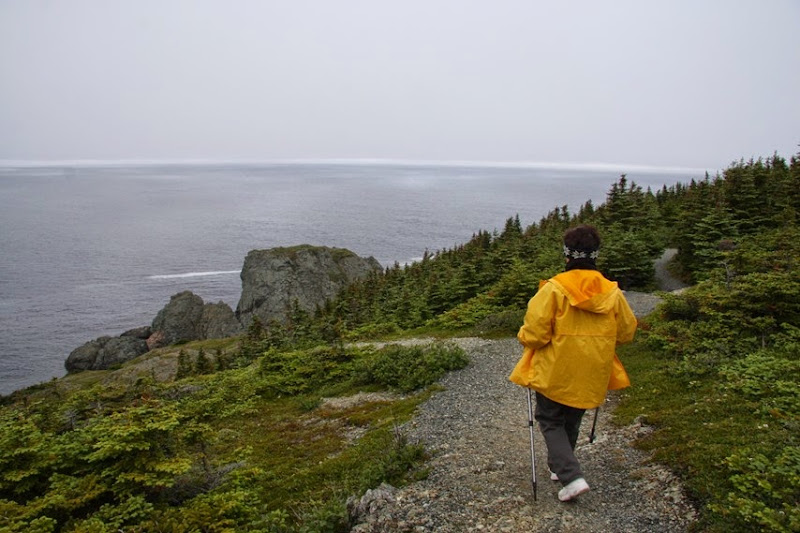 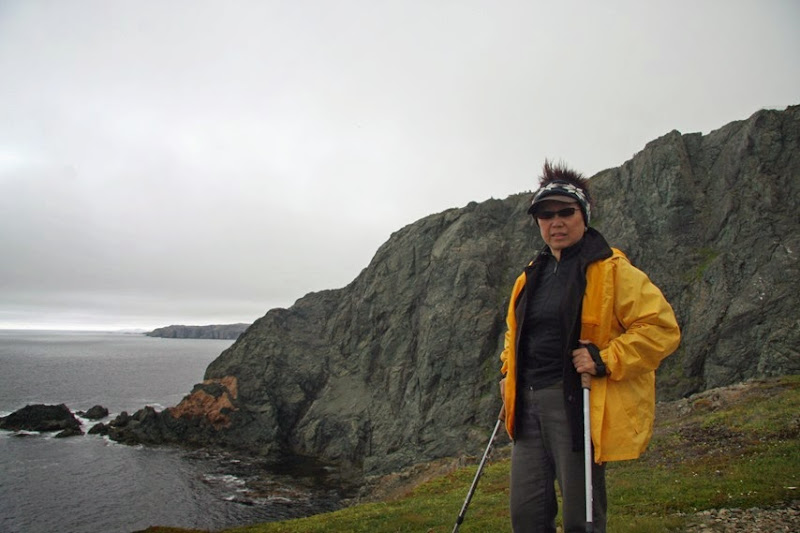 A surprise phone call from our daughter. 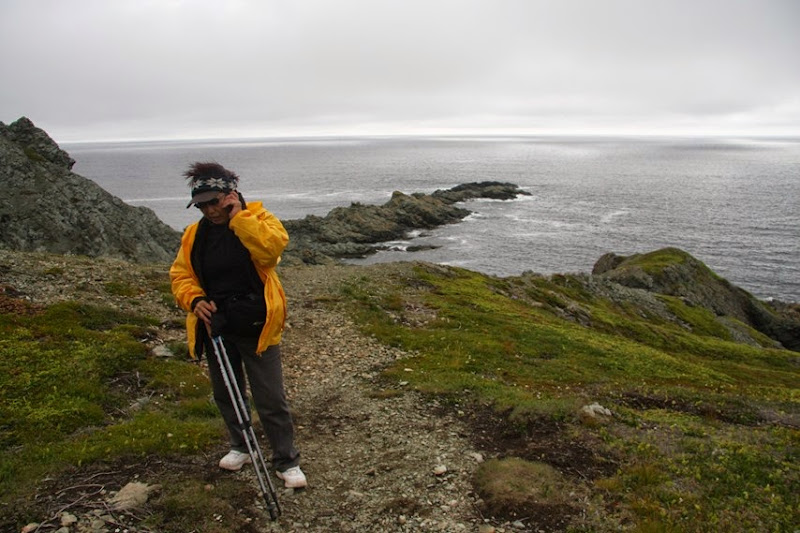 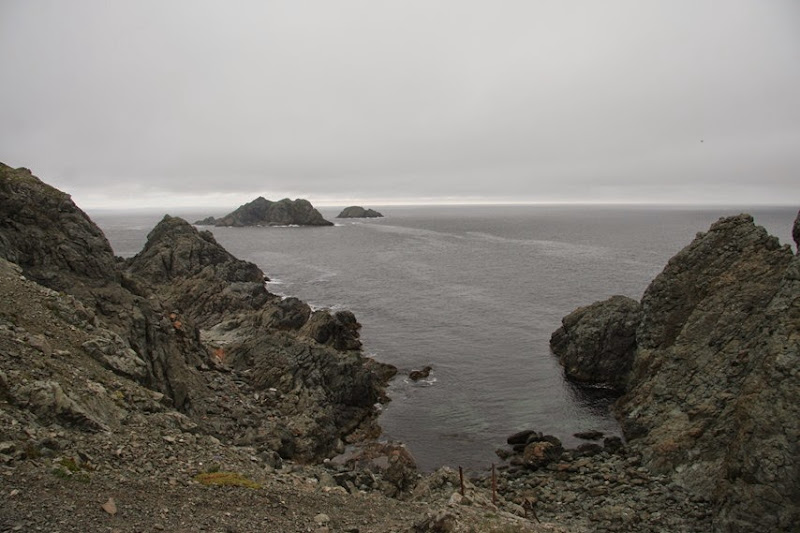 You can barely see the people at the top of the cliff in the picture below. 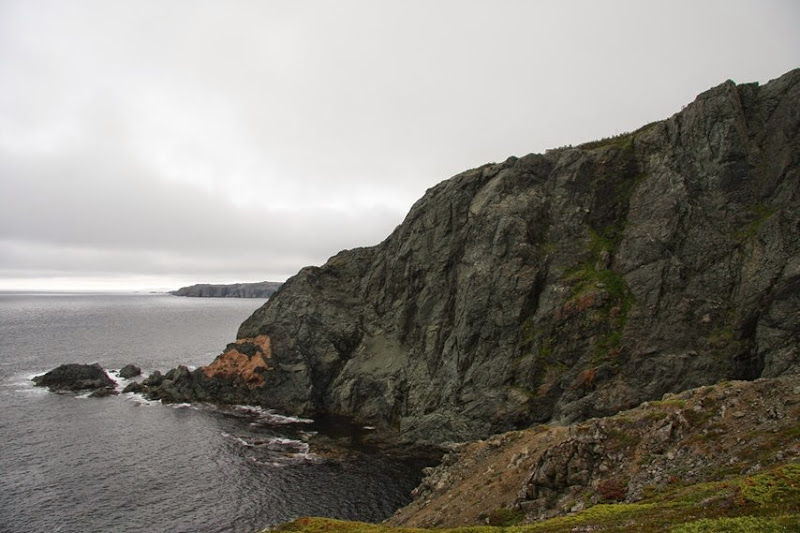 Both hikes were short but it was enough for today, as the raincoats were dripping. It was only 4:30 pm but the weather called an end to the outdoor activities. We drove home and I made dinner. Salmon was pan fried and served with steamed broccoli and rice with tomato salsa. For lunch we had French Onion Soup with melted cheese (cheddar is not good for this) on stale buns in the soup

I felt tired after the hike but held out and crashed after dinner. We got up at 7:00 pm, as we had an early dinner and had lots of time left to update the journal.