We are touring the western finger of the Avalon Peninsula to Cape St. Mary’s to visit the Ecological Reserve there and then wind back north along the Bay coastline to Placentia. It was raining in St. John’s when we left but that quickly cleared up. 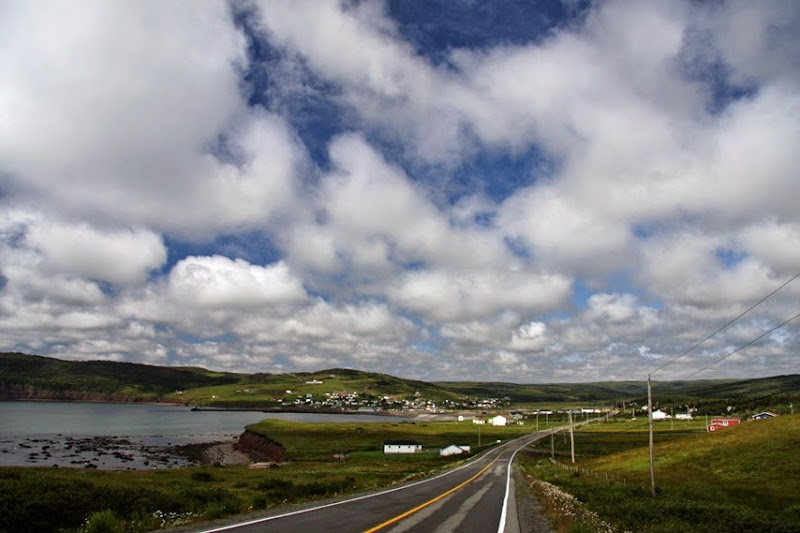 The drive down Rte 92 was uneventful, as it was like being on the prairies; flat for miles. 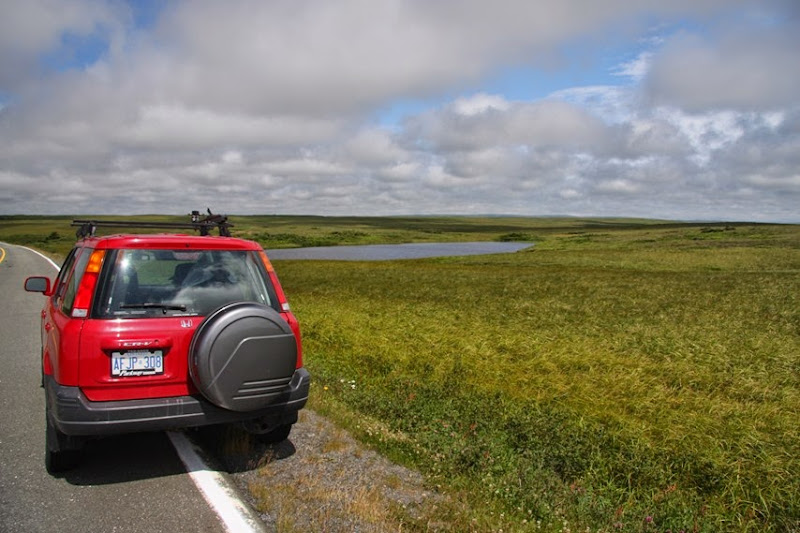 Along Rte 13 to the tip of St. Mary’s Bay, fog started to get thick, making it difficult to see more than 10 metres in front of the car. We got out of the CRV to hike to the Reserve and wondered what we would be able to see as the fog continued to get thicker. Signs posted warned hikers of the changing terrain and weather, to exercise extreme caution. They weren’t kidding. There is no fence or guardrail; just stones marking the edge of the cliff (100 metre from sea level). With the fog, it was scarier or maybe less, as you could not see the drop to the ocean. 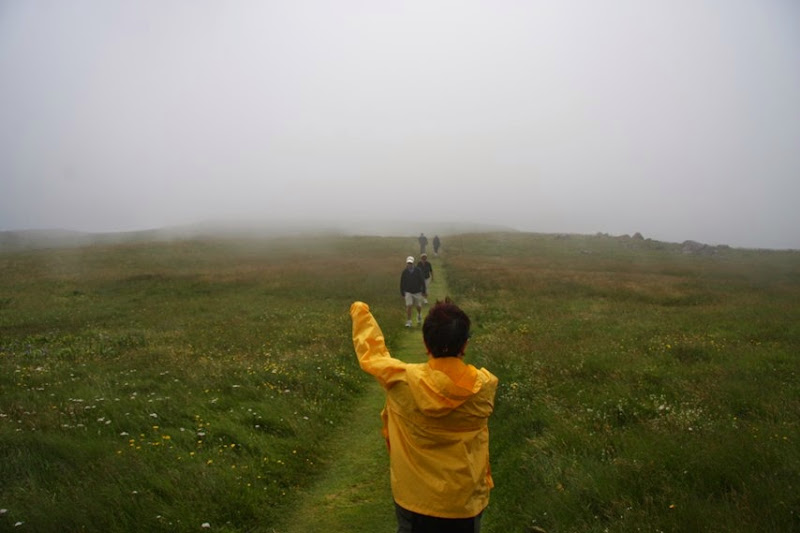 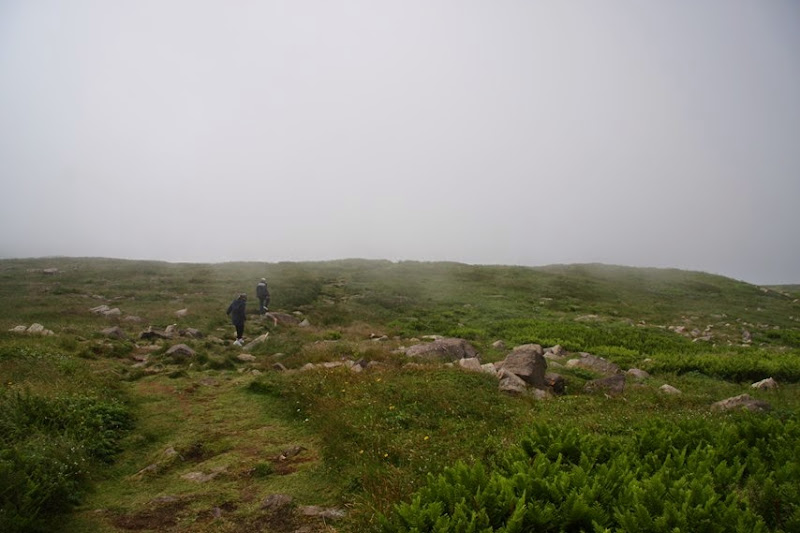 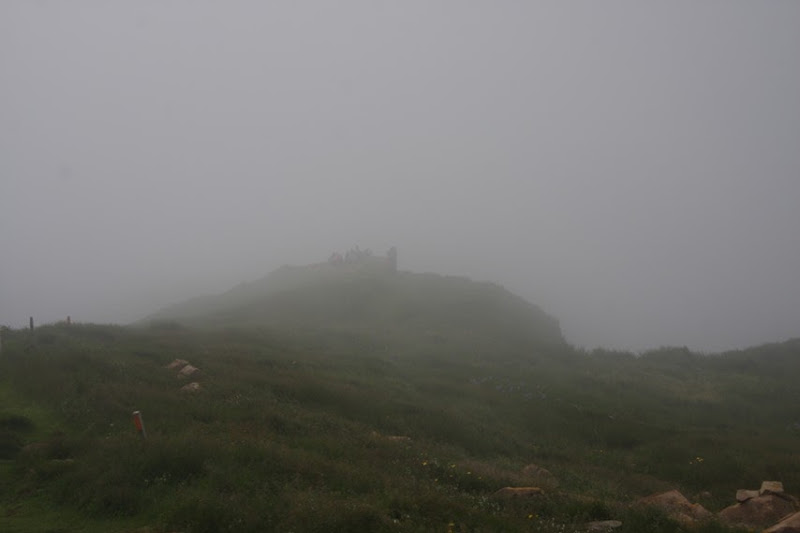 The sky was filled with birds; only pictures can explain how close we could come to Bird Rock and the density of the housing all along Bird Rock Cove, like snowflakes whirling about and dusting the cliffs. The Northern Gannet is a creature of habit and will come back year after year to the same nest to lay eggs and nurture the one offspring until October when they are ready to fly. The colony is so crowded ( over 70,000 seabirds) they have spread to adjoining cliffs which they share with Common Murres, Black-legged Kittiwakes, Thick-billed Murres, a few Razorbills, and even fewer Black Guillemots. Of course, the Auk, a flightless bird tasted so good, it was hunted to extinction and no longer around. 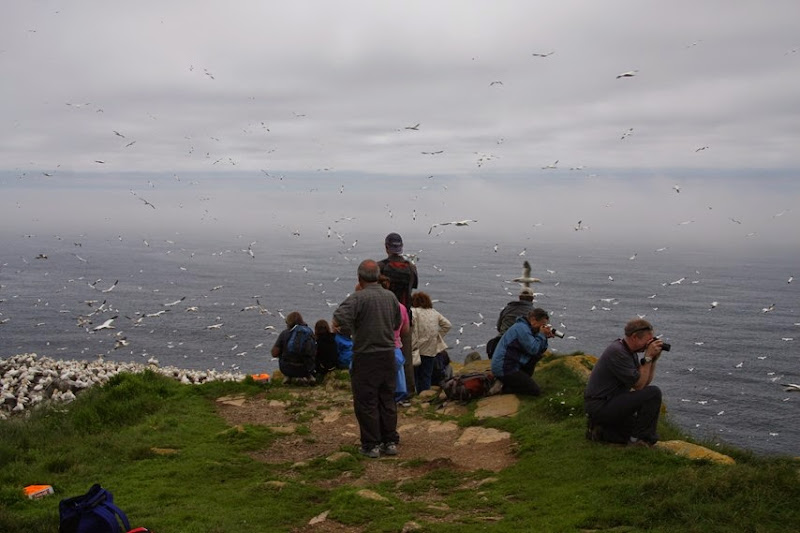 It was kind of a scary place to be. You could carefully go out to the tip of this rocky point. With no railing and sheer cliffs 400 feet down I do mean carefully. About 20 feet away from you was a rocky pillar that rose from the sea back up to your level that was just covered in birds. They are big guys with up to 6 foot wing span. Amazingly nobody got anointed. 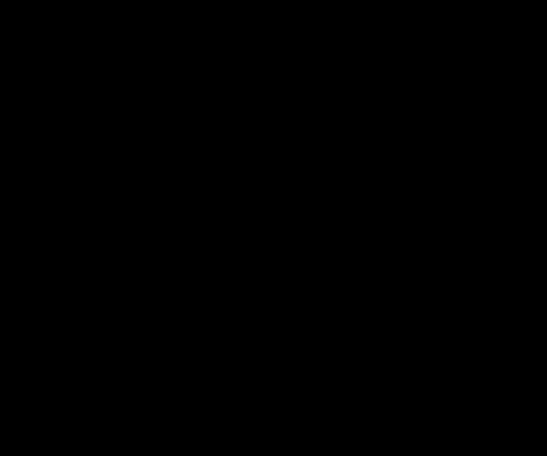 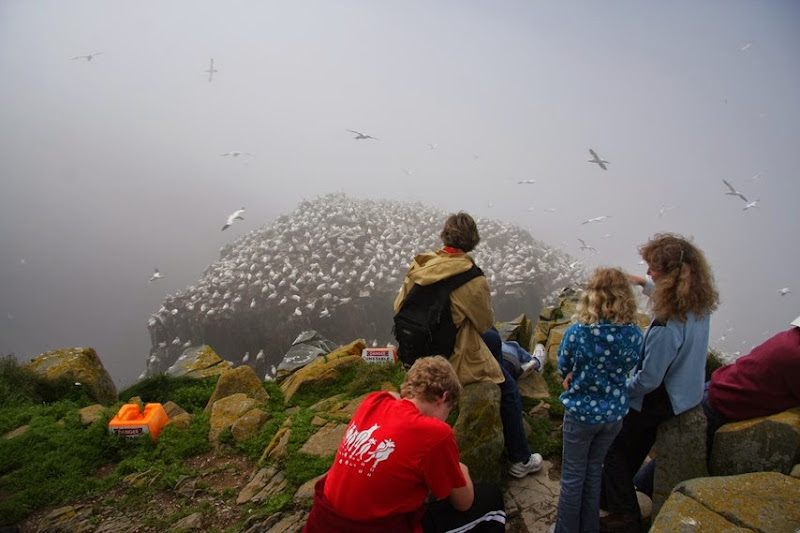 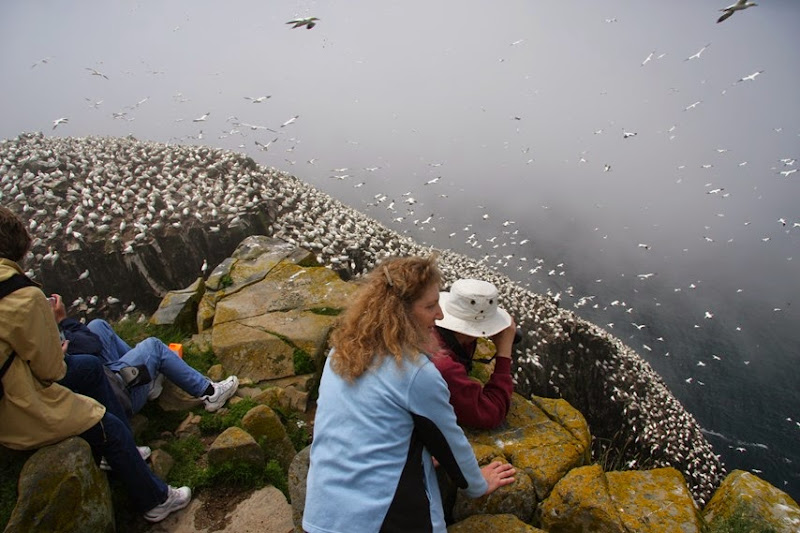 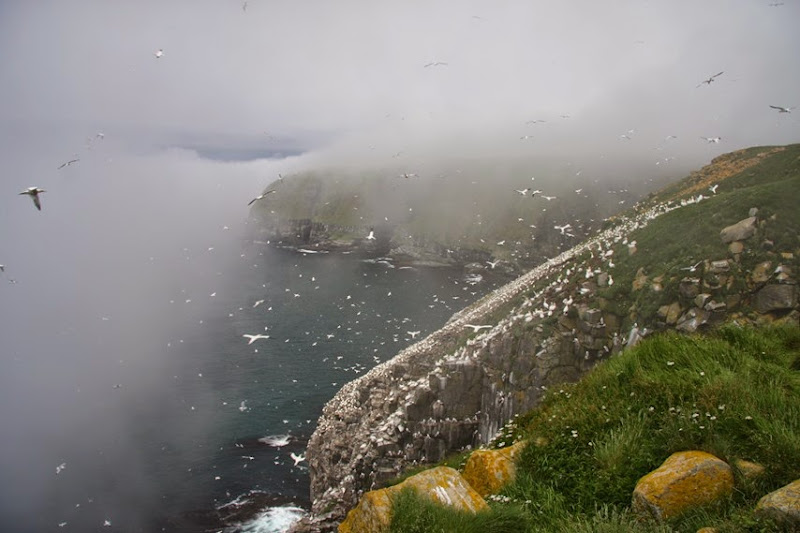 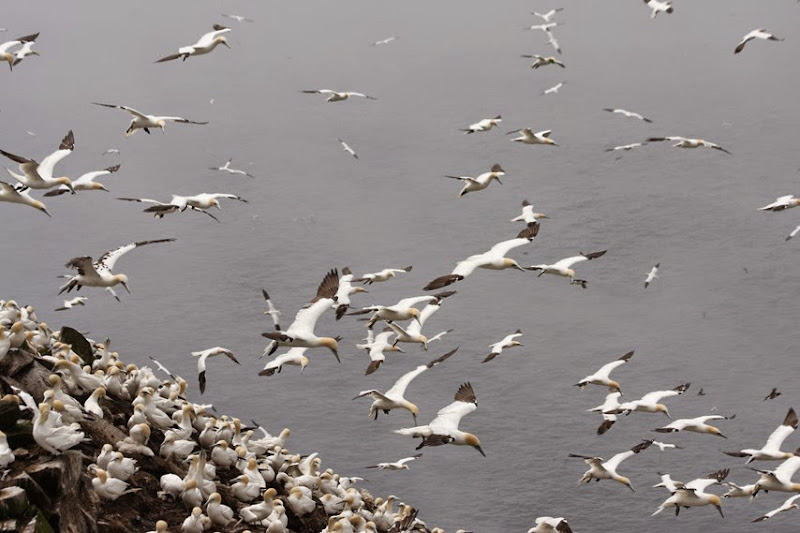 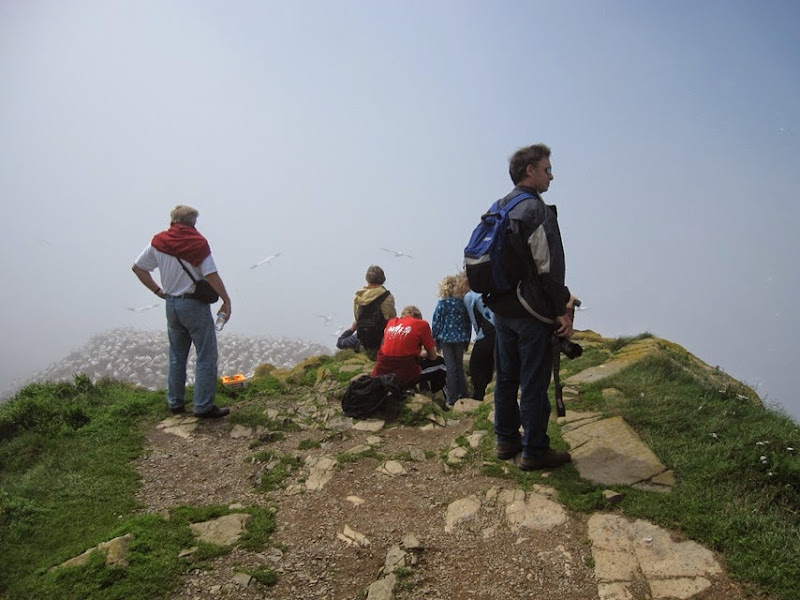 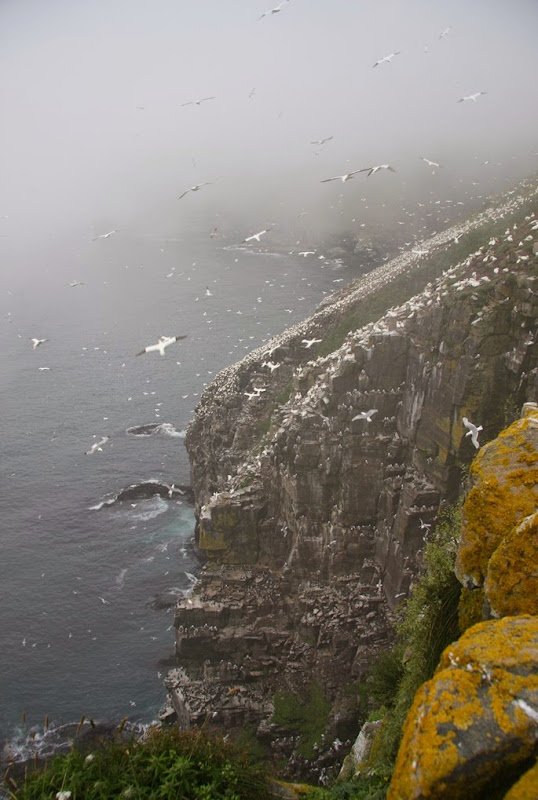 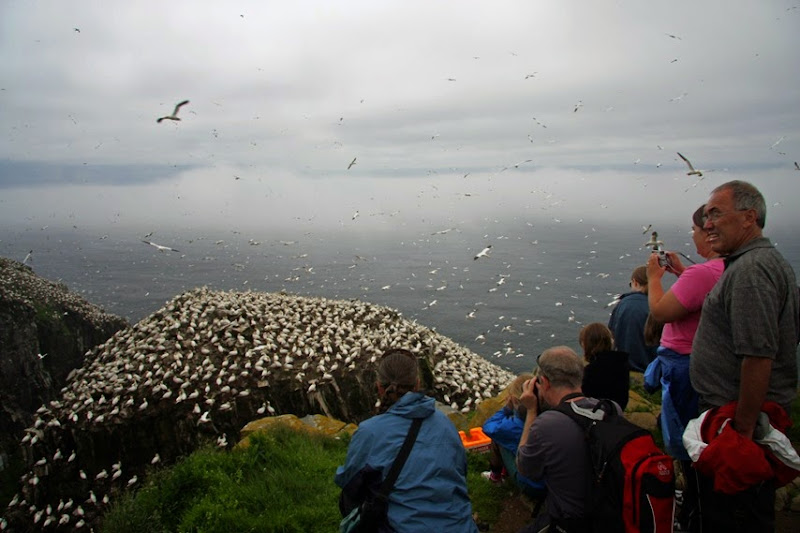 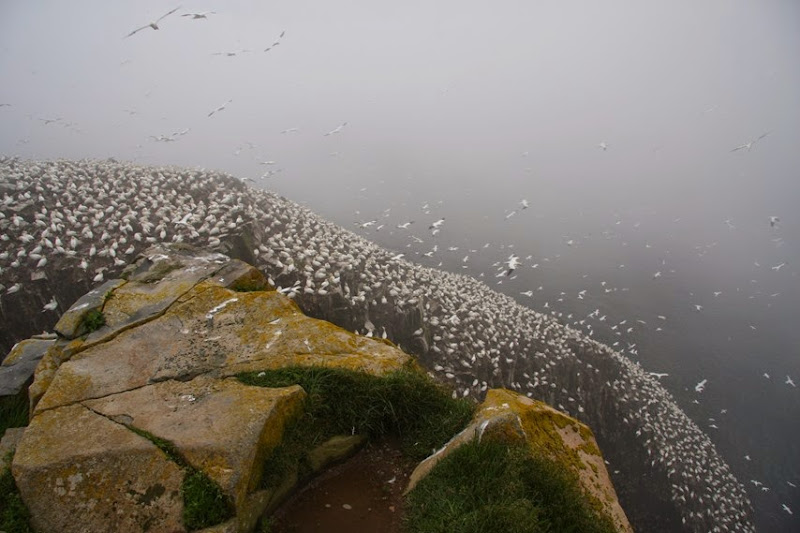 Looking back towards the visitor’s center and the lighthouse. 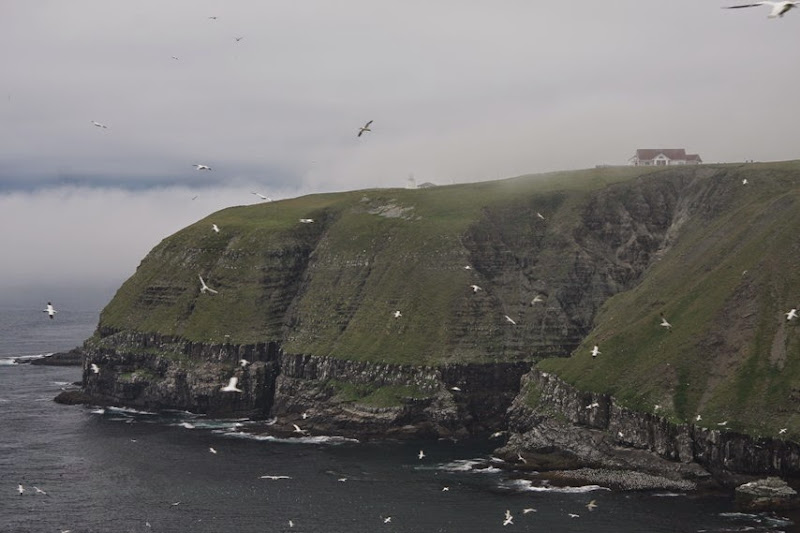 We went over at sat on the cliffs you see above to look for whales. Below is the view back towards the nesting site. The white on the hills is all birds. 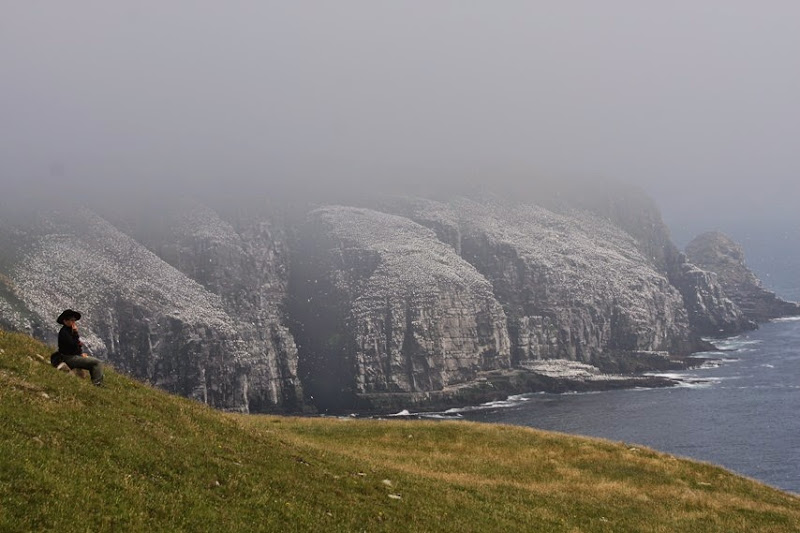 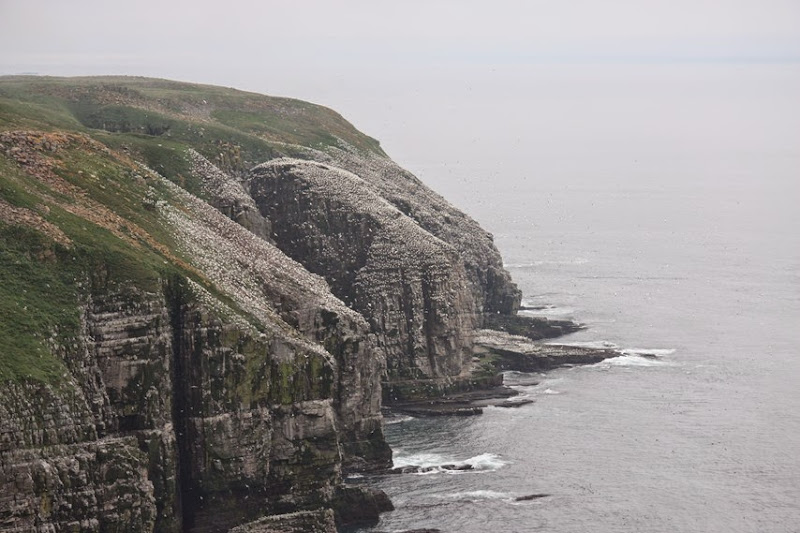 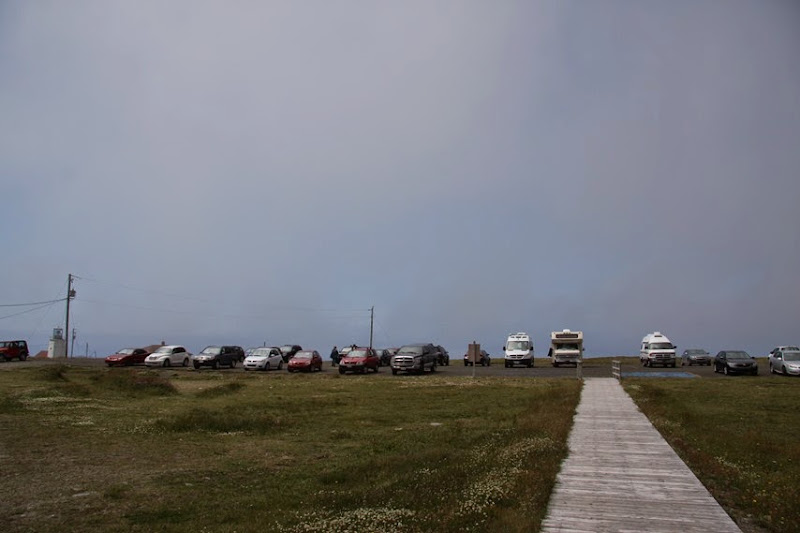 It was recommended that we have fish & chips at the Gannet’s Nest just outside the Reserve in St. Brides. The bowl of seafood chowder ($5.50) was good but not the best we have tasted so far. The check came to $16 for 1 piece of fish with chips, chowder and a Pepsi. It was 3:00 pm and we had already eaten our sandwiches at noon, so we shared this snack before heading back to our campsite. It was a long drive.