When in Rome….  Here we are in the epicenter of buggies and dunes so we paid $28 per person for a half an hour sandrail ride in the dunes. 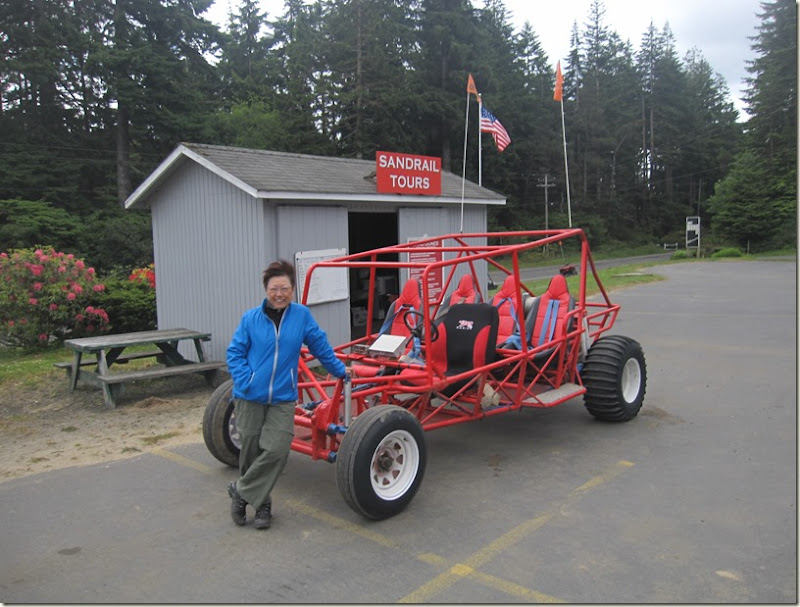 It was like a rollercoaster ride,  steep rises and falls only without the extreme sensation of height due to the lack of depth perception, cruising along sideways wondering if we were going to roll, as there is not rail to keep the buggy hugging the trail.  Like skiing, you do not know what is on the other side of and edge until you get there.  Sometimes he went over and other times we just went along the side of the crest throwing up sand.  We got our facial scrubs and fiber for the day, that’s for sure.  I still have sand in my ears. One thing I would recommend is bringing earplugs if you sit in the back seat (the motor is exposed and quite noisy).

We don’t have any pictures when we were moving as there was sand everywhere and we had to keep the camera inside a ziplock bag inside a zippered pocket. The driver did take our pictures part way along. 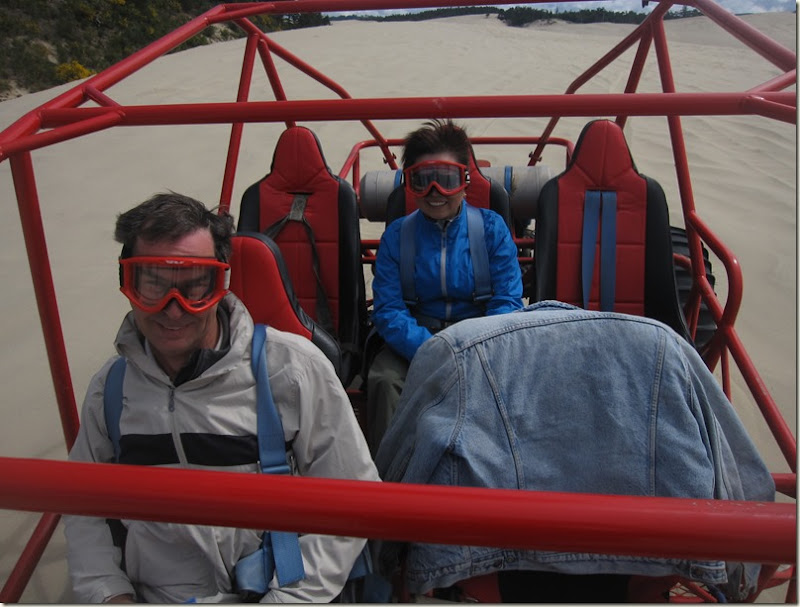 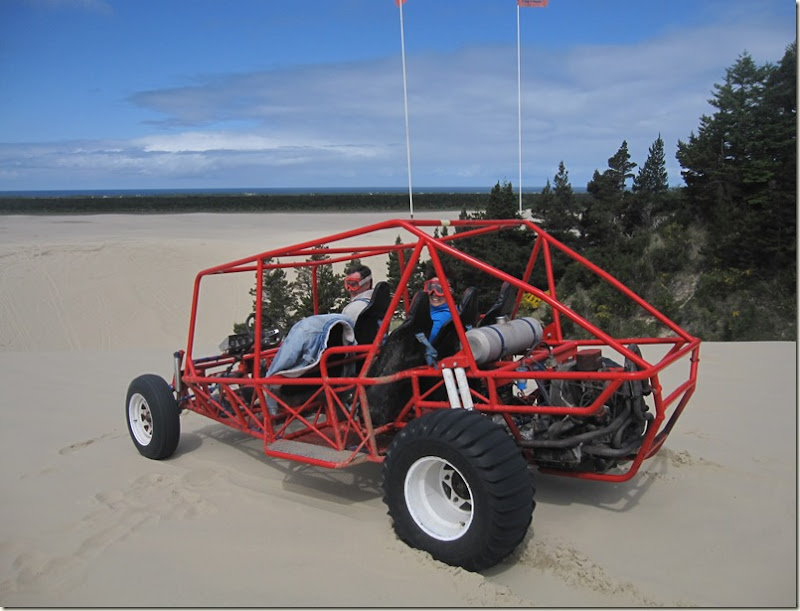 It was a blast and it took about 1/2 hour afterwards for my pulse to calm down.

In the afternoon we hiked the Oregon Dunes trail in the National Recreation area. From the map it said it was a loop of about 1/2 miles to the beach, 1 mile along the beach, 1/4 mile back into the to the dunes and about 1.5 miles along the dunes back to the start. 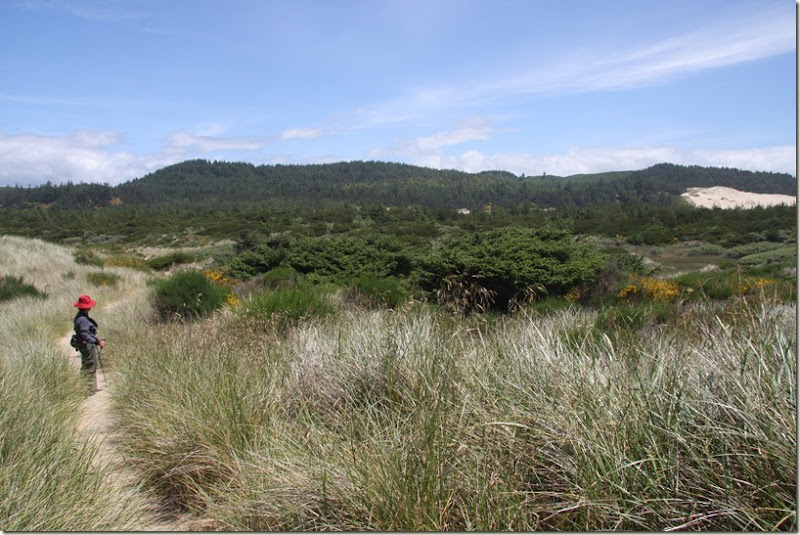 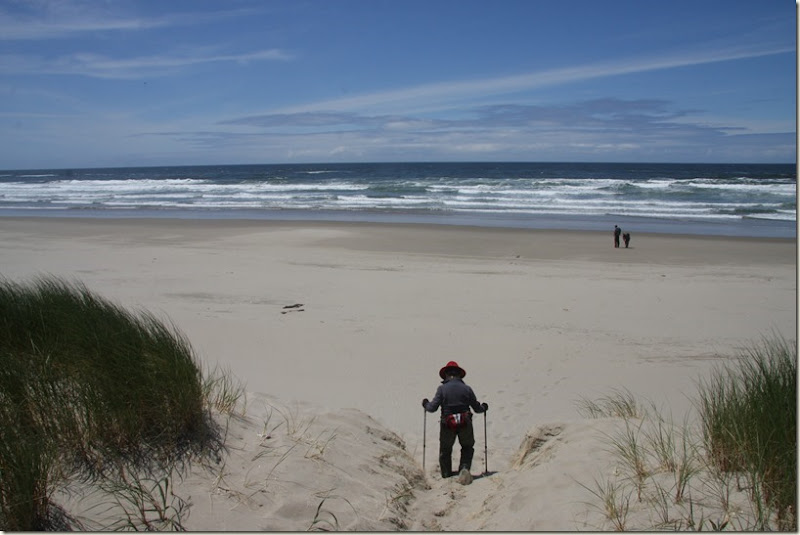 We started walking along the empty beach and it just seems endless.  There was one other couple in sight. 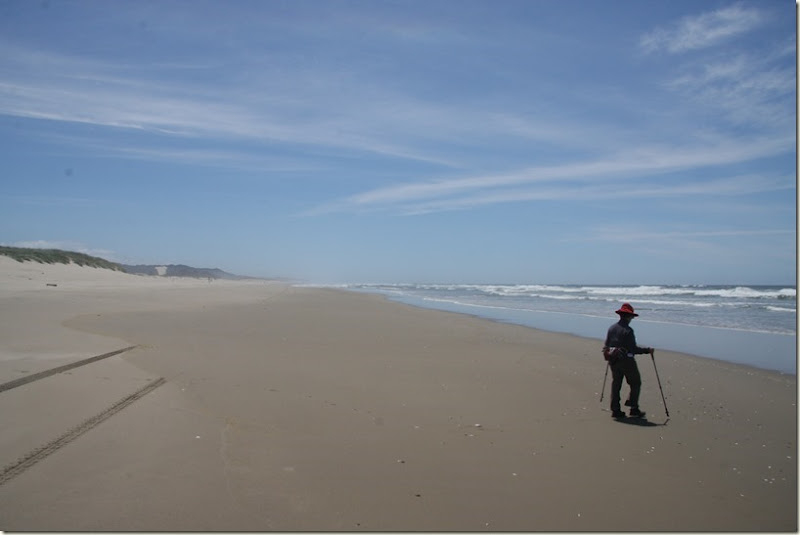 It is so hard to judge distance but it sure felt longer than a mile until we finally found the little ribbon tied to a stick marking the start of the loop back. Crossing the grassy hills and a bit of forest we came to this river bend which was quite pretty. 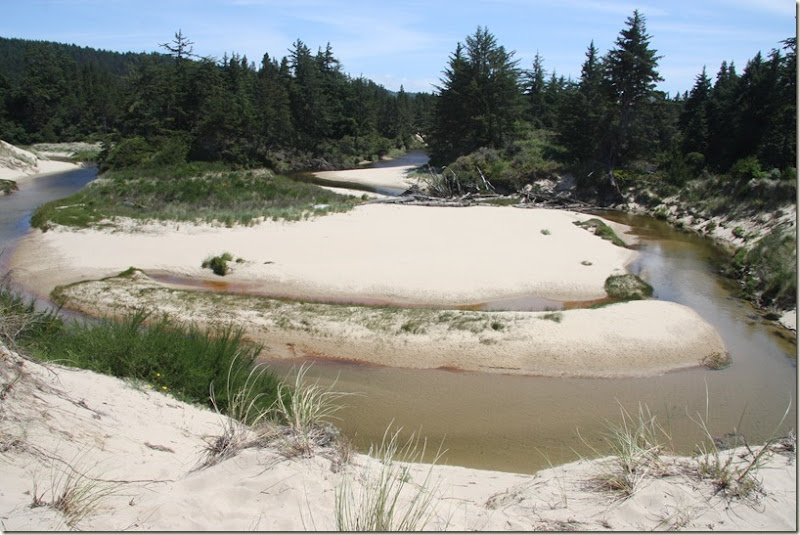 Once the trail got to the dunes there are supposed to be marker posts in sight of each other for you to follow. There was one beside us but we could not see the next one and there were no footprints as the wind was quite heavy and erased them quickly. So we just took off in what seemed like the right direction. We occasionally saw prints but realized they were all animal, probably deer. 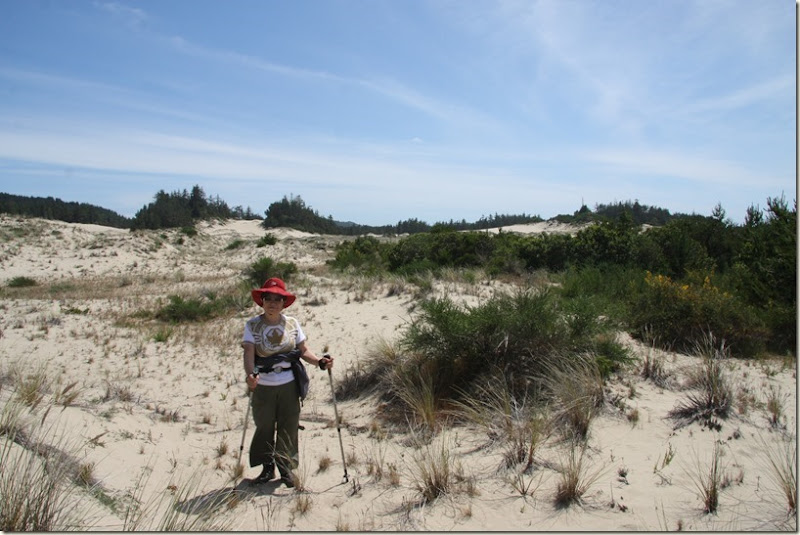 After about a 1/2 mile of being off track wondering if we were going to be blocked by some cliff or river we climbed up a hill to have a look and about 1/2 way up, there was the path. Talk about relief. The rest was just a hot trek from post to post through the dunes. 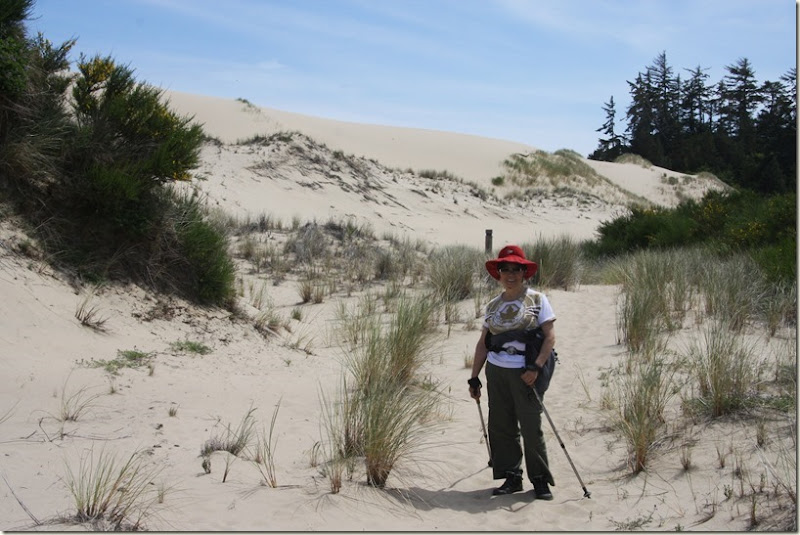 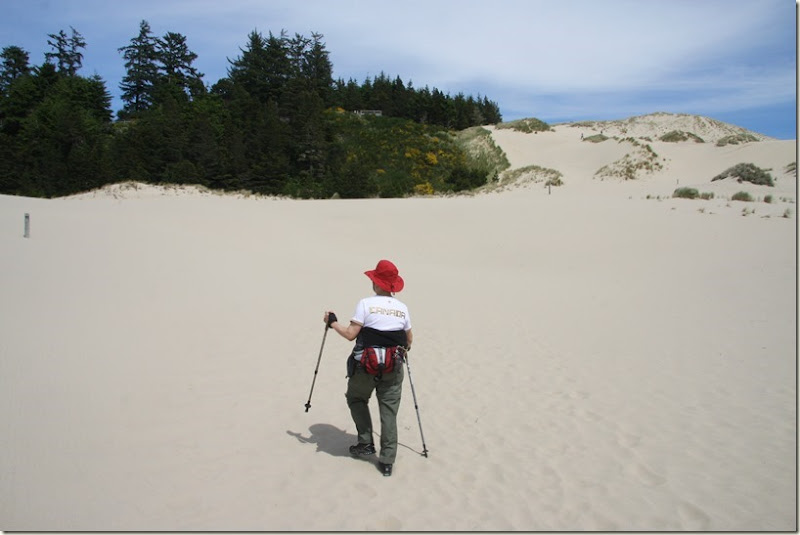 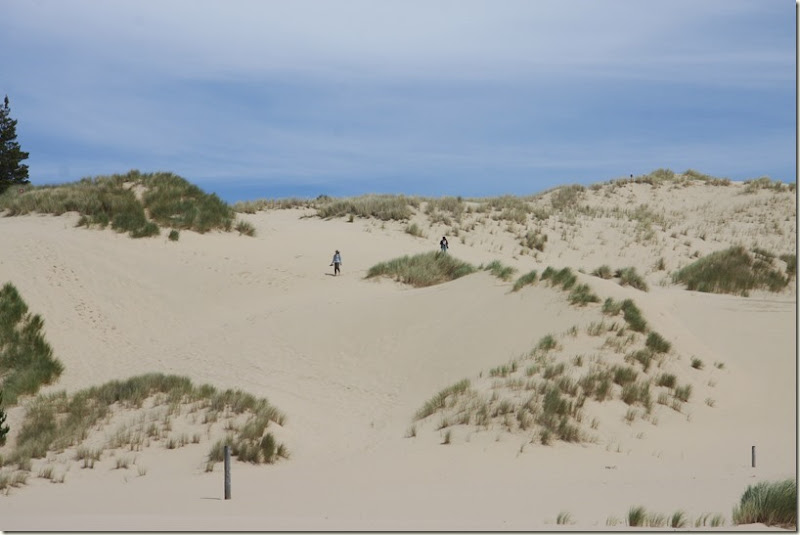 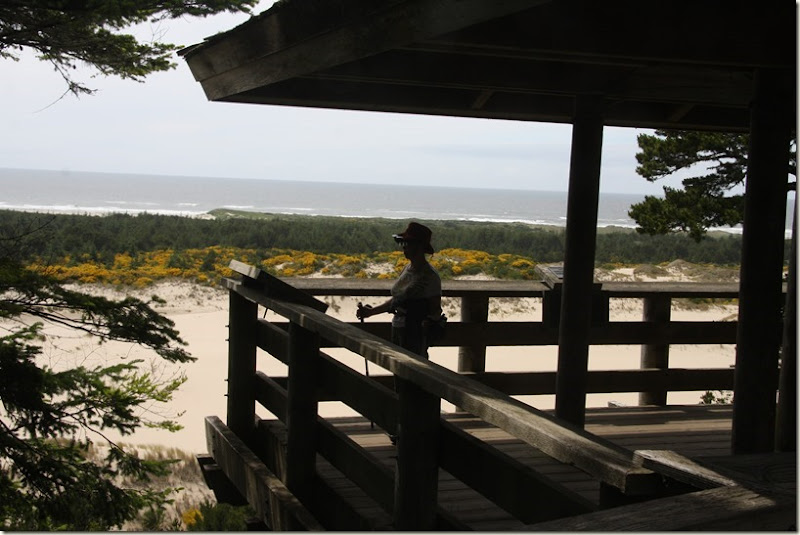 That evening we met up with Mike and Jane (friends from home who are happen to be in a rented RV going down the coast at the same time). They are at a campground a little up the coast so we met in the middle at a seafood restaurant in Florence. We had a good meal and a lot of talk about how much we all like the RV experience. I think I see one of their own in their future. 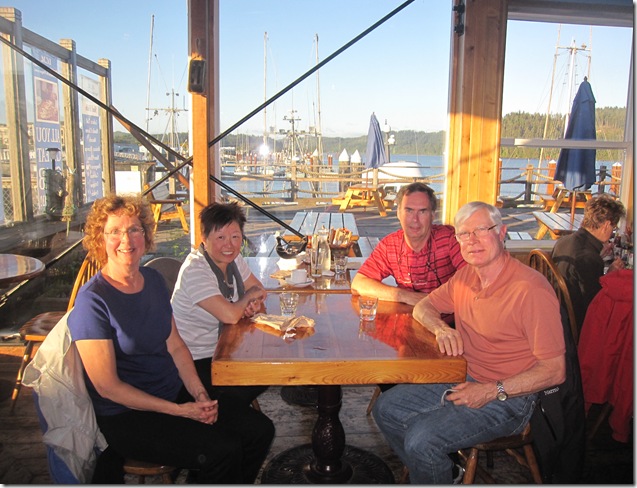