What we thought was just going to another hiking day turned out to be rather unusual and quite wonderful. It is kind of a long post but worth it.

We went back south to Prairie Creek Park to hike a trail called Fern Canyon. The trailhead is down a road about 10 miles off the highway. You now things are going to be a bit different when not 100 yards from the highway there is a permanent sign saying “Flood”. 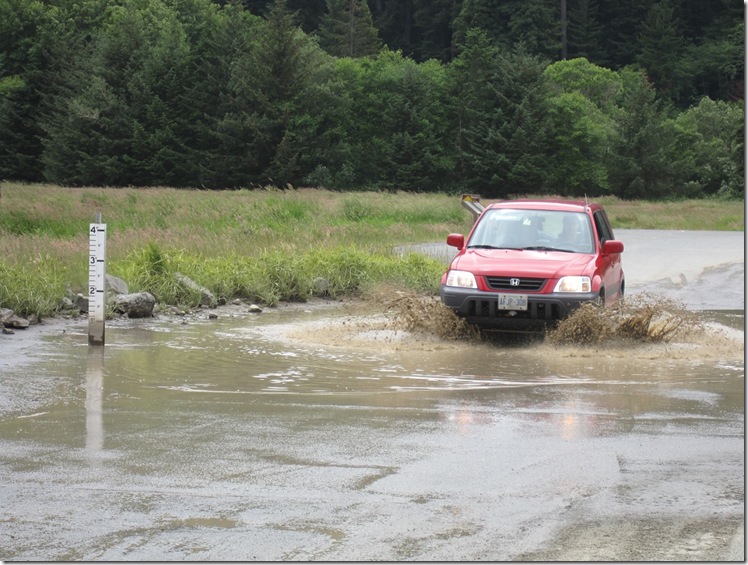 Currently only about 6 inches deep but note the depth stick at the side. This was on the paved section. Then it turned into another single lane muddy dirt road. You actually had to ford a few little streams. 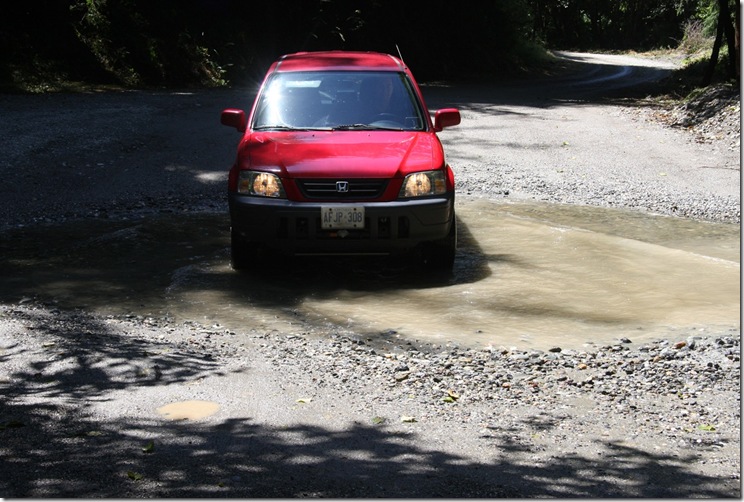 We had almost given the CRV a car wash after yesterday. It would have been a waste. At the time we bought the CRV, Stuart wasn’t exactly happy with Jennie’s choice but now he is much happier with it since it has 4WD, lots of clearance and we can tow it behind the RV. We are much more relaxed about going down these somewhat dicey roads than if we had a car.

On the way we passed by a herd of elk. 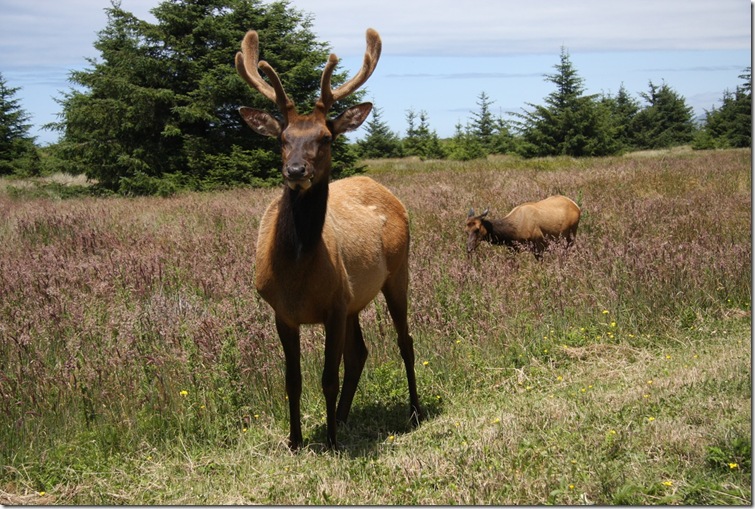 Note the campers in the background below. Each campsite had a big metal box to safely store their food. 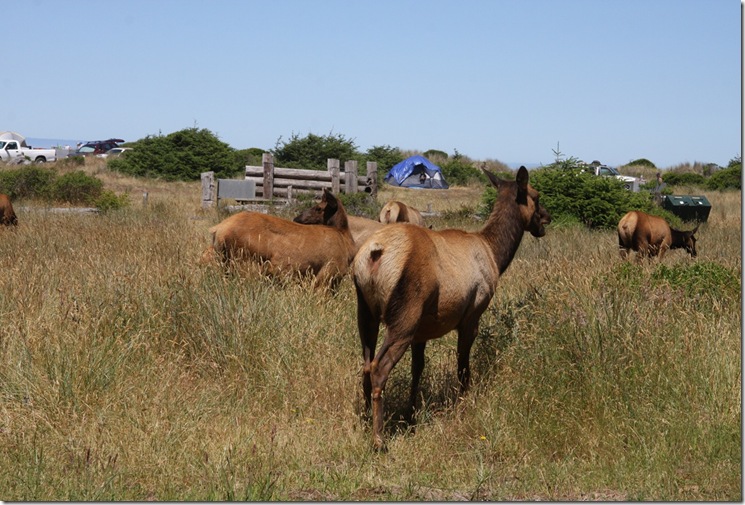 Once we got to the trailhead it was almost full with about 15 cars. Again I would have expected to only see SUVs but we saw a different Mustang GT.

The trail itself is only about 1/2 mile but with a difference. You hike out a few hundred yards and then you see this. 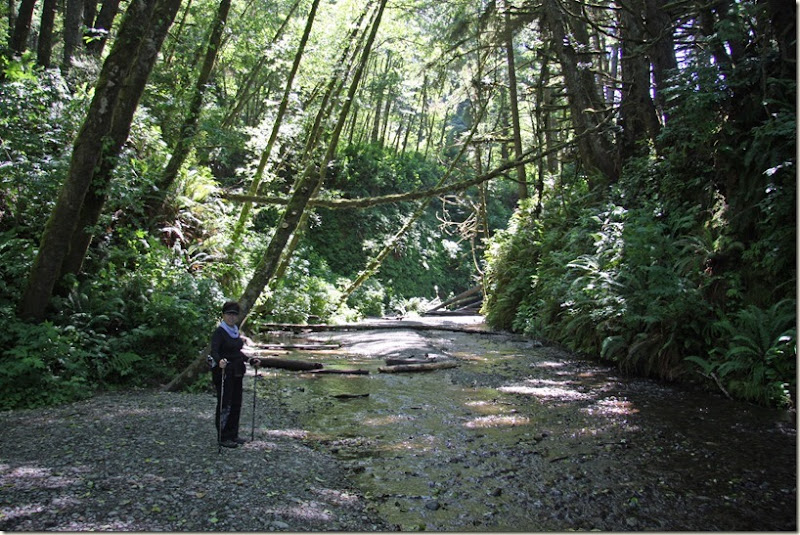 There is no real trail. You just work your way upstream sometimes walking in the shallow water, sometimes balancing on strategically placed logs or just climbing over trees that have fallen into the canyon and it really is a canyon. 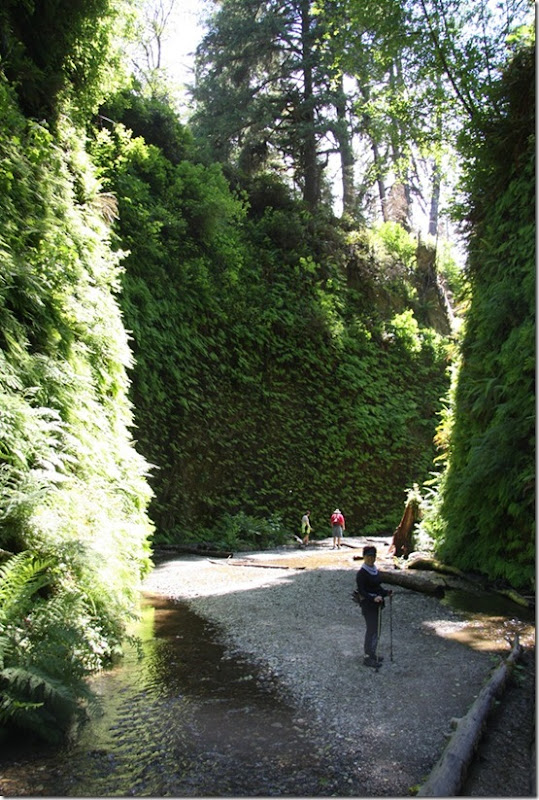 I estimated the walls were about 60 feet high, vertical and covered with ferns. I’ll let the pictures do the talking. Quite a magical place. 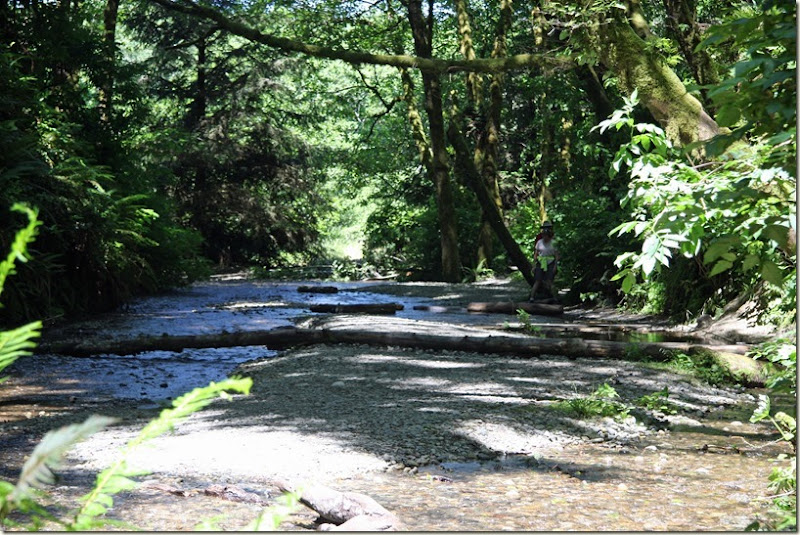 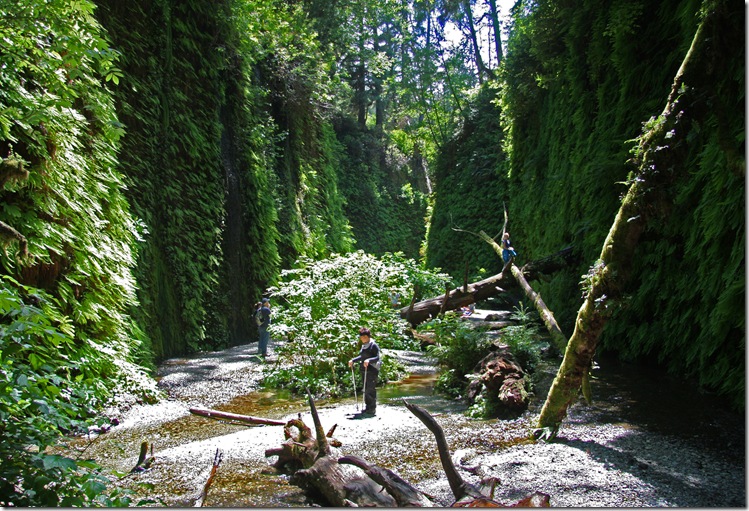 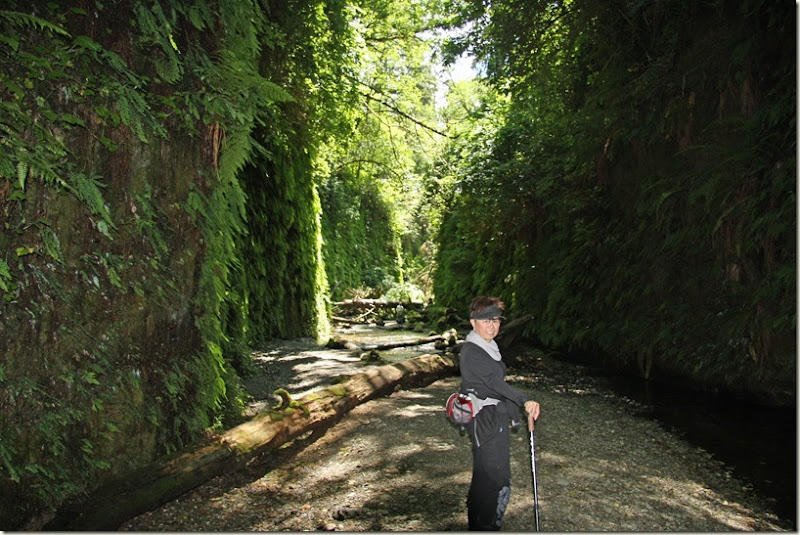 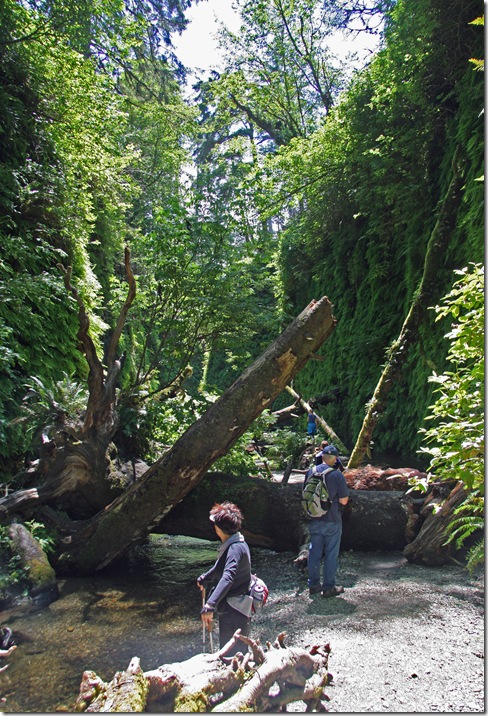 Don’t miss Jennie in the picture below. She needed some brighter clothes. She wasn’t thrilled about the balancing parts of the walk but her hiking sticks helped a lot. 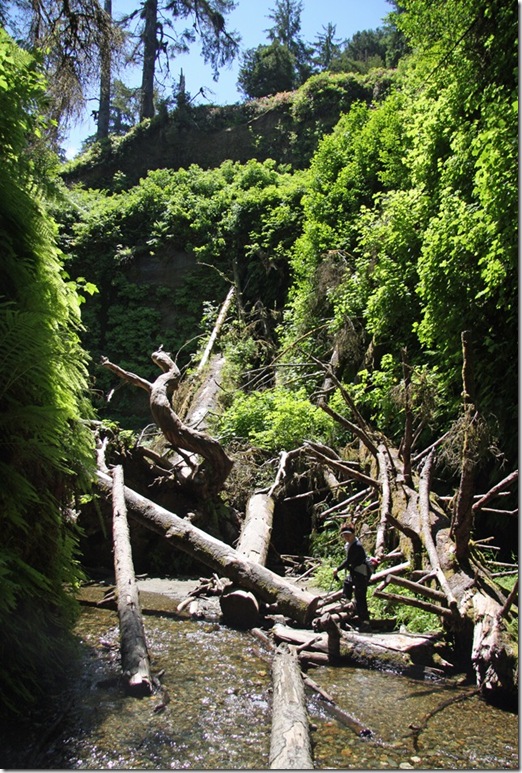 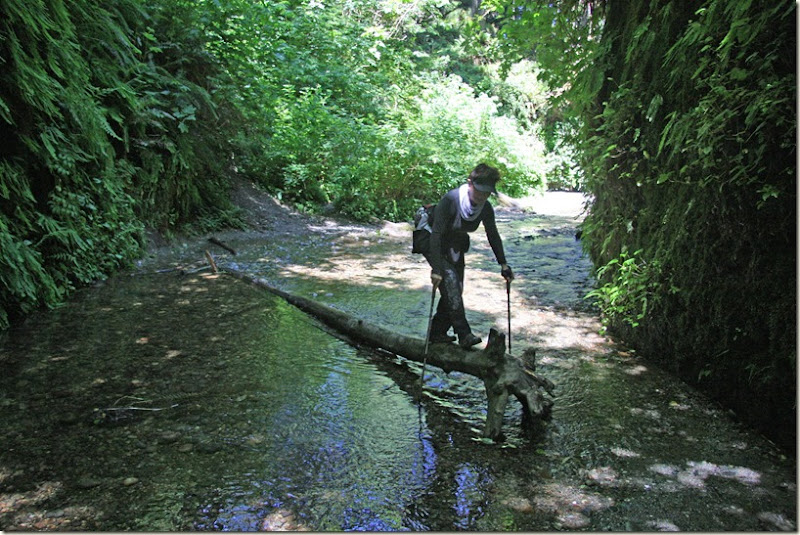 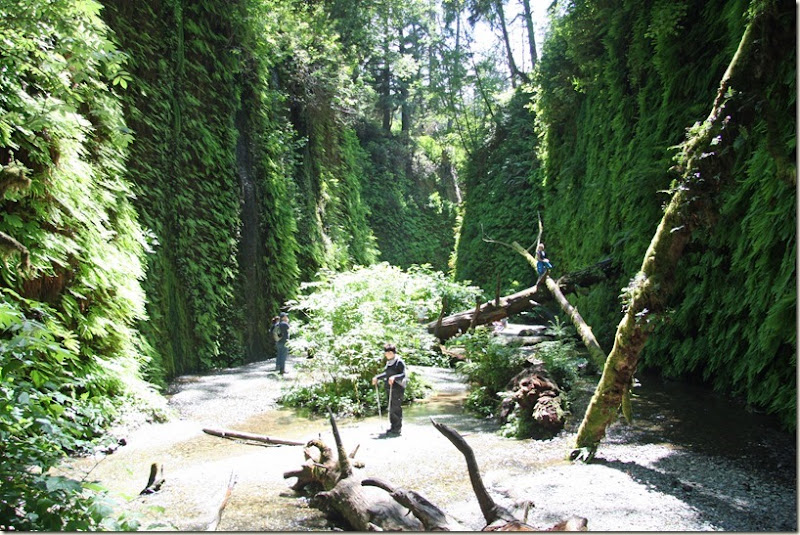 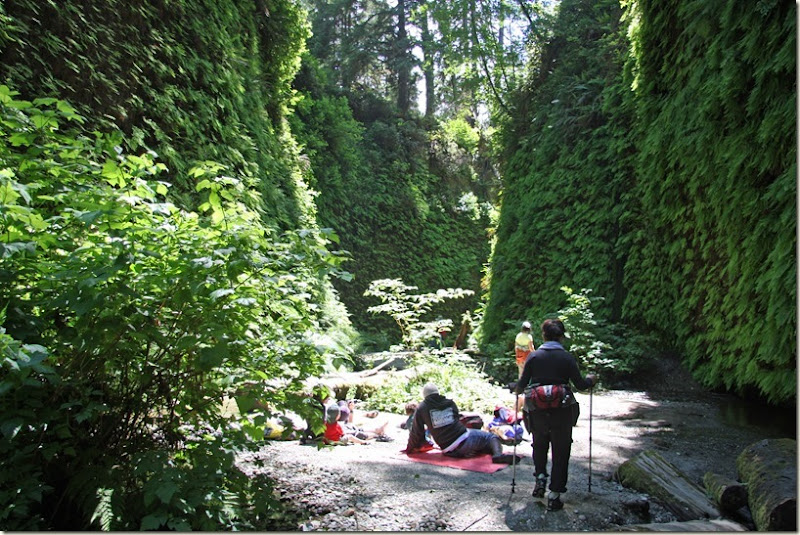 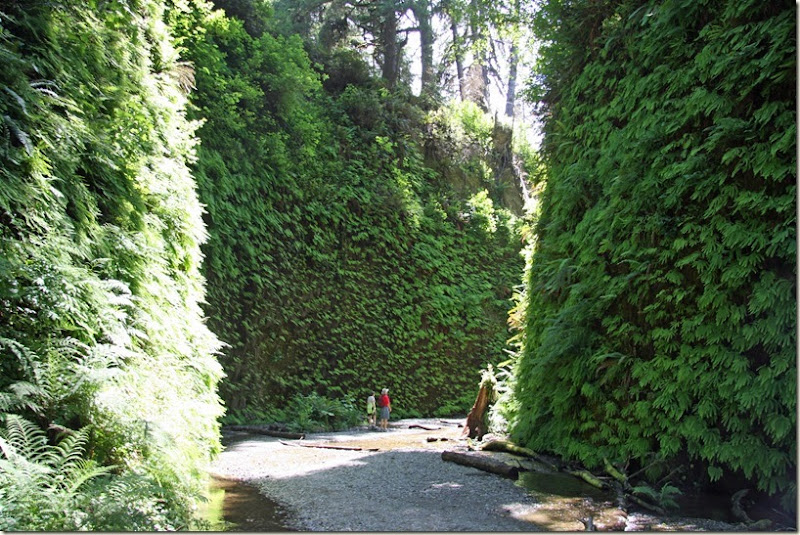 After a while there were some stairs up the side and you walked back along the top. 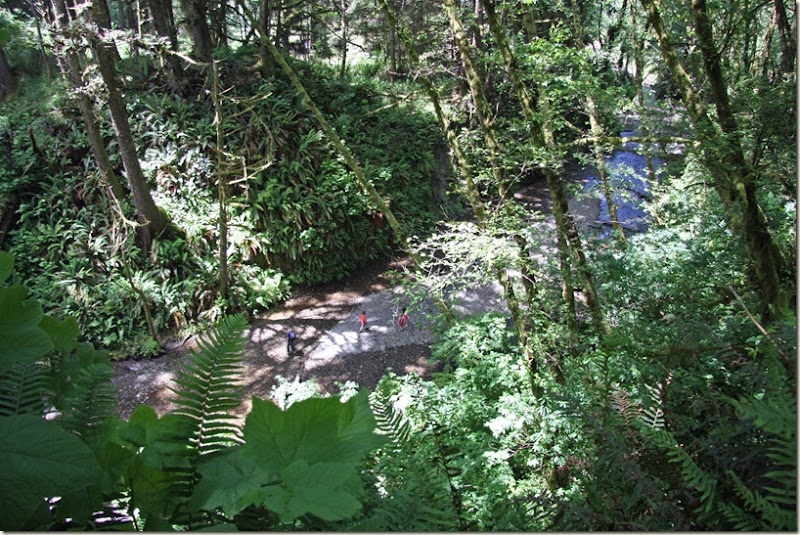 Since, as usual, the hike took longer than expected we found there was a beach close by so we had a late lunch while being watched by a friend. 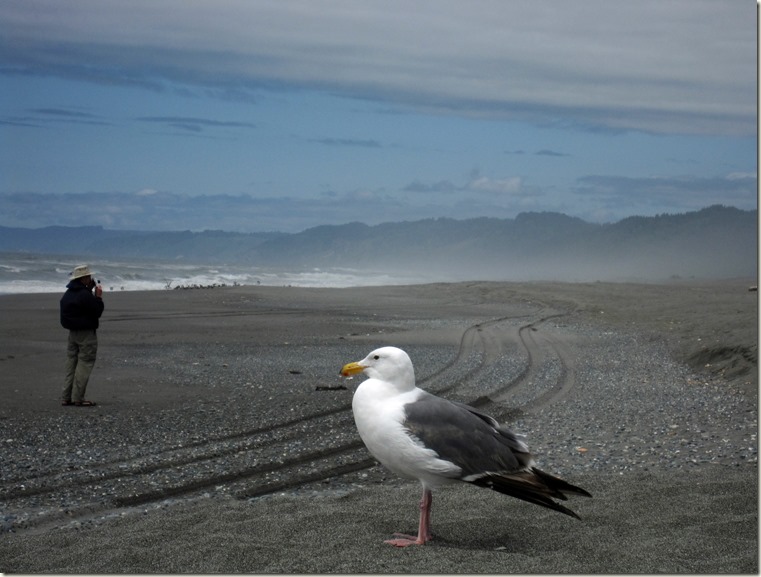 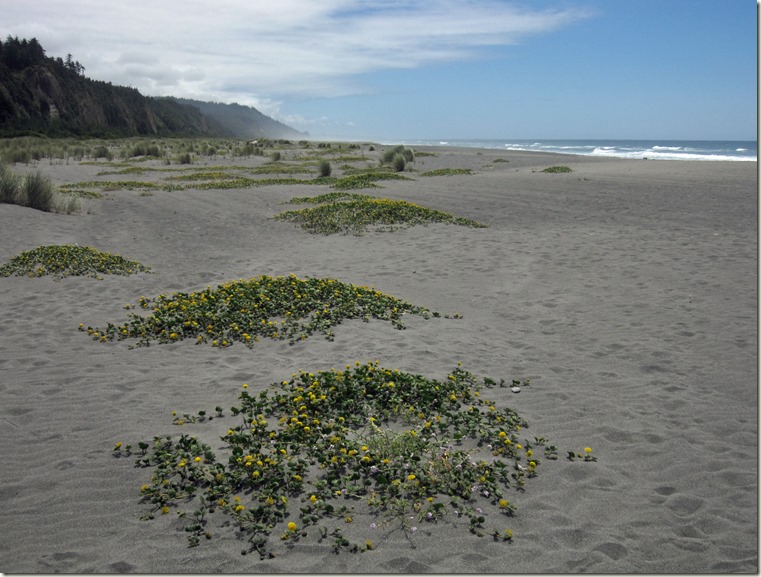 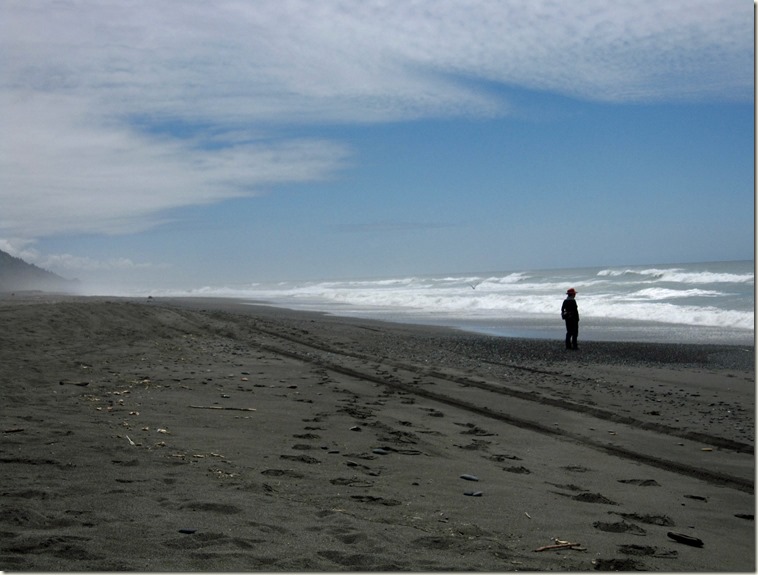 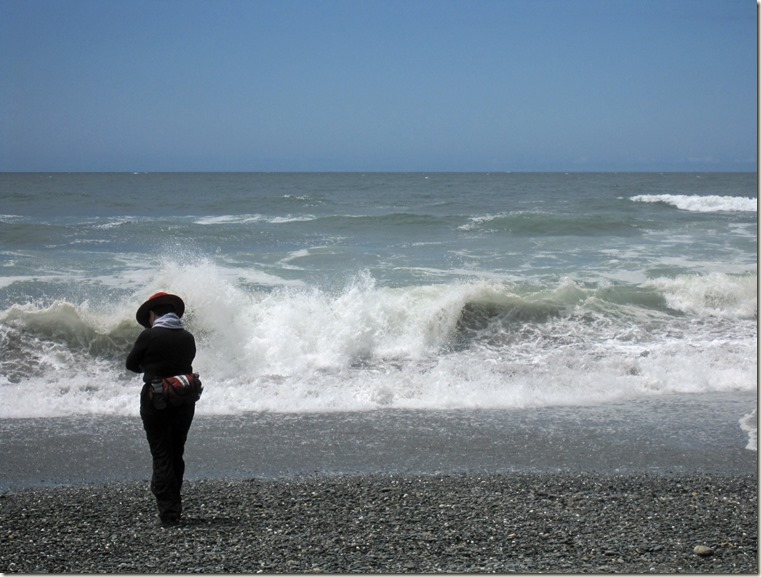 Then it gets really weird. As we are leaving tomorrow we took one last drive through the redwoods and see this at one of the trailheads. 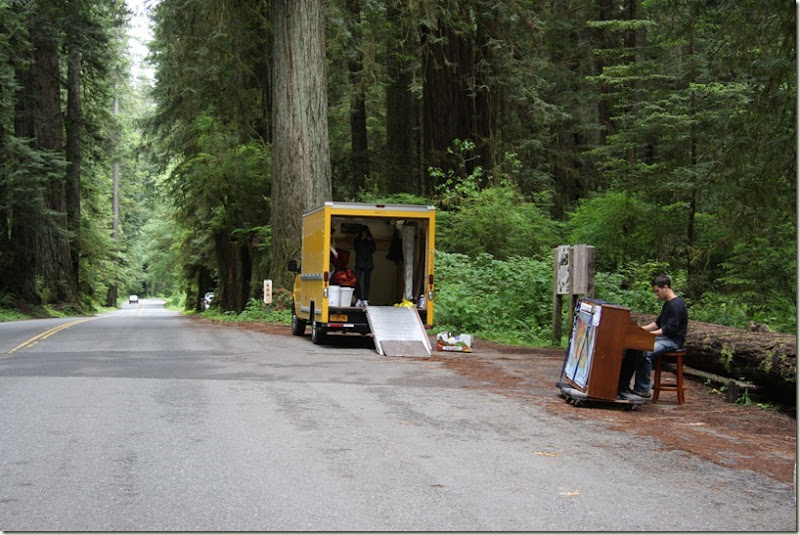 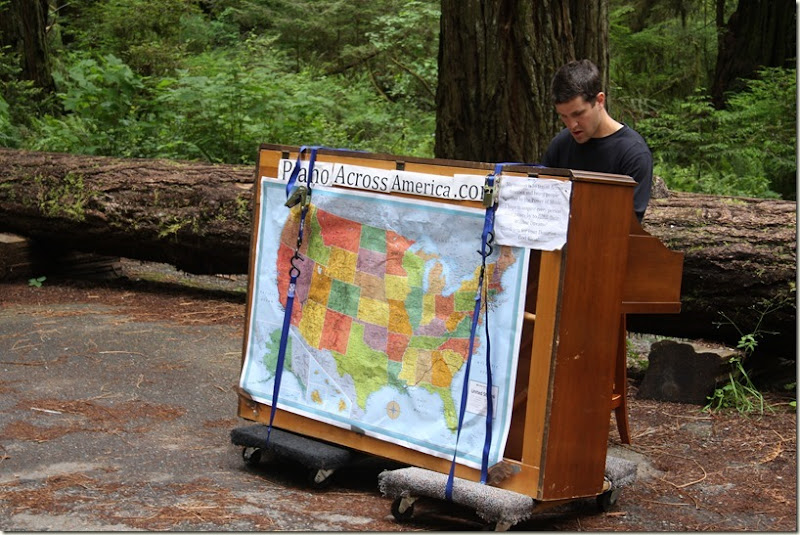 This guy from New York driving a yellow box van has wheeled out his piano and serenading anyone who is nearby.  The sign on his piano says his mission is to travel across America uniting people with his music so we sat for a while listening and staring at the giant trees.