It looked like a nice day so we decided to go to Cape Kiwanda, which was the third cape we skipped the other day. When we got there we found you could drive out on the beach. 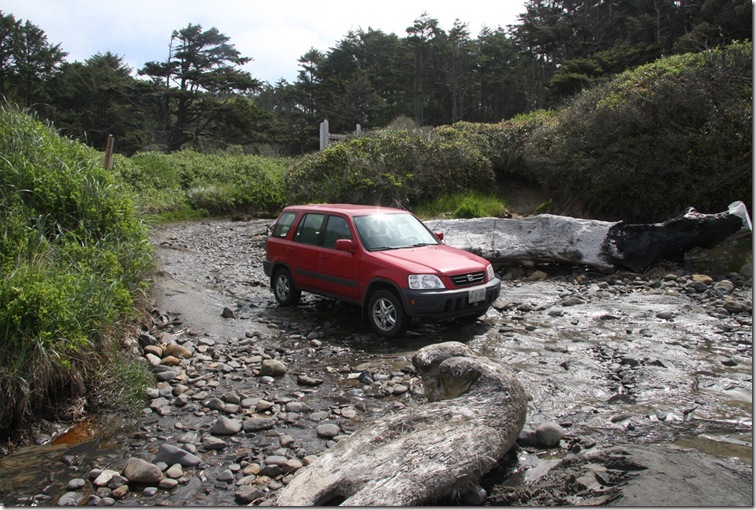 Once on the beach it looked much like many others until we drove right to the end and saw a huge mountain of sand that needed to be climbed; so we did it.  It was exhausting scrambling up so we sat on the summit to have lunch and rest. 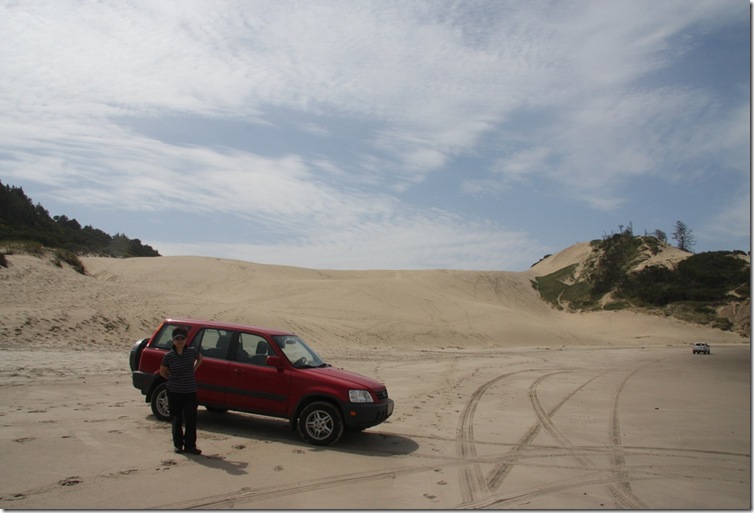 It doesn’t look like much looking up but… This was the view from part way up and you can barely see the CRV as the closest car in the distance. 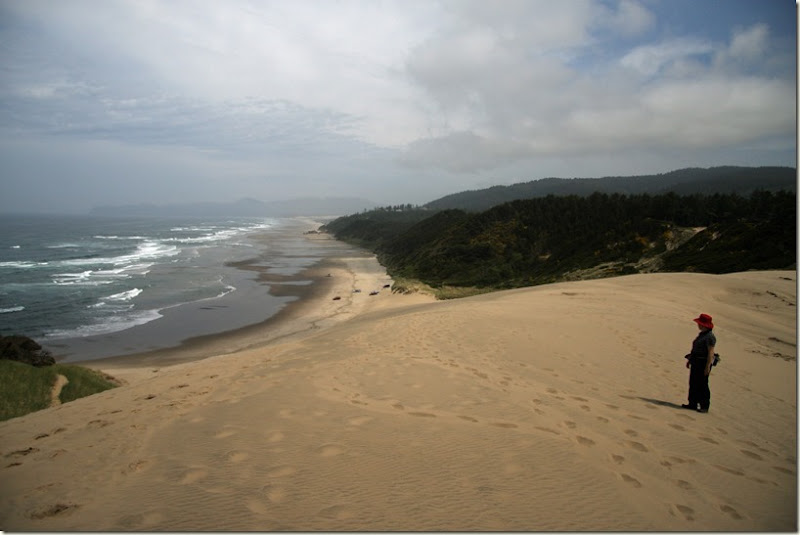 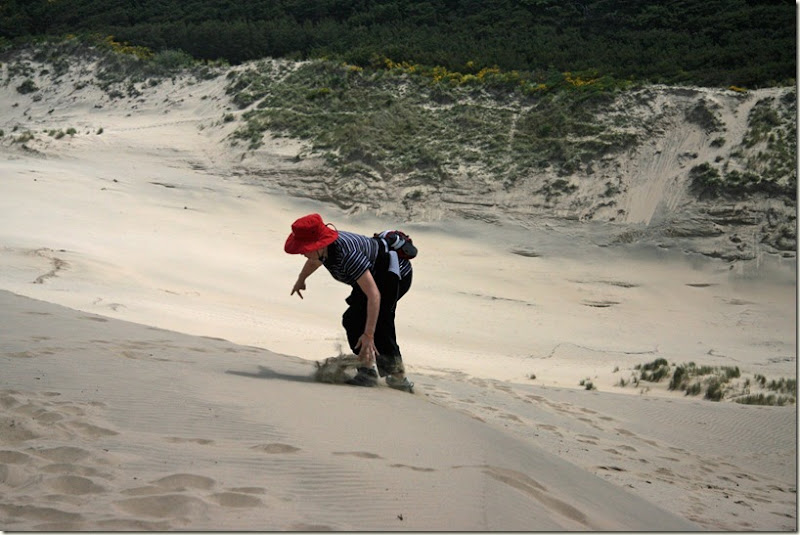 The judging distances was very hard. The top looked close but then you can see the tiny people up there. 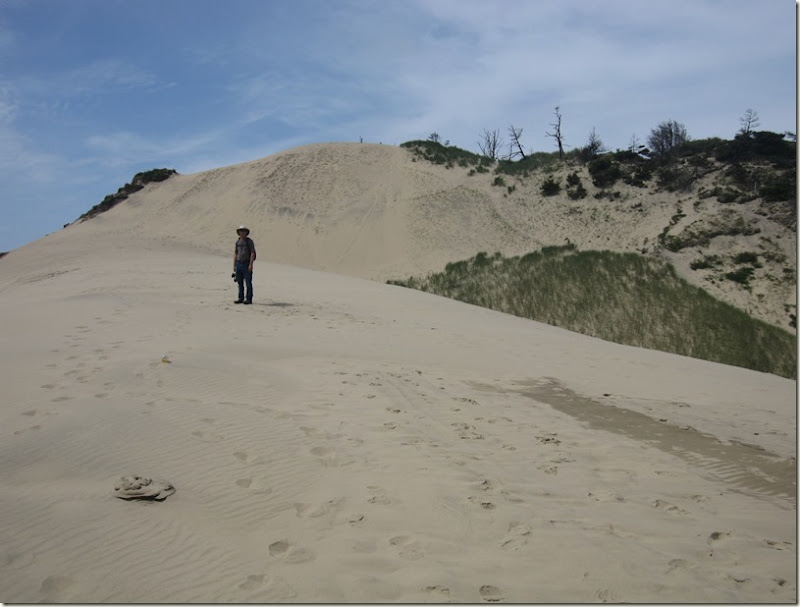 The view out at the end of the cape. 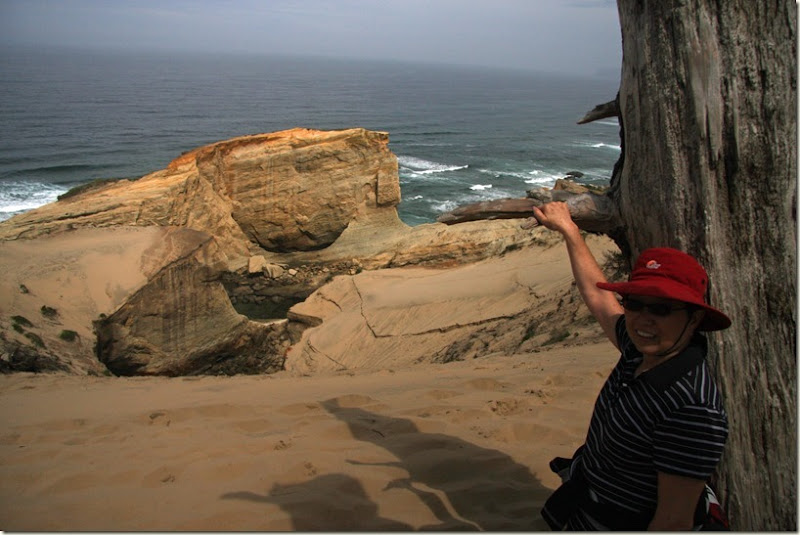 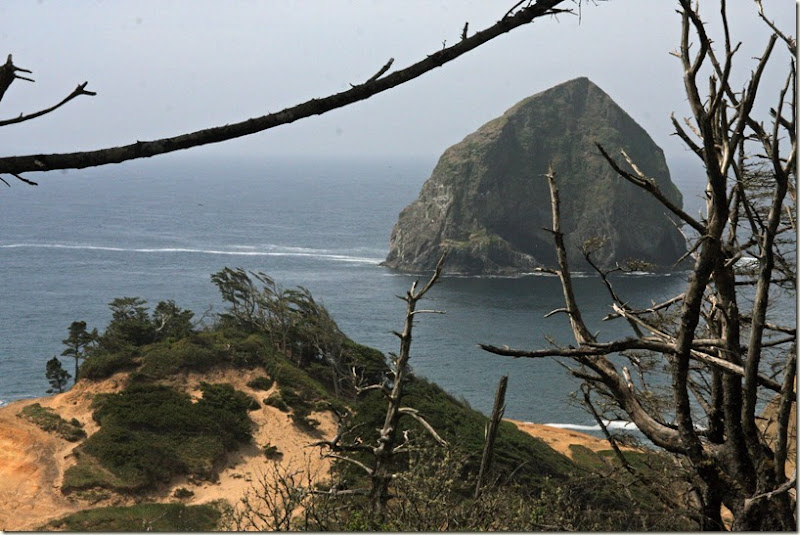 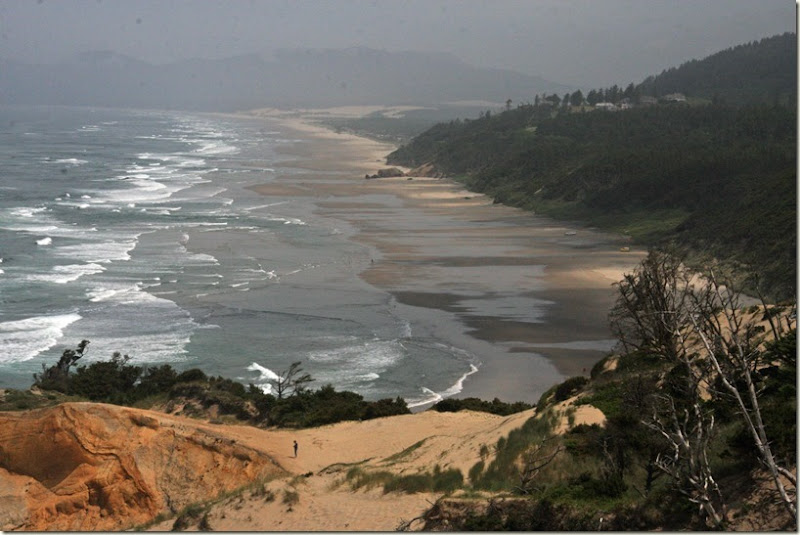 Looking down on the beach on the other side. It was closer to town and was packed with beach goers. 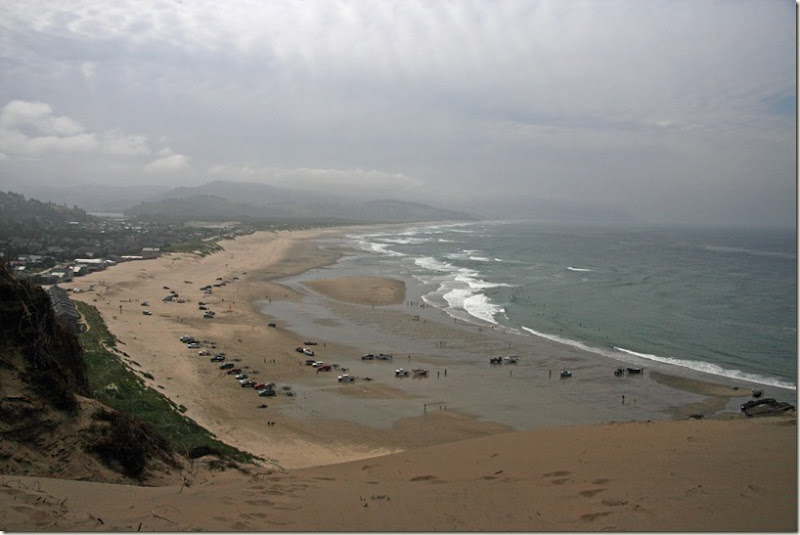 Heading back down was much easier and much more fun. 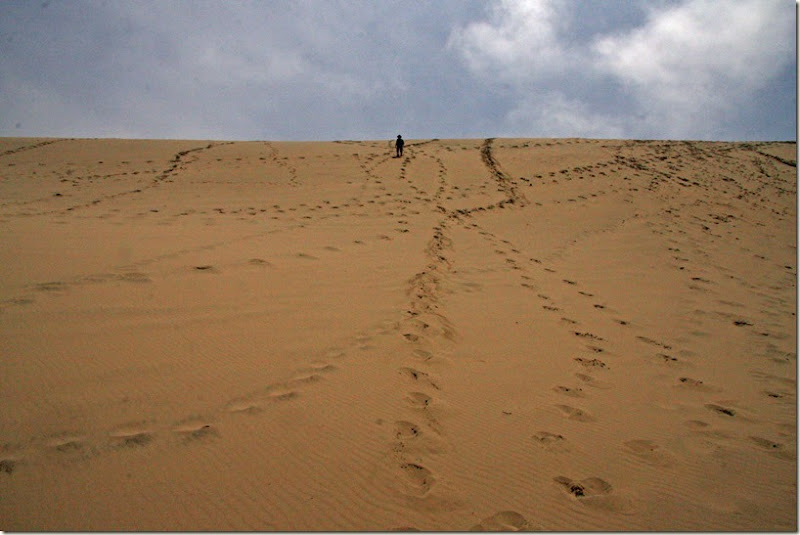 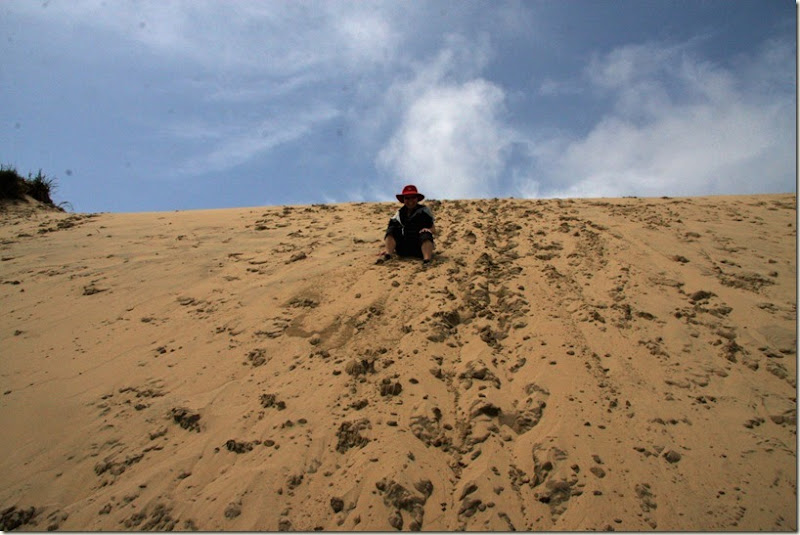 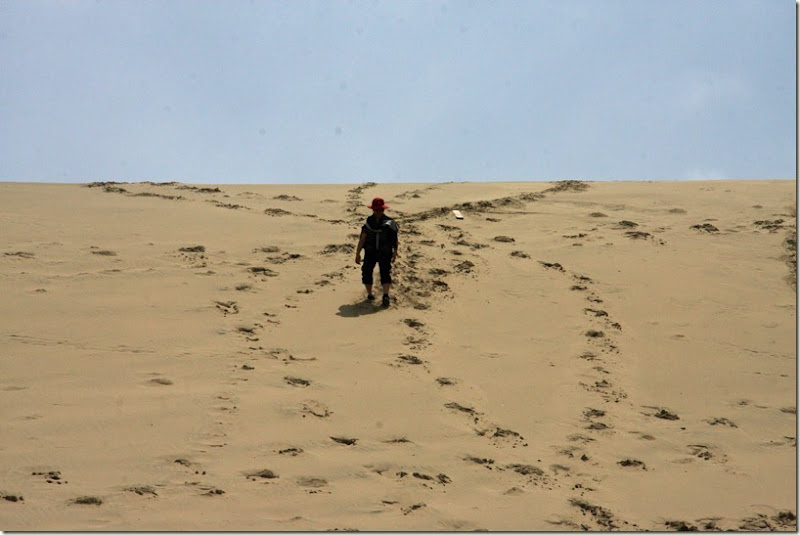 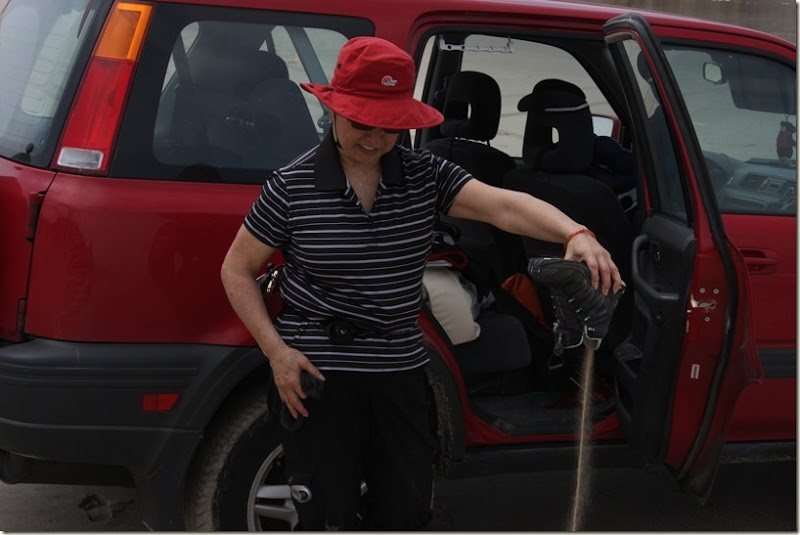 On our side of the dune the beach had only a few visitors, 2 of which were teaching another person to hang glide. 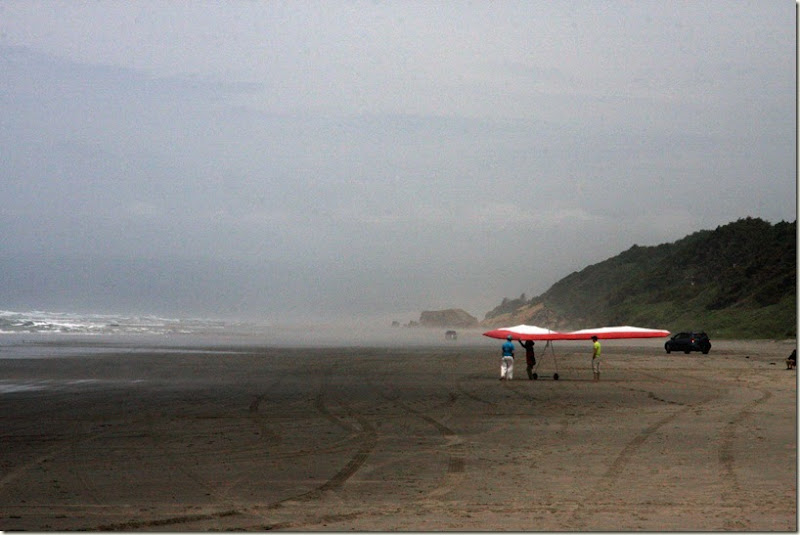 We drove around to the beach on the other side. The cape doesn’t look very big from farther away. 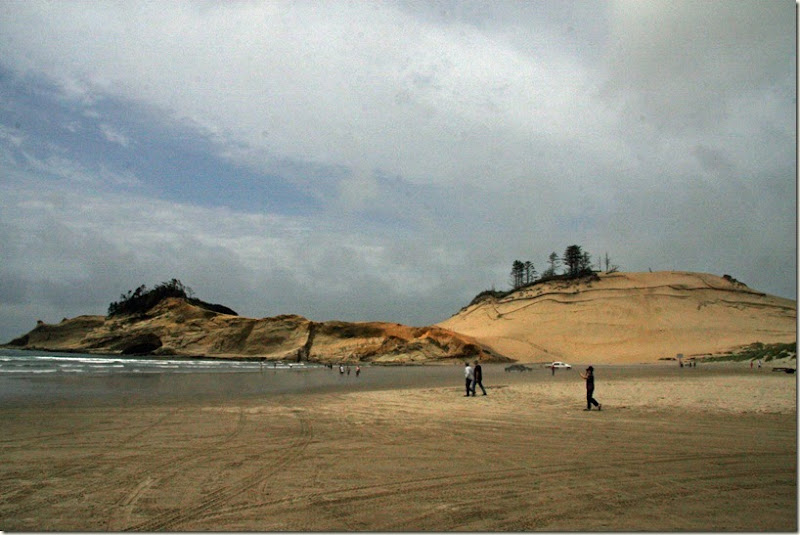 When you get closer you get a better idea when you can barely see the specks of two people in the middle of the climb in the picture below. This side of the dune was much steeper. 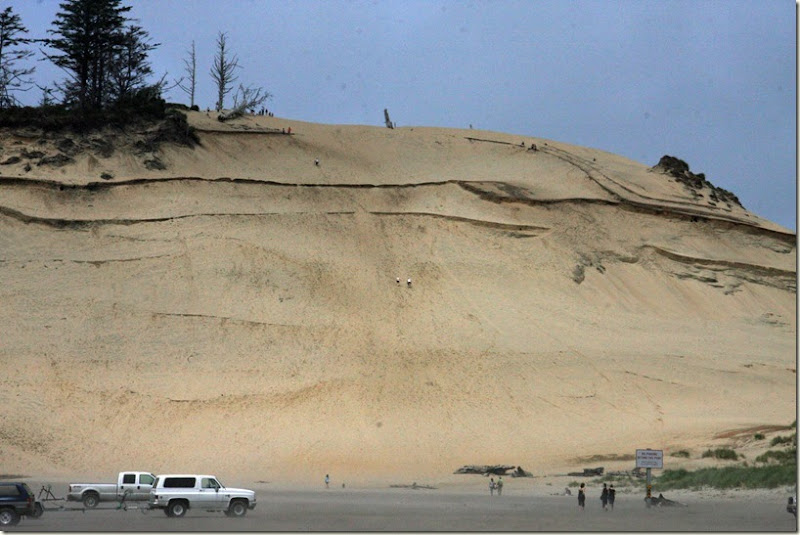 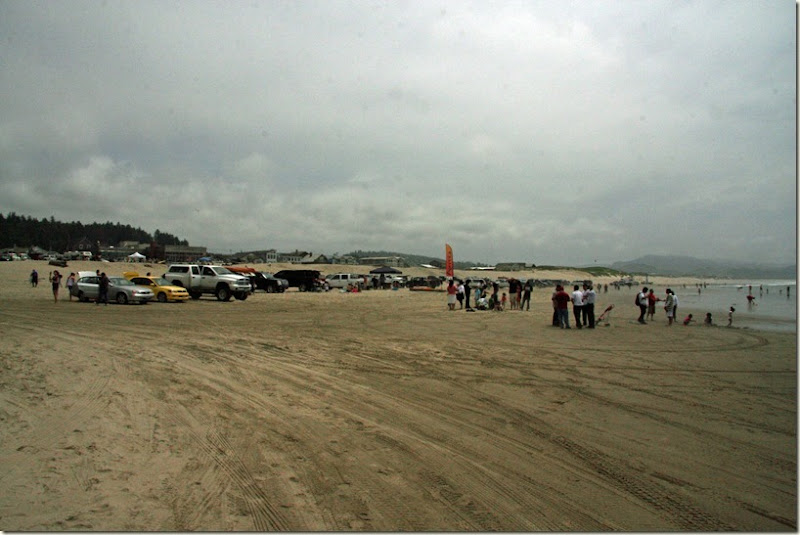 On our way to our next stop we crossed this bridge. 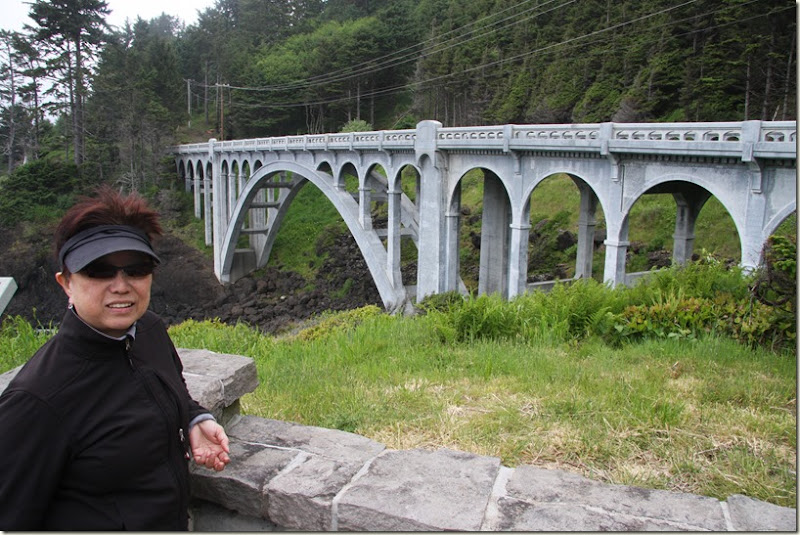 The stop was Cape Foulweather, which has a gift shop and lookout at 500 feet above the ocean. 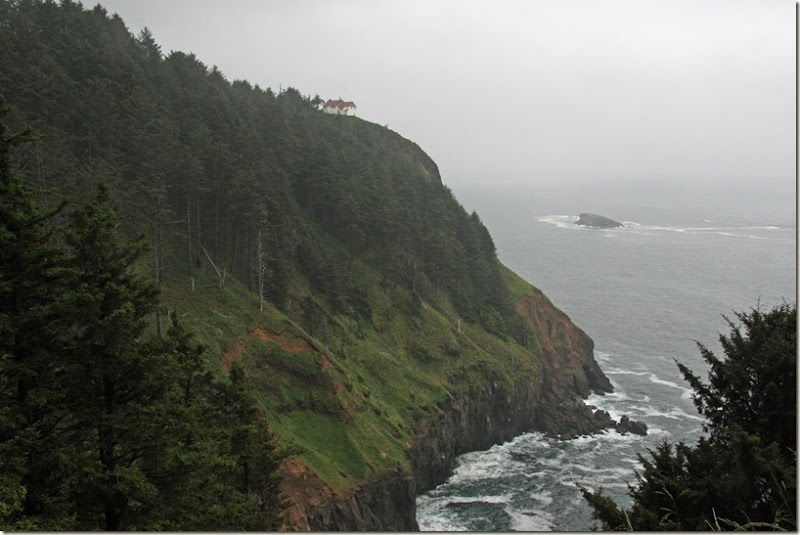 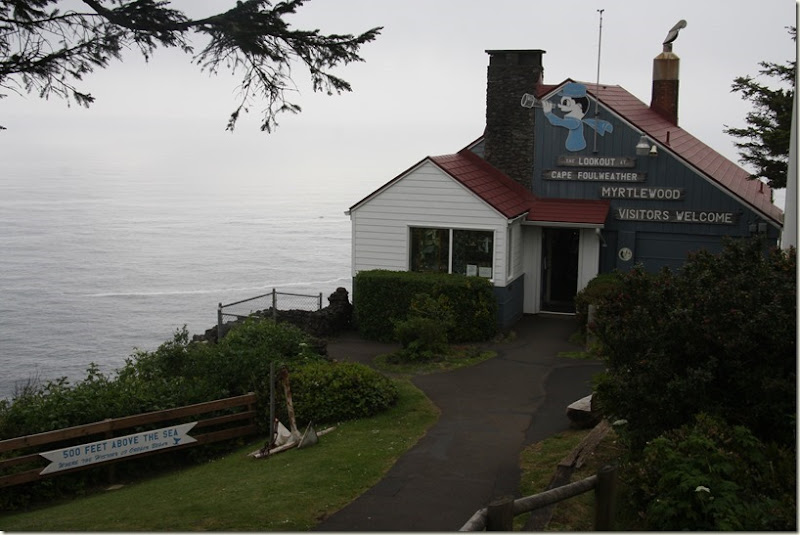 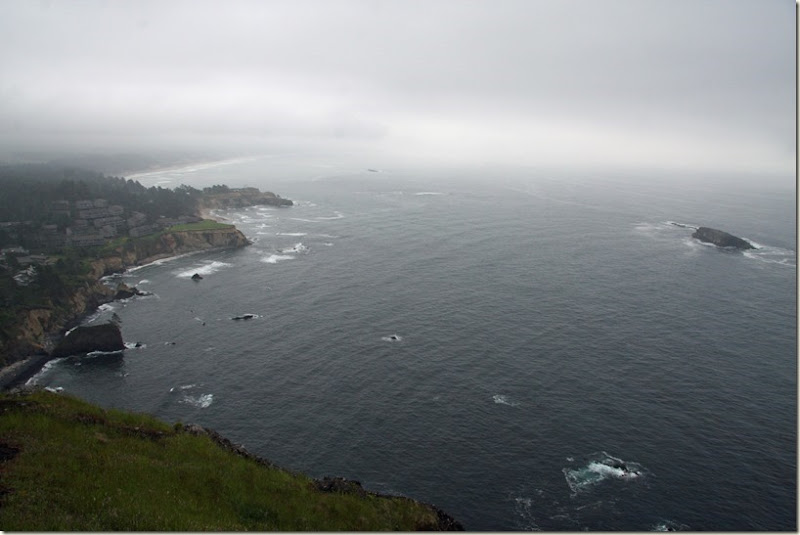 Checking out the gift shop. 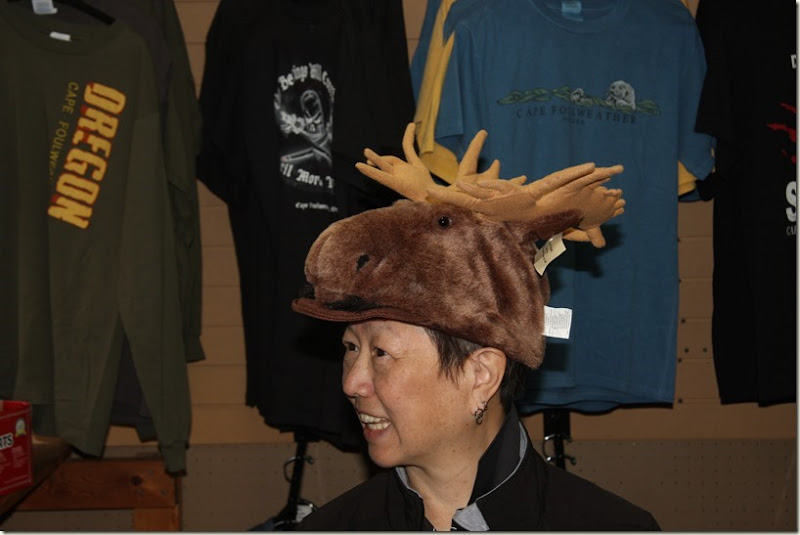 From the lookout we saw our second whale, feeding in the kelp and saw our first ever peregrine falcon, perched on the cliff below. 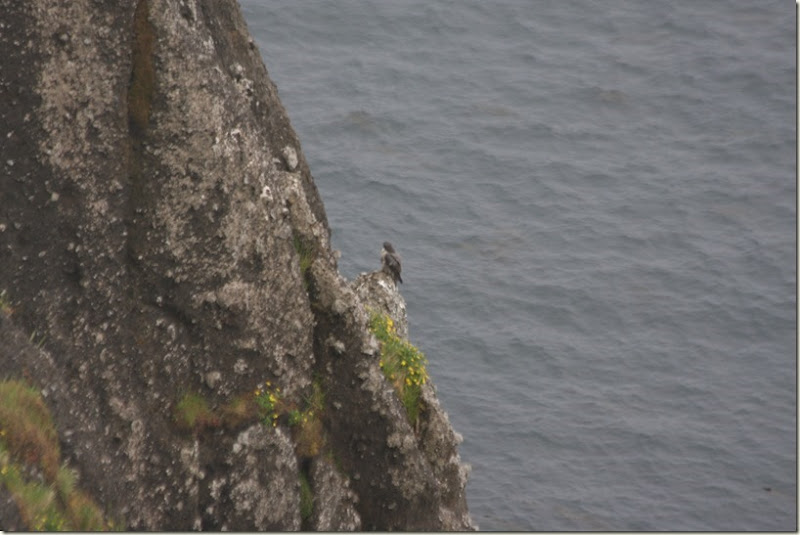 Further along the road, we stopped at another point with a formation called the Devil’s Punchbowl. There was not enough wave action today but in stormy weather it is supposed to spray up some very high plumes of water. 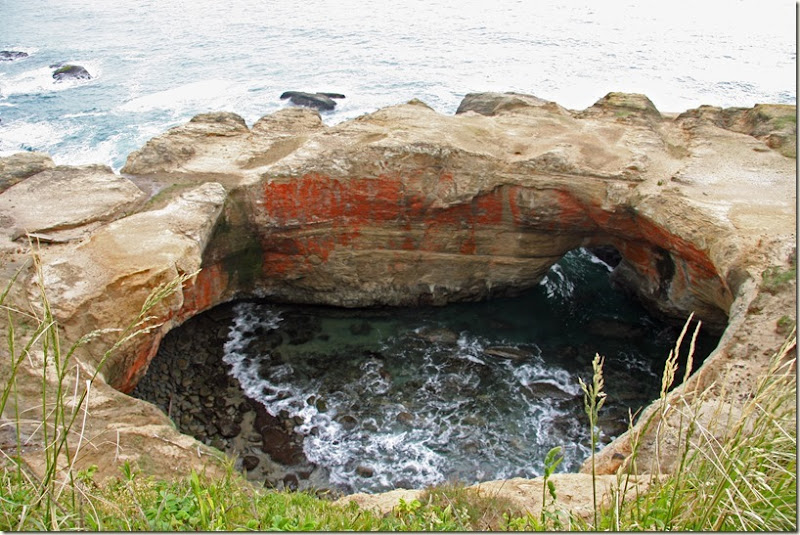 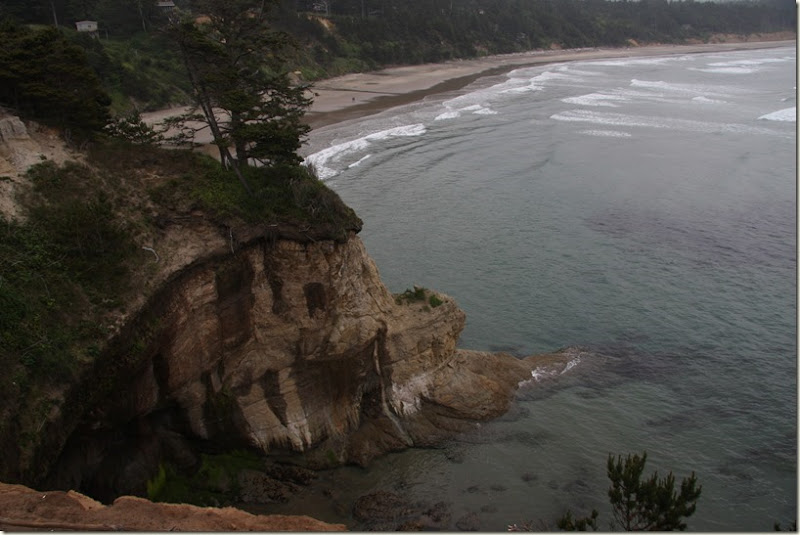 Here there was also one of a local chain of restaurants called Mo’s that are famous for their clam chowder. So in we went  for some chowder, a Seafood Bowl and a Marionberry (like a raspberry but bigger) cobbler. The chowder was good but not the best we have had. The Seaside Restaurant in Gros Morne is still the best and T. Paul’s Cafe was next and the most filling. 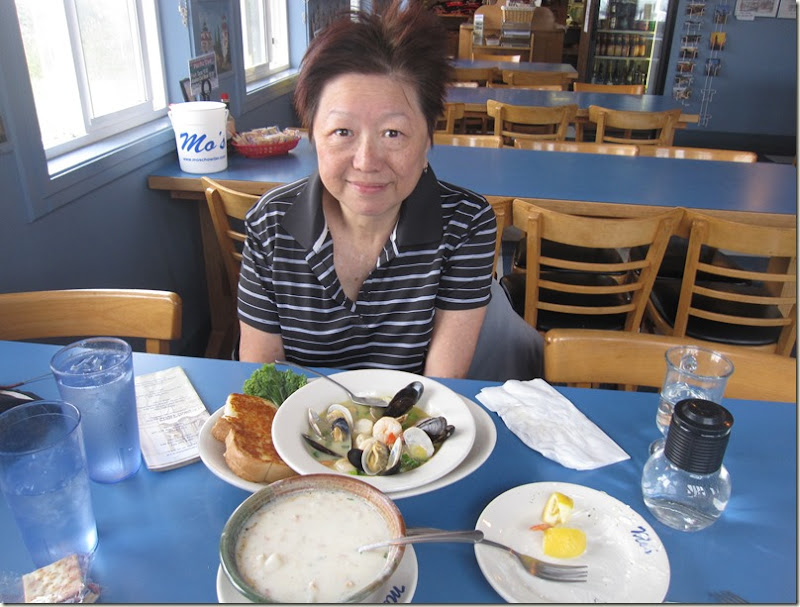 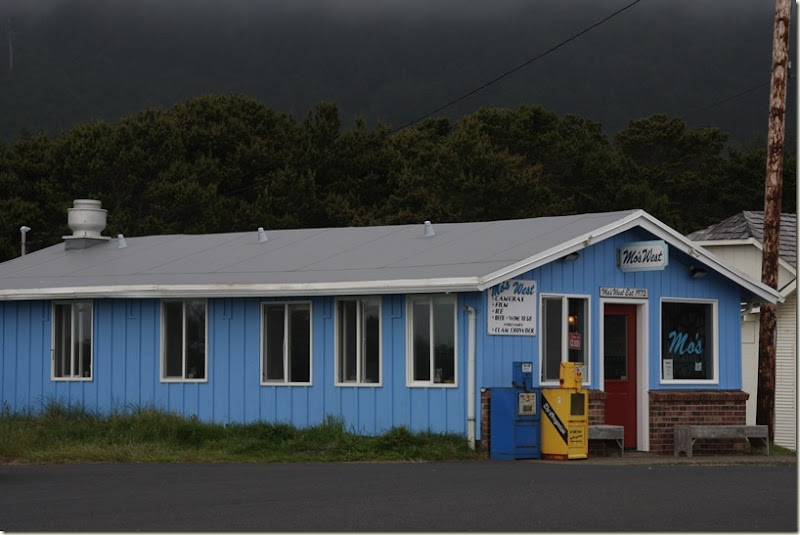 We were tire d by this time so we headed back to the RV.