This morning was a lighthouse for me and this afternoon was a beach for Jennie. After the lighthouse we went to the Pea Island Wildlife Refuge for a short walk, then crossed the highway and walked the beach on the ocean. 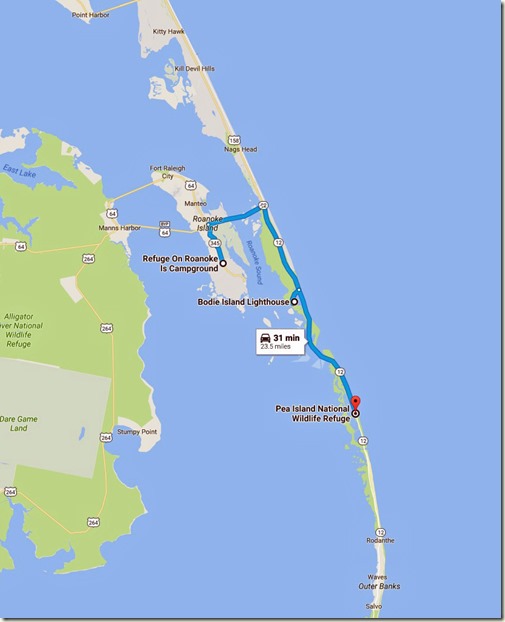 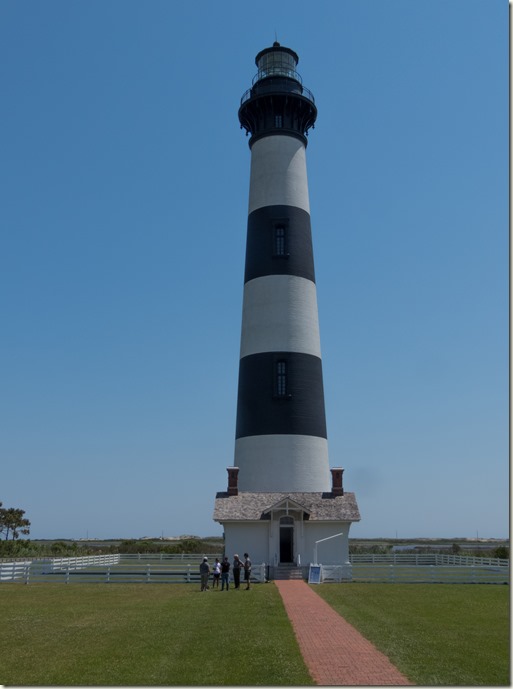 It is slightly shorter than Cape Hatteras, at just over 200 steps to the top.

Inside it is very different. Whereas at the Hatteras Lighthouse each landing covered most of the interior with only a small opening for the stairs, in this one each landing was only half so when you leaned over the railing you could see all the way to the top or bottom.

It even made my stomach tighten a few times. Looking down and then up from around the middle level. So many spirals. 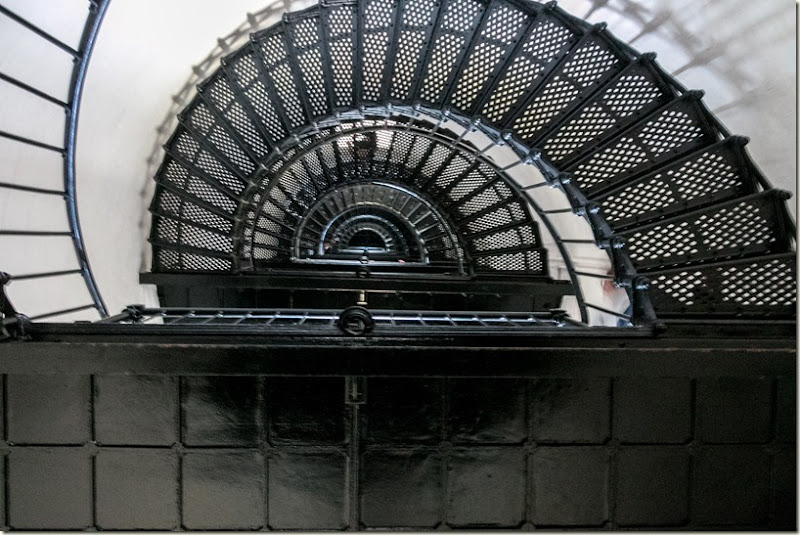 When you are climbing or coming down they say that only one person is allowed on each set of stairs. I guess that helps preserve them. 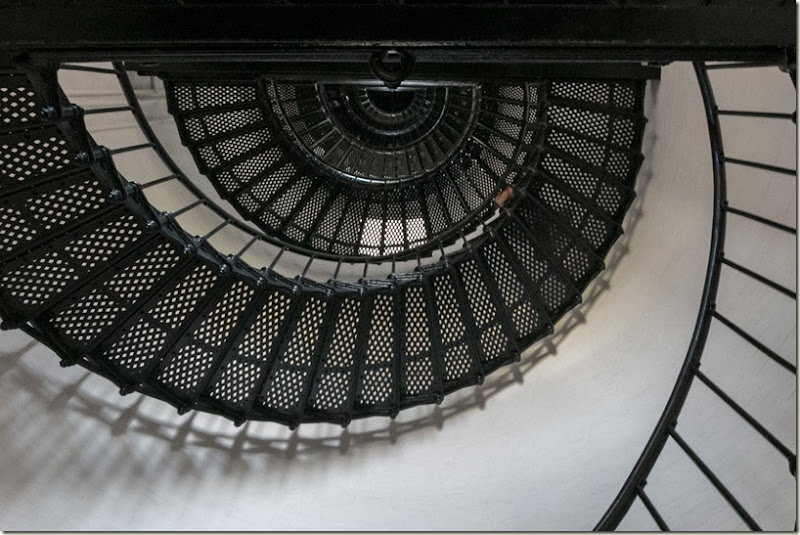 Another photosphere. Again, it is somewhat disjointed because I tried to hold the phone out over the void.

We first played our game of “I’ll take your picture and you take mine”. 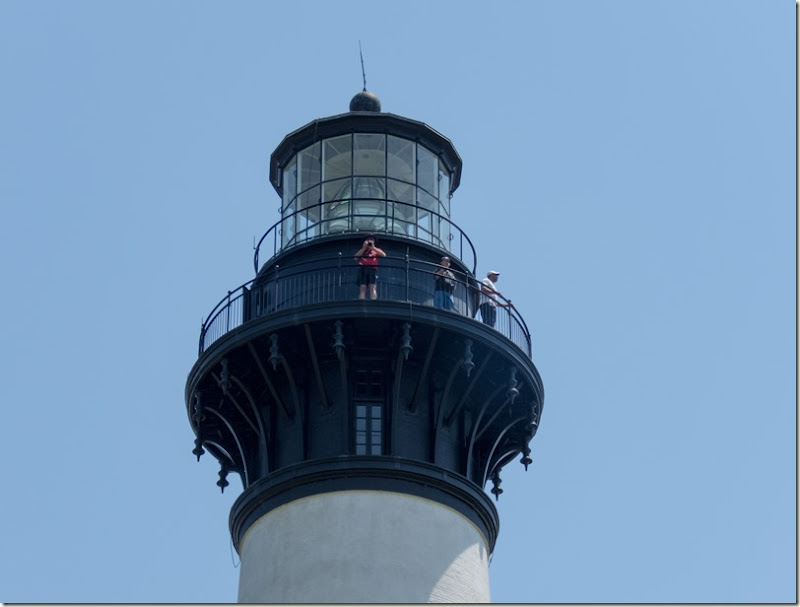 She is on the front porch. 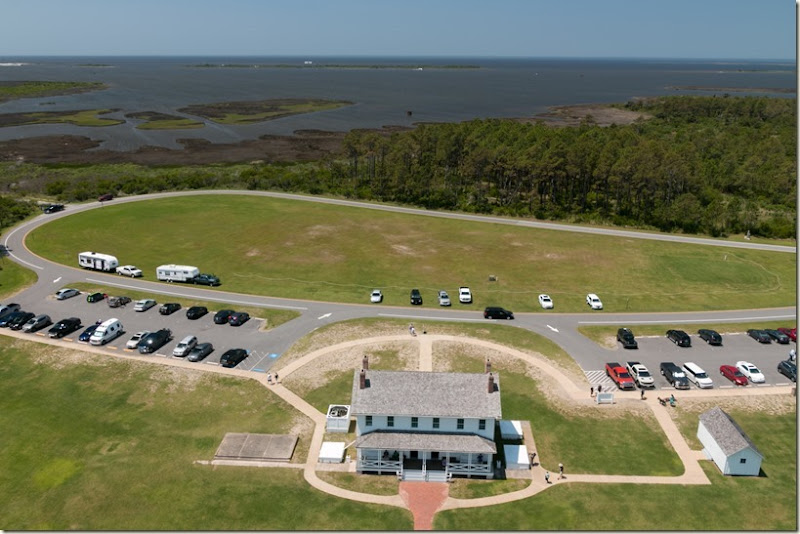 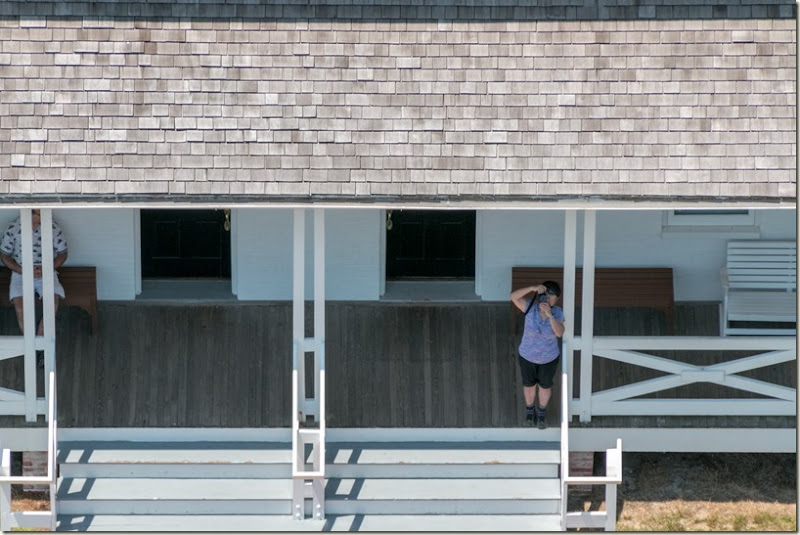 I tried a few panoramas where I aimed my camera straight down, then took shots incrementally as I bought it up to level and stitched them all together. 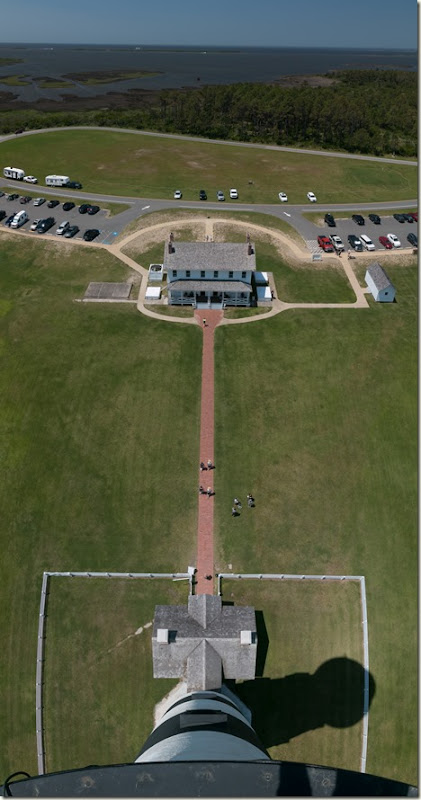 And another one out to the boardwalk into the nearby wetland.

And of course some photospheres. I just love these things for that “You are there” feeling.

Standing in one spot. This one really messed up because I tried to hold the camera over the railing and it was hard to keep one position.

And walking around the railing.

This lighthouse still has its first order Fresnel lens. It is a set of prisms, where the whole structure is 6 feet across and about 9 feet tall. 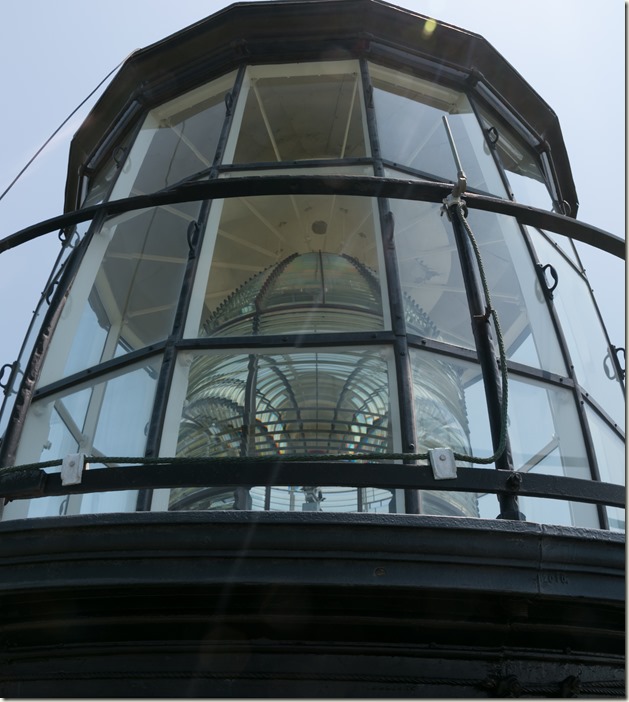 I stayed up so long that I was the only one there. I was talking to the ranger on duty and I guess she figured out that I was an enthusiast because she let me go up and look at the lens, which they normally do not do. It is behind a locked door.

The things is so massive that it called for another photosphere to get it all in.  Again it is very disjointed as I was only allowed to go up a few steps and had very little room to twist around to get the 360 degree view.

The light uses two 1000 watt halogen bulbs. A very cool place to see and I thanked the ranger profusely.

As we came out the door, a kid and his dad had come up. The kid asked if they could go up but the ranger said no.

I finally dragged myself away and headed down. Jennie wondered what had happened to me.

We then did the short walk out on that boardwalk, to the viewing platform at the end. 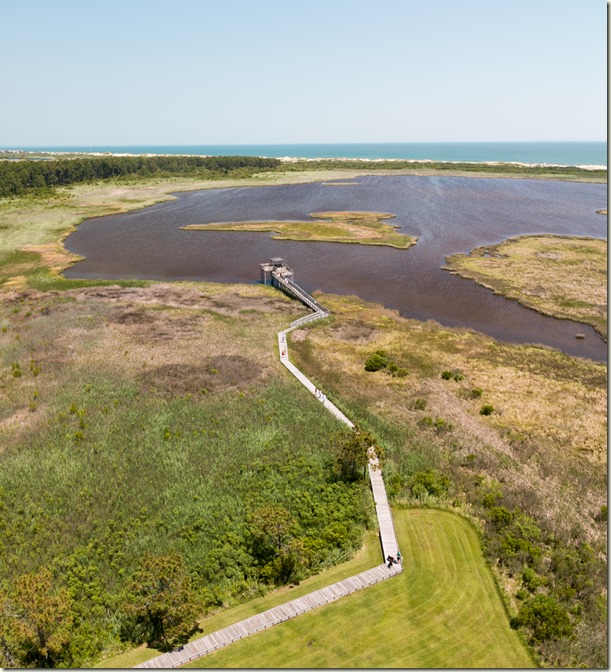 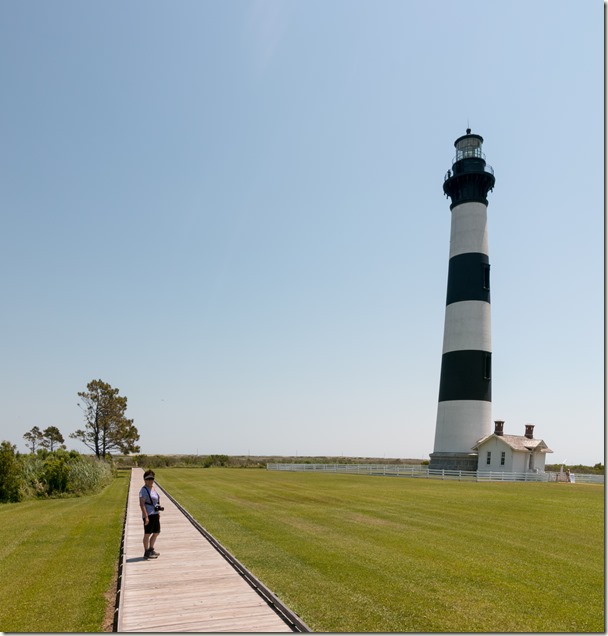 A sign said that you should stay on the boardwalk as there were venomous snakes in the grass. We saw a snake but are not sure what kind it was. 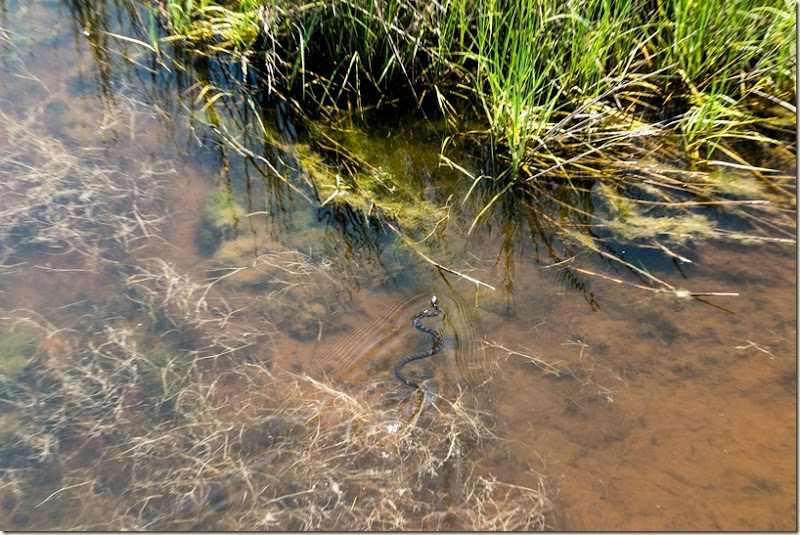 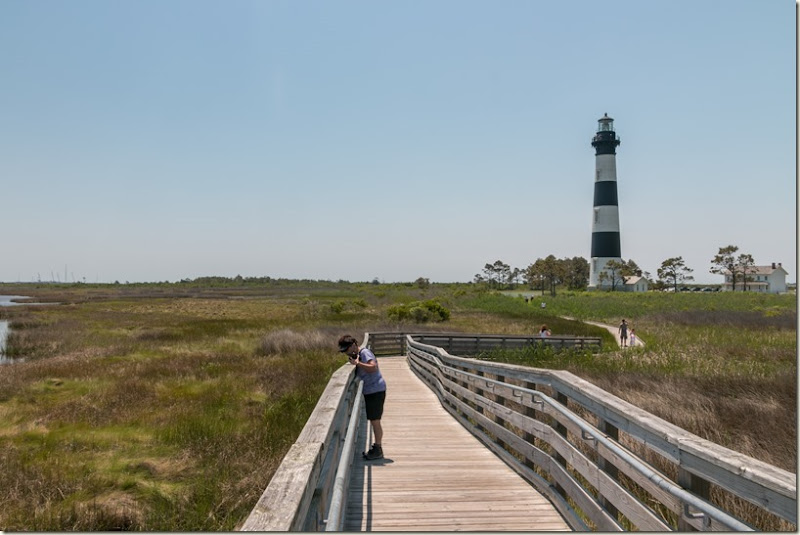 Another deadly creature. Not a great picture though. 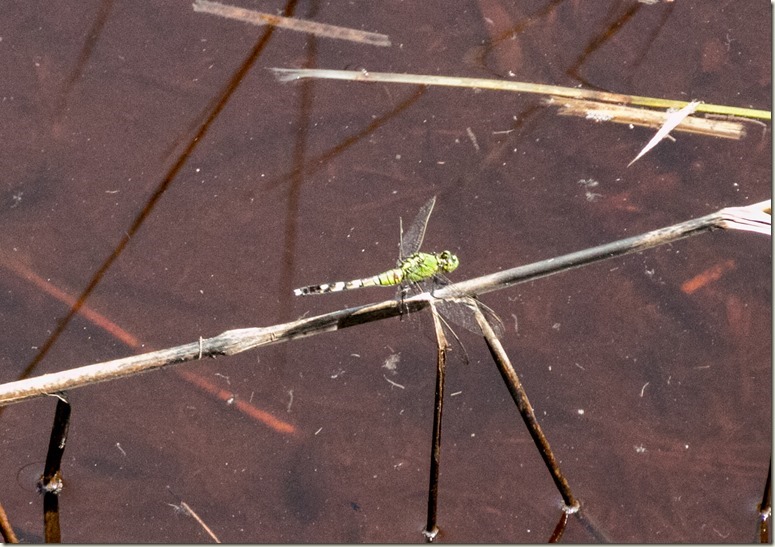 We saw these two egrets flying around and I think they got too close to the red wing blackbird’s nest because it started attacking them until the two flew away. 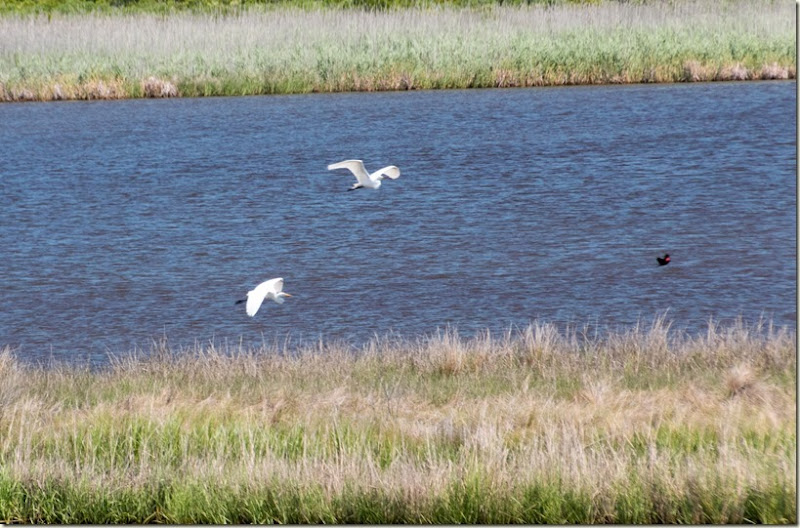 This next picture is just to remind me but we kept seeing some small fish leap several inches out of the water. I guess they were catching insects. 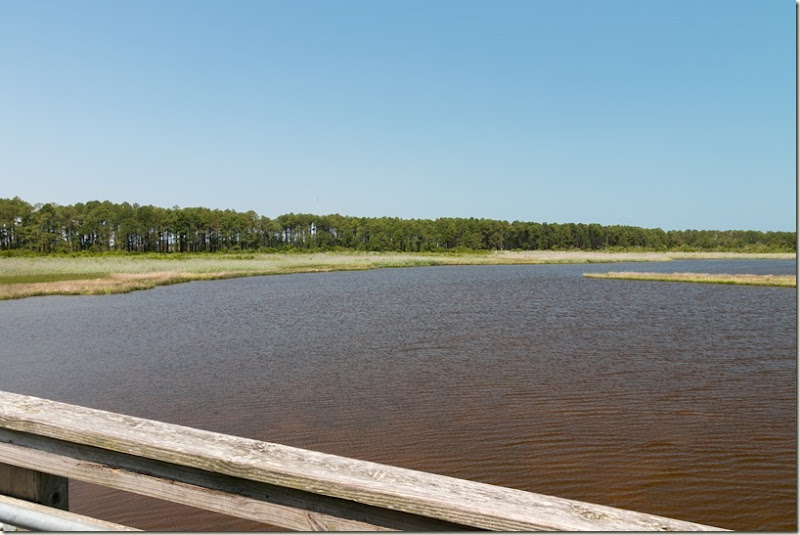 I was never fast enough. The best I got was this out of focus little splash. 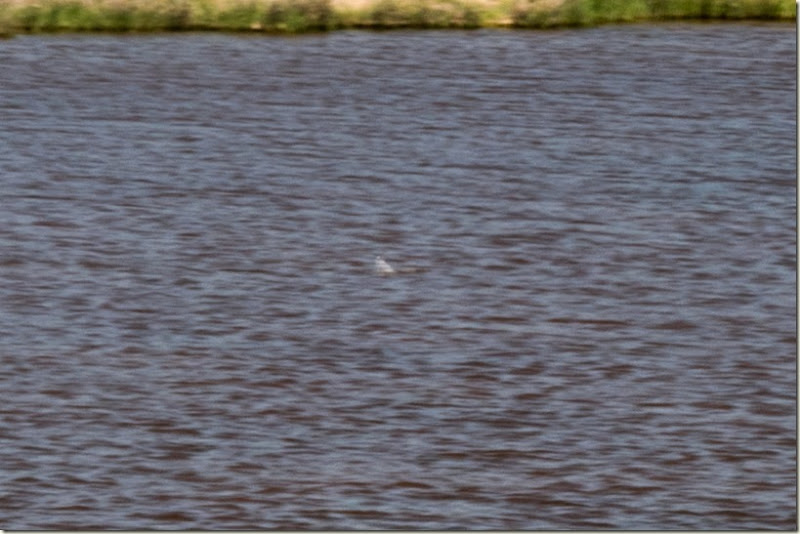 It was a very hot day and it was nice sitting in the shade of the platform. We wished we had brought our lunch out. We toyed with going to get it but decided to have it at the next stop.

Moving on. Never hurts to have another lighthouse shot. 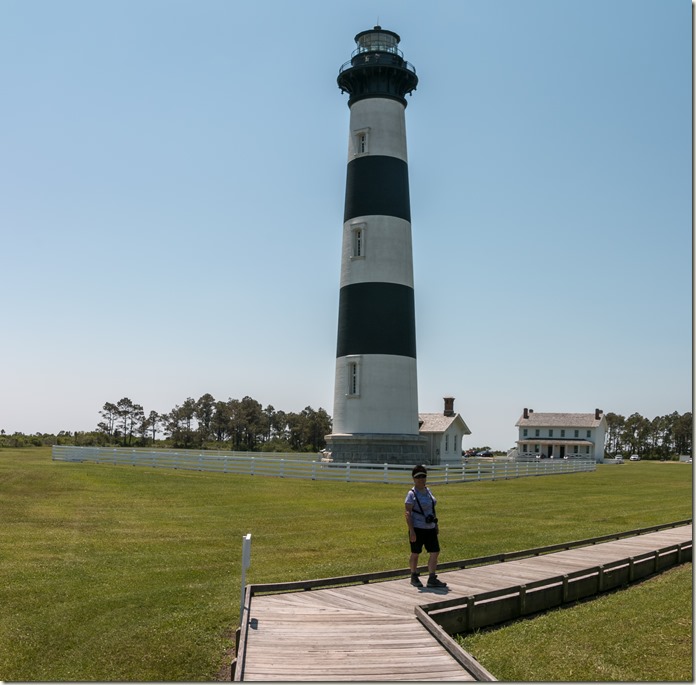 The Pea Island Wildlife Refuge Is a small protected area that is a haven for bird watchers. From the Google satellite view it looks man made. 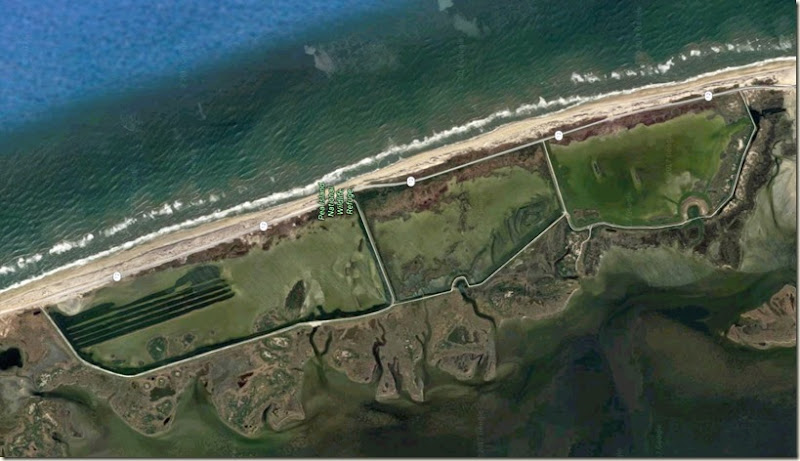 We did another short walk out to a viewing platform. 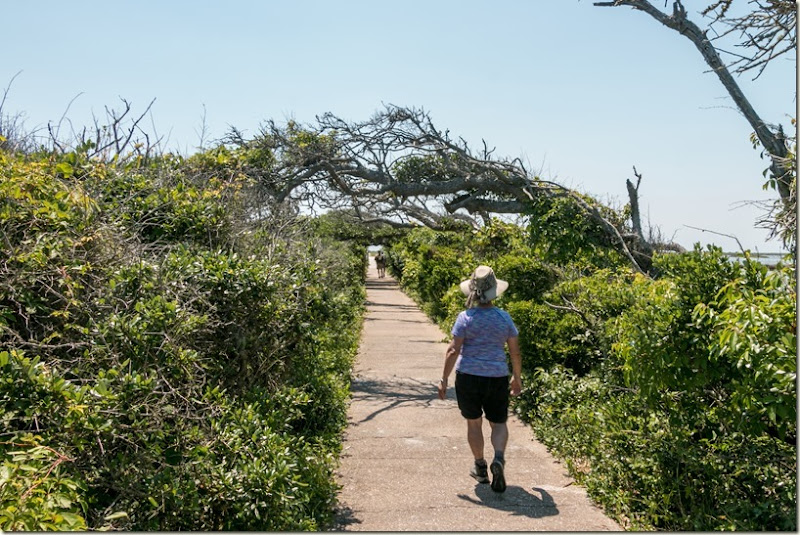 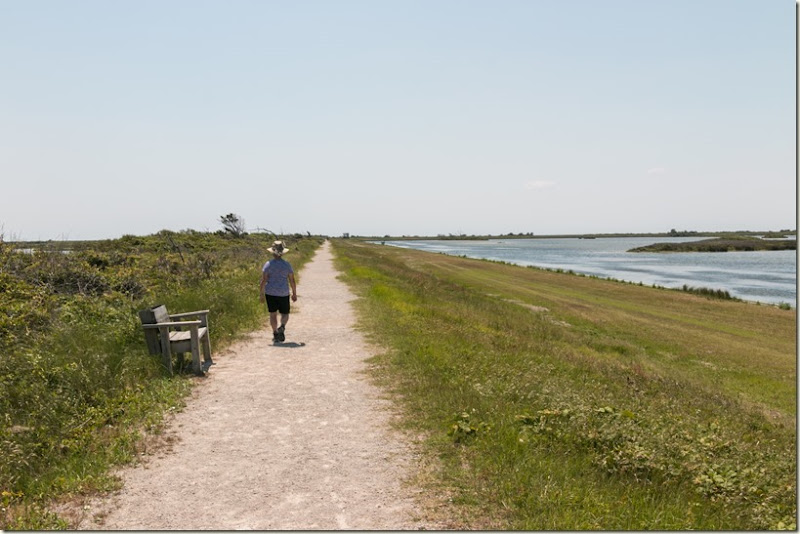 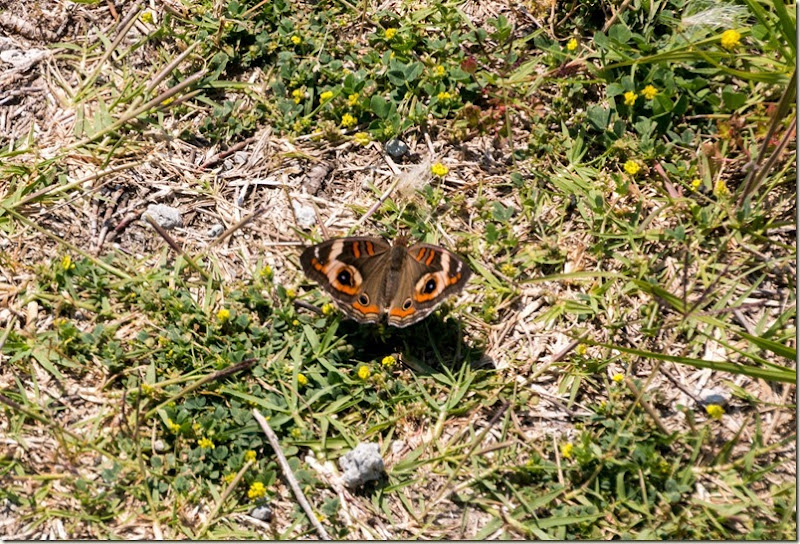 There were lots of these very fluffy plants that I think are a kind of thistle. 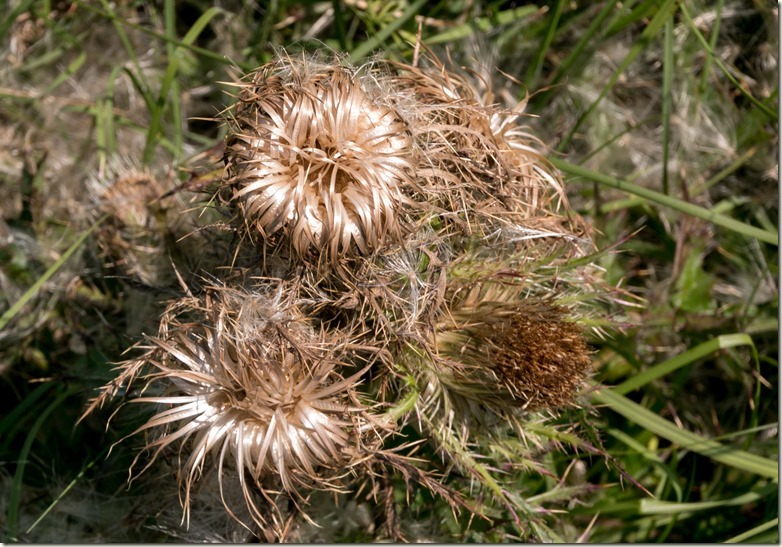 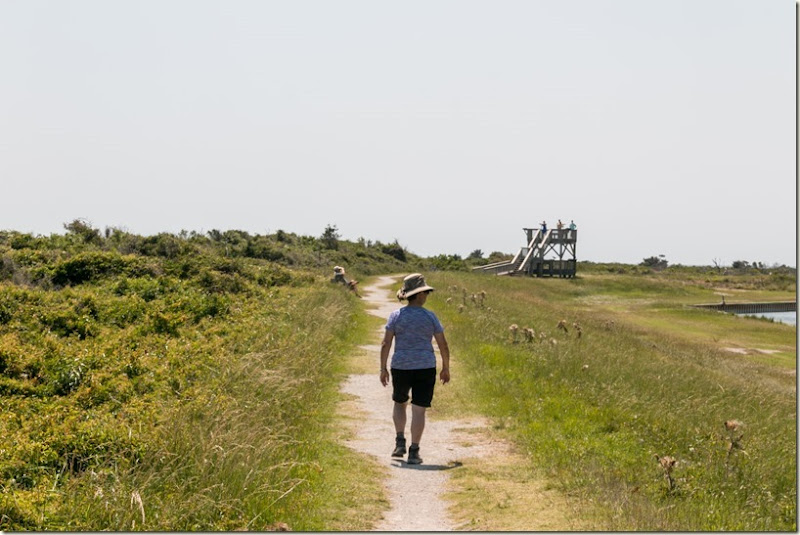 As far as birds go we heard a lot of songbirds. We saw some Egrets and Canada Geese. This one blackbird had a very vibrant red patch. 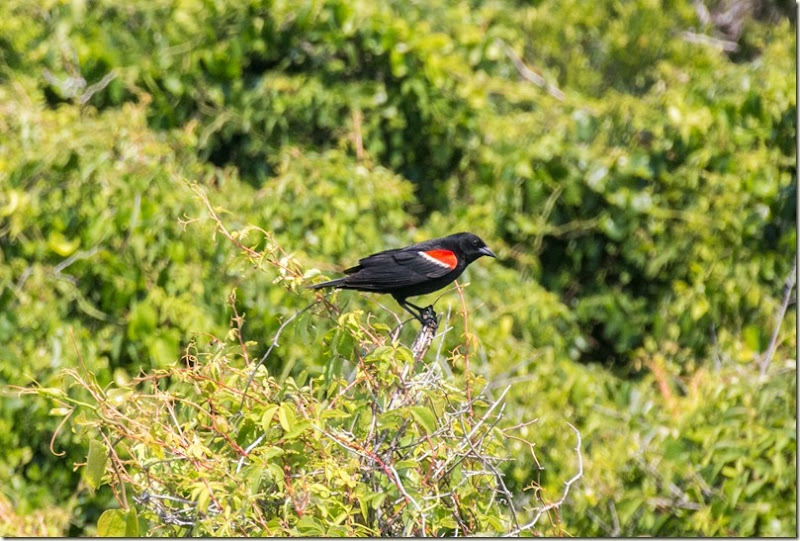 Lots of straight lines and raise dikes between the ponds. 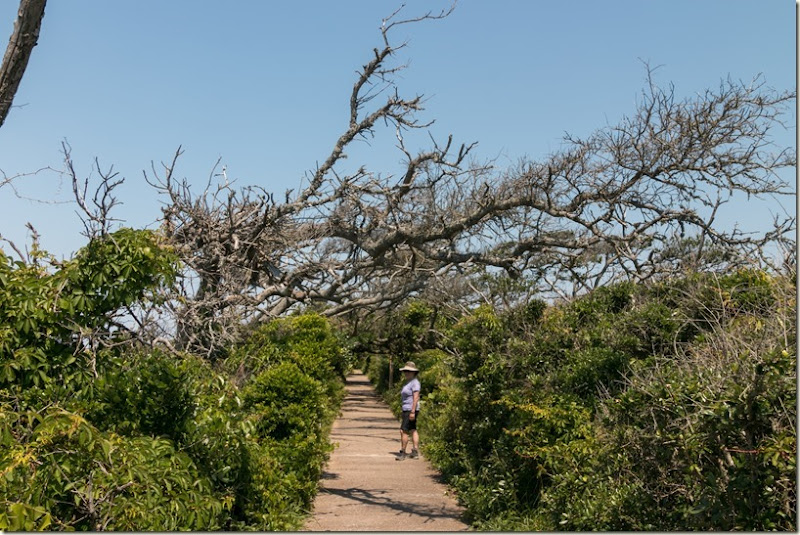 We hopped over the highway and Jennie spent some more time looking for shells while I walked in the surf. Another very empty beach. 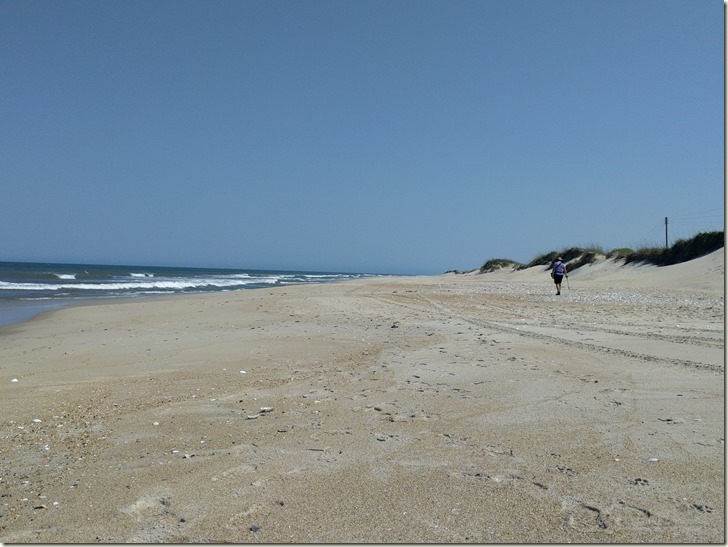 The water was a bit colder here. Normally I only go in deep enough such that the waves just reach my knees. One wave surprised me and my chest got quite wet. Thankfully everything was in the backpack and I was facing forward.

Another nice walk and great day.