May 2 – To the Crystal Coast

We moved another 2 hours up the coast to plant the RV in the Cedar Point Campground of the Croatan National Forest.

After we had lunch we drove to the town of Beaufort to check out the Cape Lookout National Seashore Visitors Center, as we are taking a boat out to Cape Lookout tomorrow. One of my guide books said that the North Carolina Maritime Museum in Beaufort was also worth a look. One the way back we stopped at a restaurant recommended by the guide book and then drove an alternate way home via the Bogue Banks.

The campground seems really nice. Paved sites, 50 amp power to run the A/C and an open sky for the satellite TV. No Wifi but we can use our own. 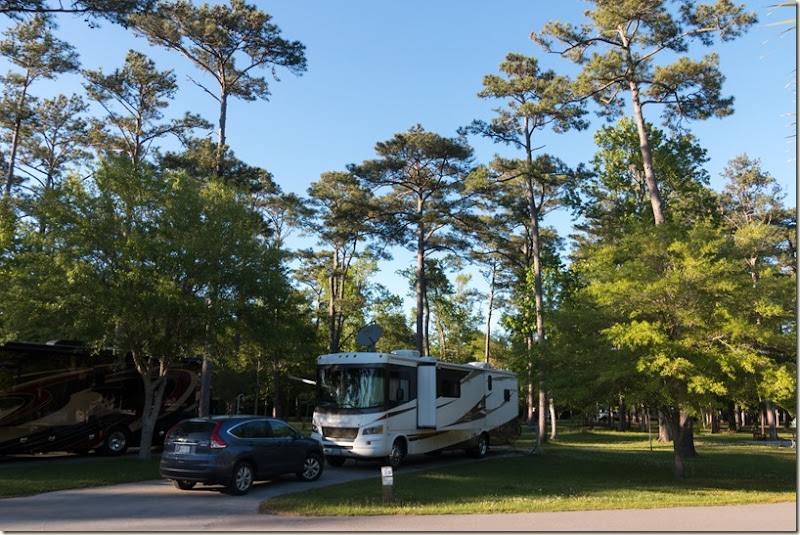 The lady at the visitors center couldn’t tell me much more than I already knew so we didn’t stay there very long.

When we got to the maritime museum, we first watched a film about Blackbeard the pirate. He met his end in the area and they found the remains of his flagship “The Queen Anne’s Revenge” just off the coast of Beaufort after it ran aground on a sandbar.

They said that this was a guess at the what the ship looked like. It must have been a pretty wild guess because there were no records and if you look at the picture in the background the splotches of red are the only parts of the hull to survive. 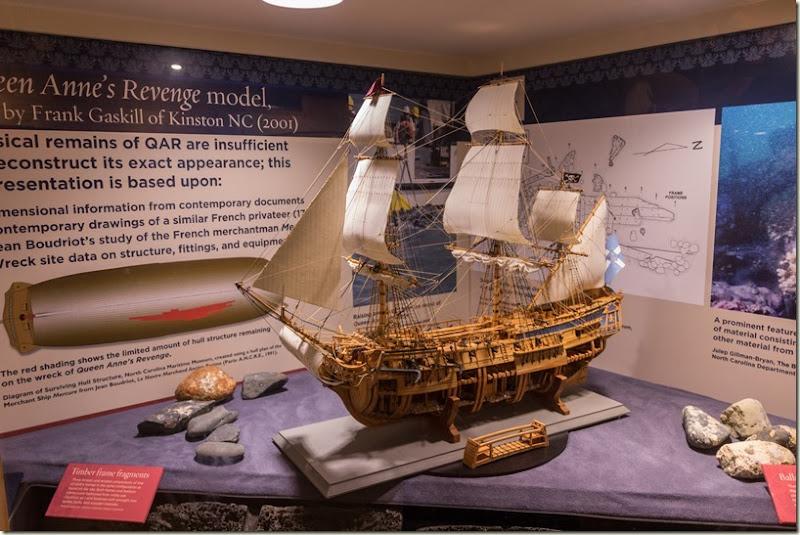 A replica of the dive site. 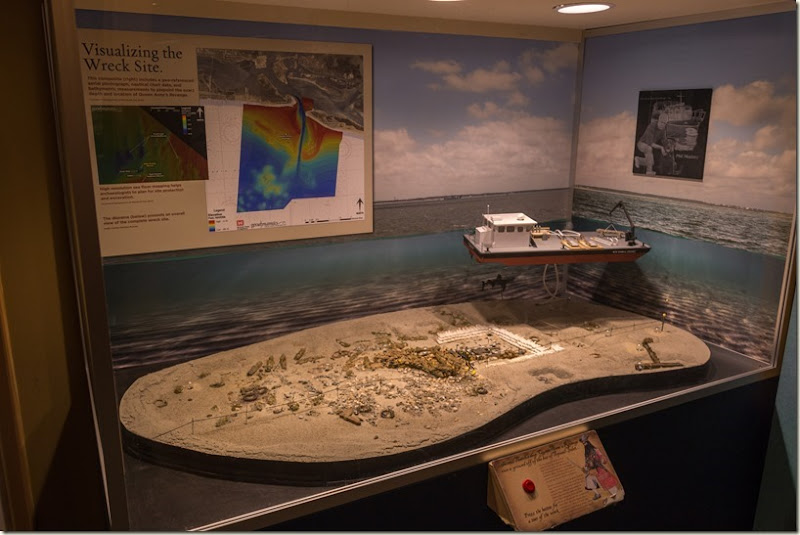 These are two of the cannons that were recovered, It took two years of restoration work on each one to get them into this shape. 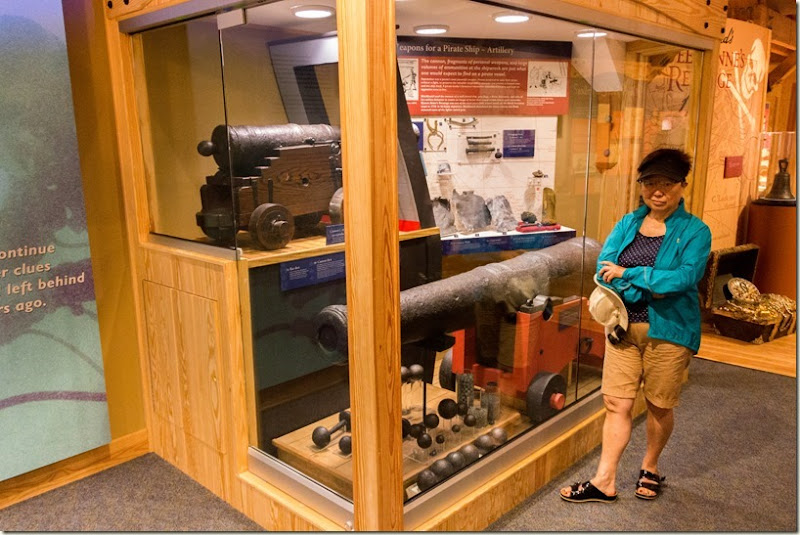 The rest of the museum had exhibits about the sailing and fishing in the area. 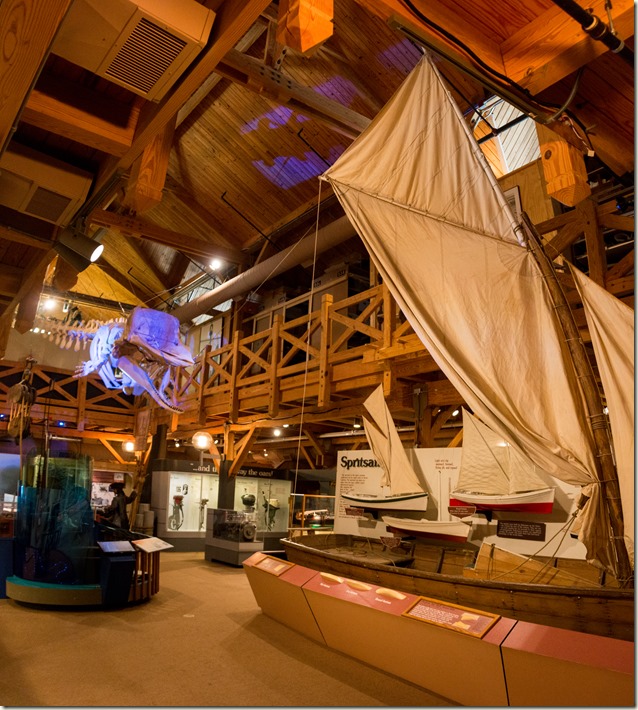 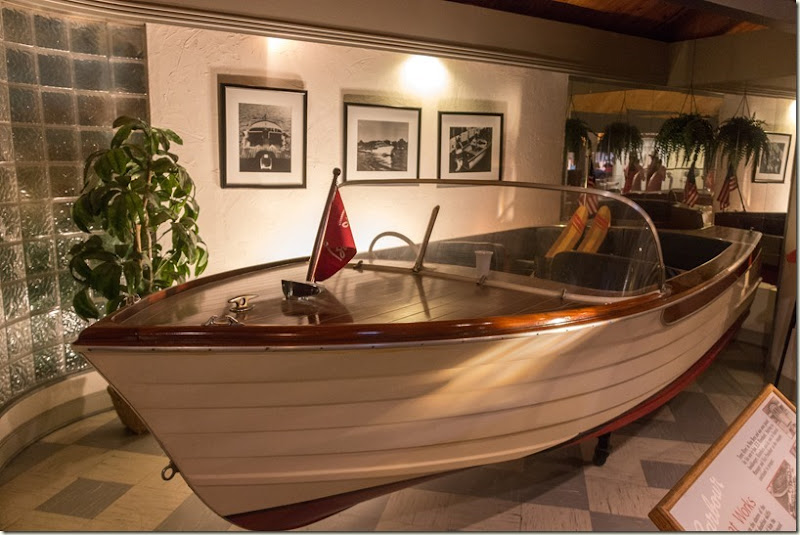 An exhibit on the lifesaving crews showed a cannon they used to get a line out to a floundering vessel. I thought the box used to make sure the line came out easy was interesting. I guess they did some whaling. 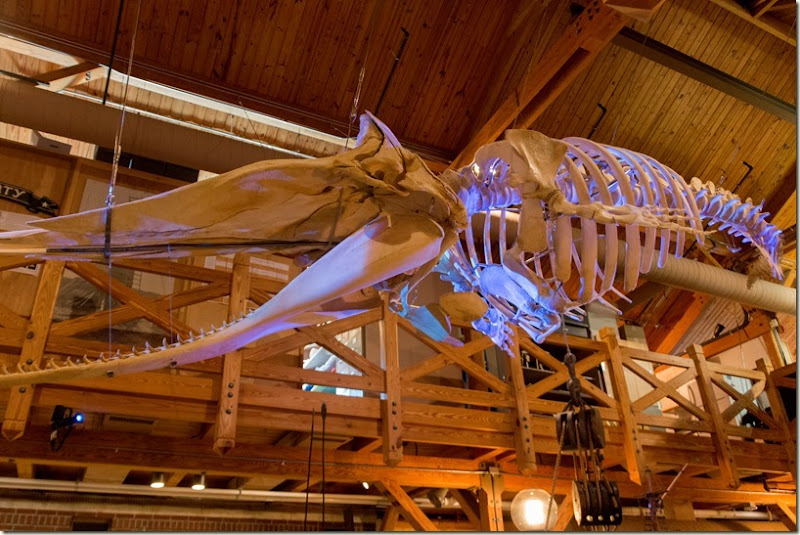 I took pictures of their shell collection so that Jennie could have some reference material. This was just one of many. 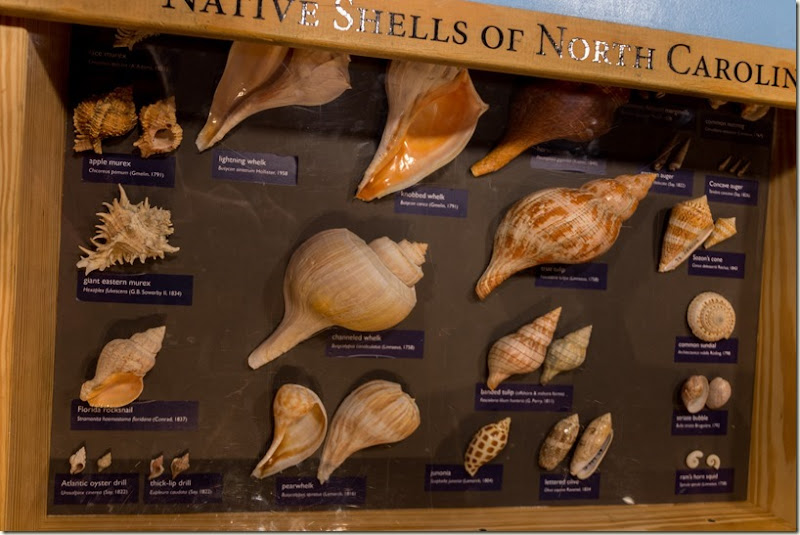 After leaving we walked down the beachfront road and Jennie did some shopping. 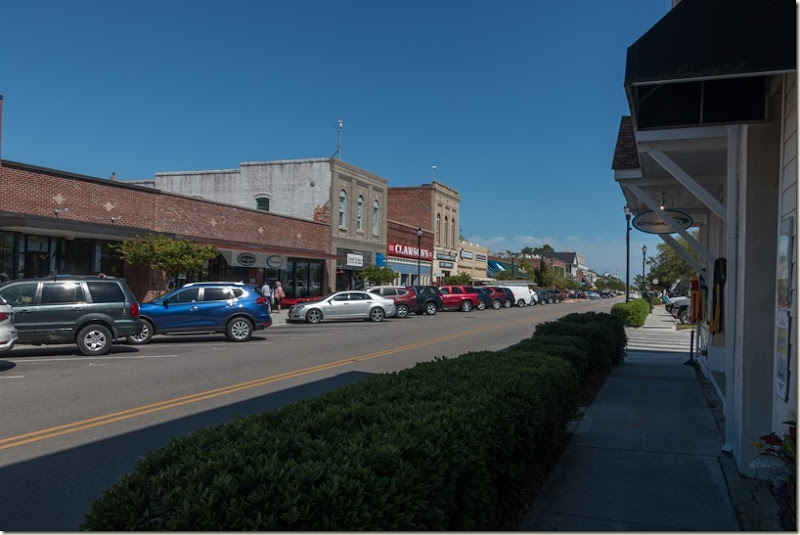 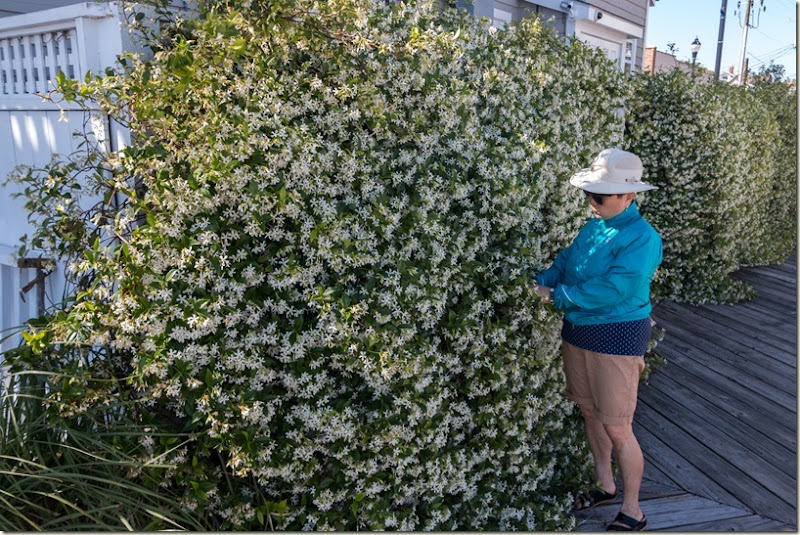 And then walked back via the short waterfront boardwalk. 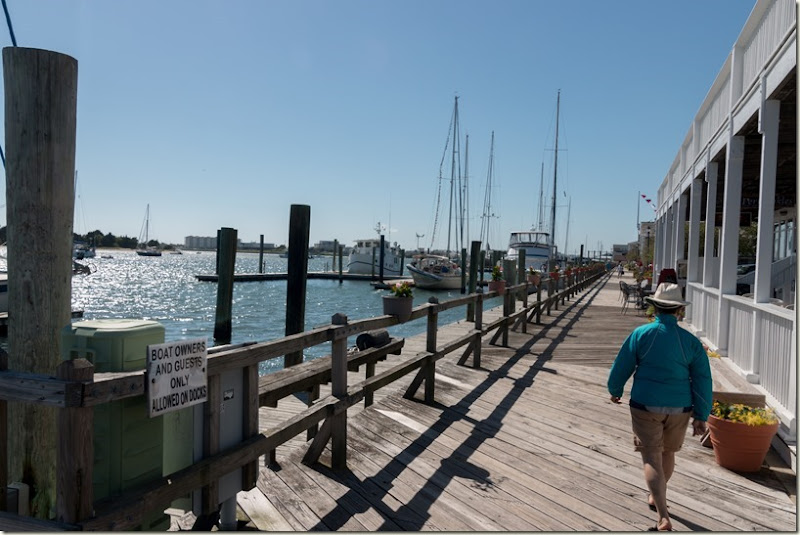 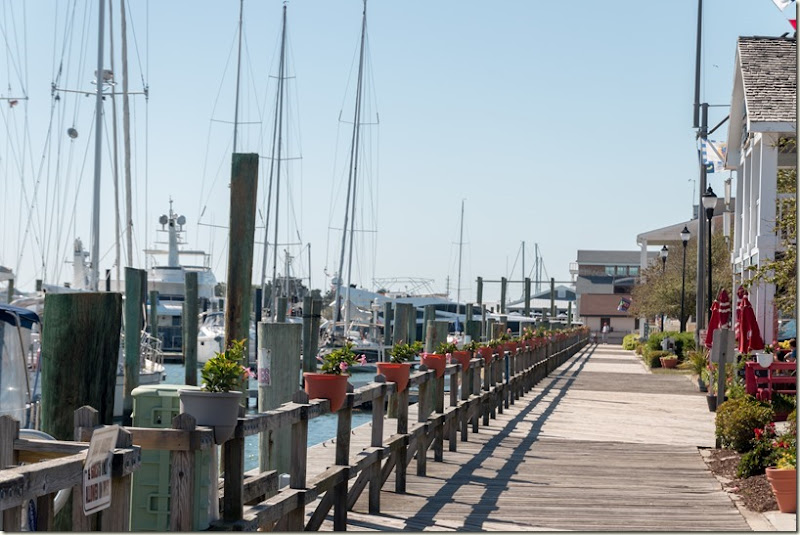 Lots of giant boats. This massive sailboat made other ones that I would already consider large, seem tiny. 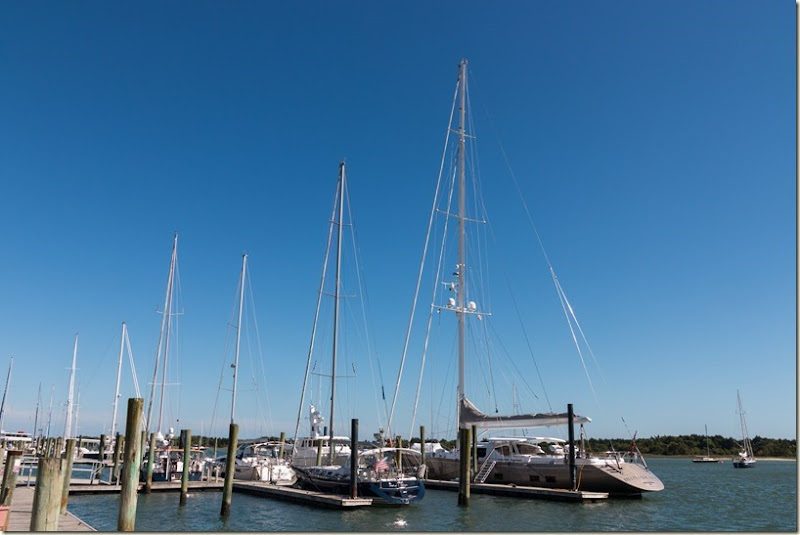 This one looked like someone had taken the front and the back and squashed them together, 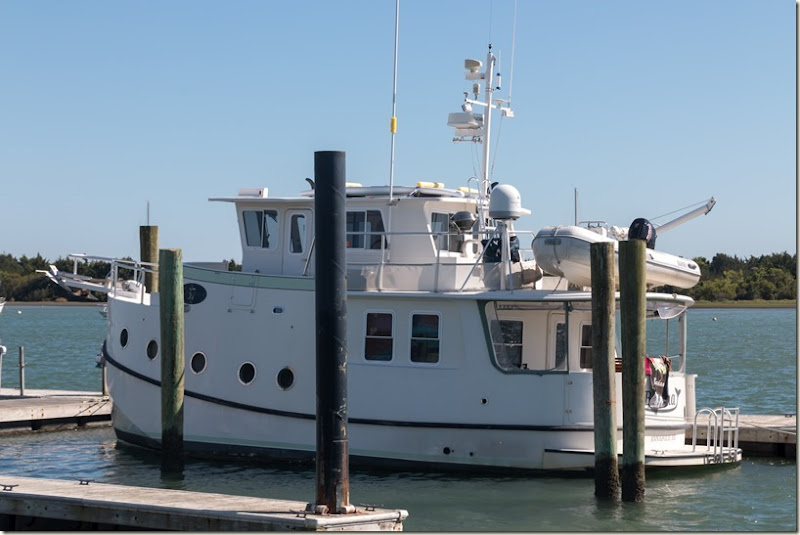 We stopped for an early dinner at the Sanitary Fish Market and Restaurant in Moorehead City. The name comes from long ago when the company wanted to make sure that everyone knew of the cleanliness of the place.

The restaurant is huge. We talked to the waitress and she said they can seat 600 people and have huge lineups in the summer. There was lots of resting spots for waiting outside the door. 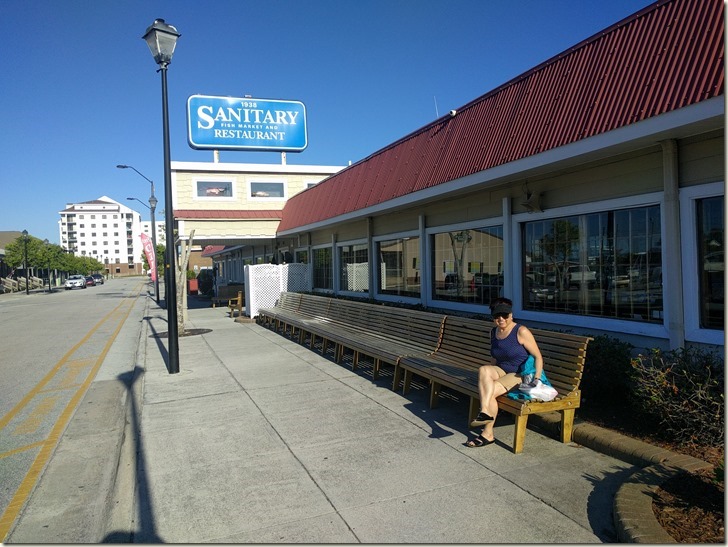 It was not so busy today. This is one of 3 indoor sections plus a large outdoor deck. 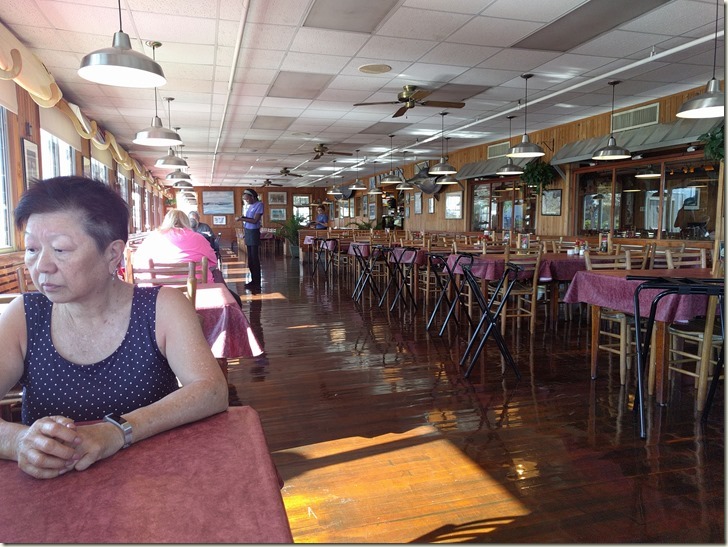 The food was good but we have got to find somewhere that everything isn’t deep fried. We did finally learn what hush puppies are, deep fried corn bread.

The drive back was not very scenic. Both side of the the banks seem to be covered in very dense wind blown trees. I think I saw the ocean once.

It is still very windy on the ocean. I am worried that our boat trip tomorrow to Cape Lookout might be cancelled.