May 30– Fallingwater and Ohiopyle Waterfalls

Today we did a tour of Frank Lloyd Wright’s masterpiece, the home called Fallingwater.

Unfortunately we weren’t allowed to take many pictures. To get inside the home you must take a tour. The regular tour is 1 hour, costs $30 and does not allow pictures during the tour. Twice a day, first thing in the morning, there are tours where you are allowed photography but those tours were booked solid for weeks to come. I should have booked the tour a long time ago but I wanted to wait and see if we had a bad weather day. My mistake.

I booked our regular tour a few days ago but because today was not busy we could have walked in. Forget about that last weekend. Even today by the time we left around 2 pm they were up to tour #35. Our tour had 14 people. So for mid week that is a lot of people. 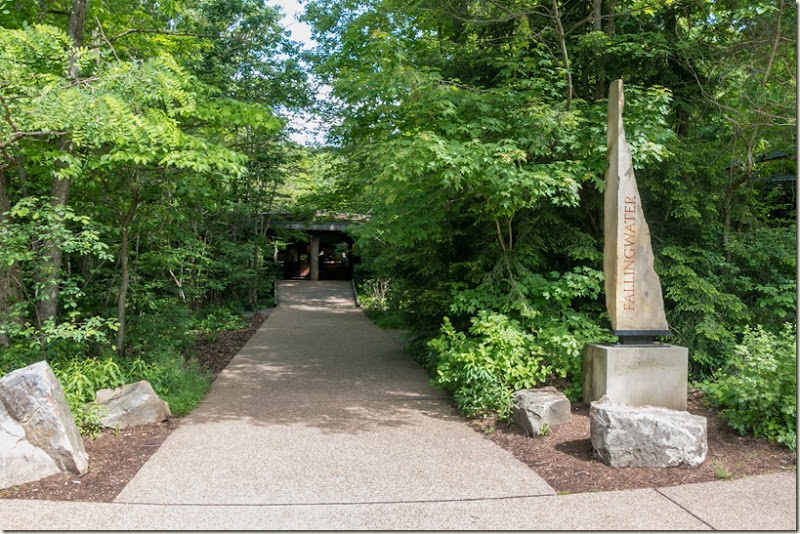 Even the reception area is beautiful. 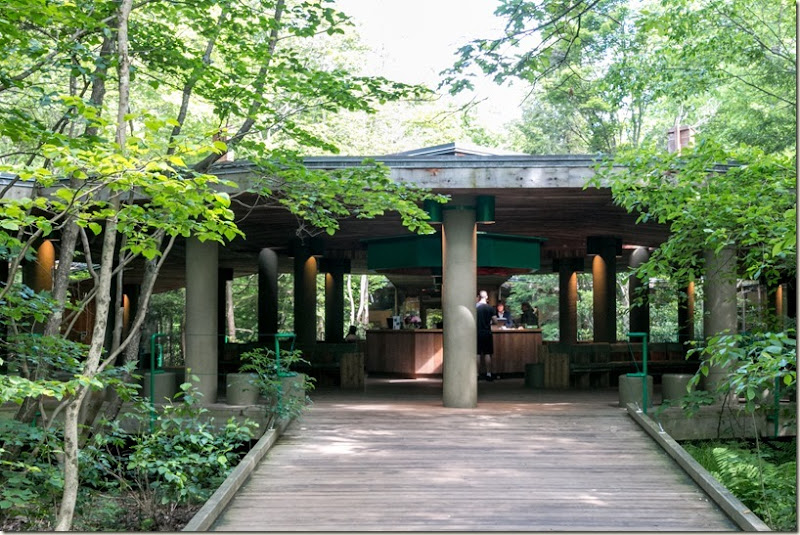 Everyone walks down to get pictures at the iconic viewpoint. 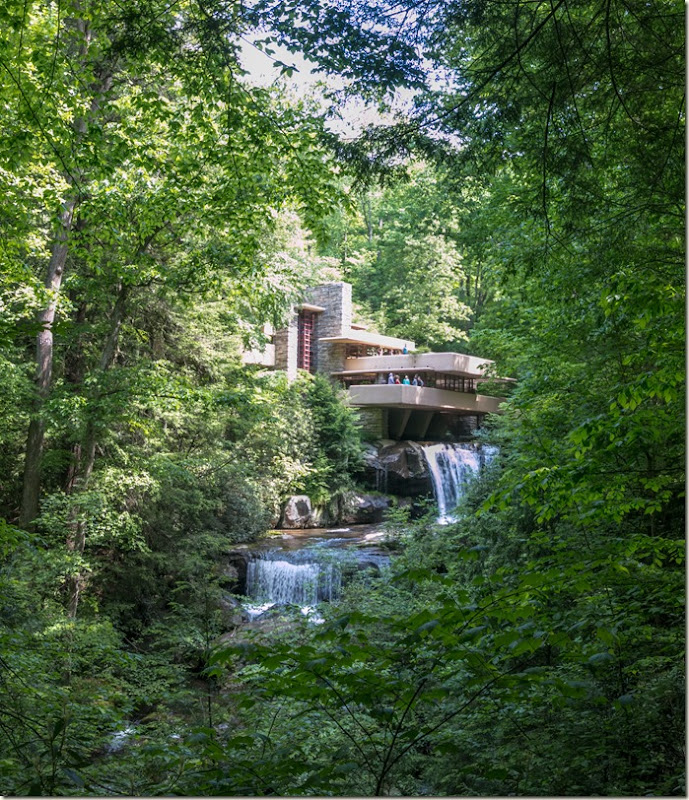 The house was commissioned by the Kaufmann family of Pittsburgh as there summer home. They made their money from their large department store. It took two years to build starting in the late 1930’s. Back then a 3 bedroom house cost around $5000. The initial estimate for this house was around $30,000. The final cost was $150,000. Who knows how many millions that would be in today’s dollars. 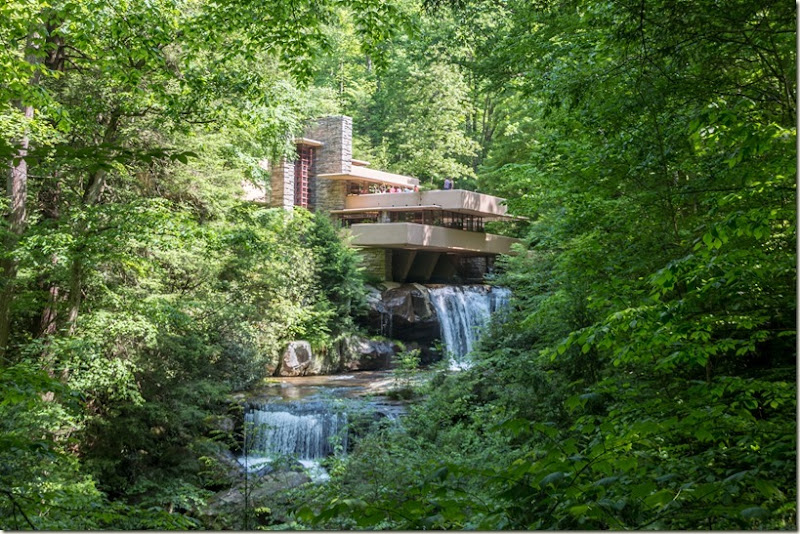 The house is cantilevered into the rocky hillside, out over the stream and waterfall.

Wright designed the house down to the last detail. All the furniture is built in and cantilevered from its wall so there are no legs on anything. He even designed the lamp shades on the bed side lamps.

The only pieces that are not by Wright are ones chosen by Mrs. Kaufmann. There are only a single lounge chair and the dining room chairs. Wright even fought about having those. 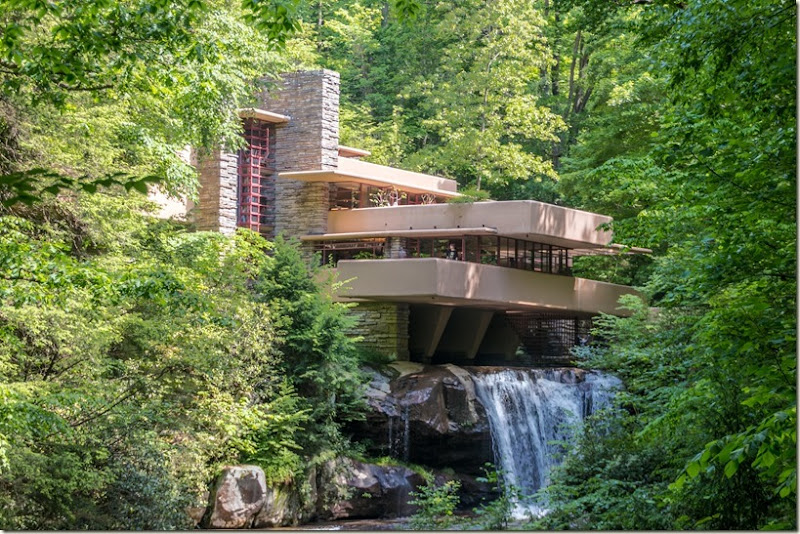 It was a somewhat claustrophobic place. All the rooms were low and rather small. They said he wanted to emphasize the outdoor spaces and all the windows.

This is the view from the other side, where we started the tour. Cameras away. No backpacks, purses, water and cellphones off. No touching anything. 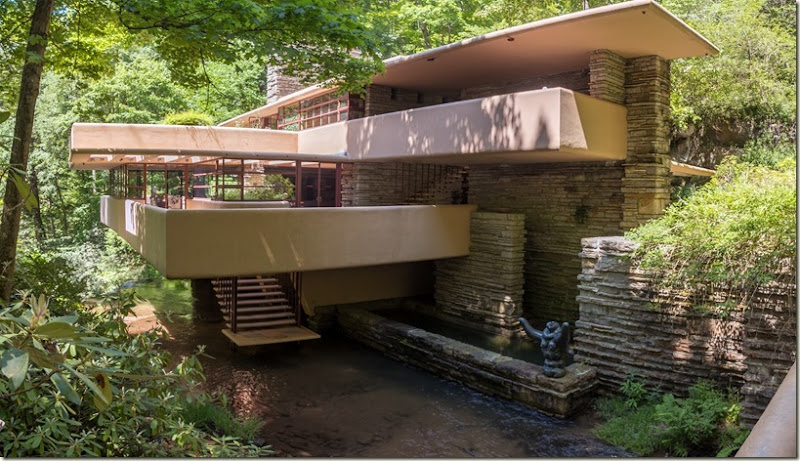 It really is a breathtaking place. So much attention to detail, down to specifying the direction of the grain of the wood in all the cabinets.

The staff quarters and guest house were just up the hill. that was connected by a covered set of stairs.

When the tour was over we exited through what used to be the 4 car garage, but the son turned it into an all purpose gathering room. You can still see where the garage doors used to be. 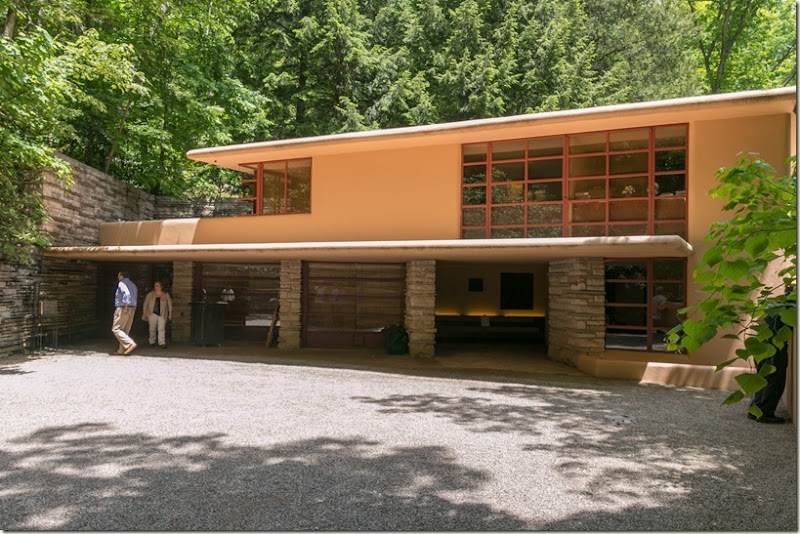 Some of the balconies hung out a long way. Jennie said that she read that the son, who had been an architecture student of Wright’s, hired a structural engineer that disagreed with Wright and his team about the amount of support needed. The son won. 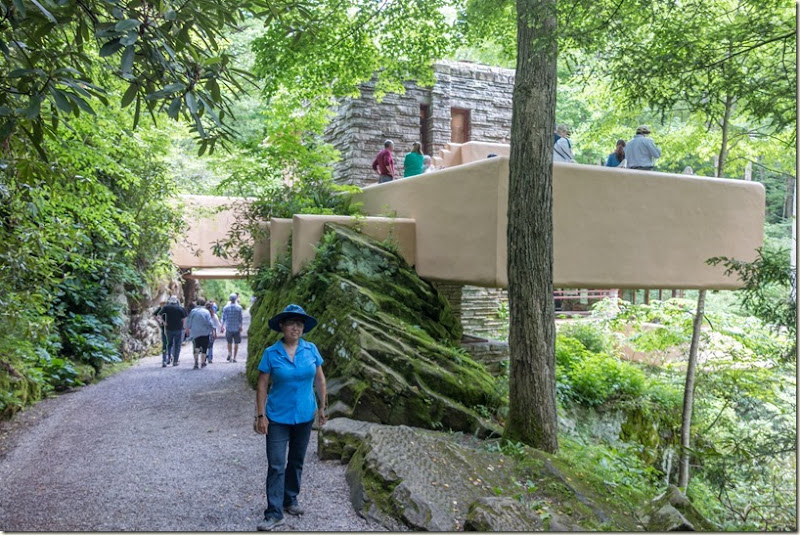 I guess this tree was there before the house, although it looks kind of thin to be over 80 years old. 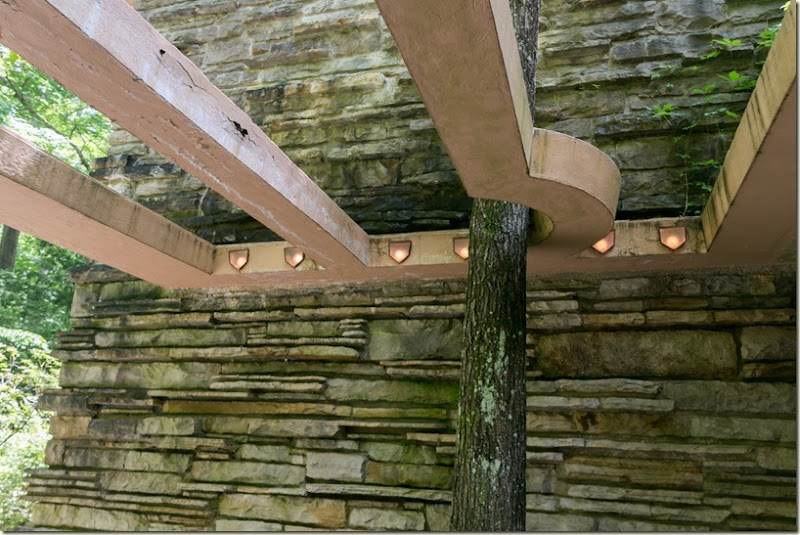 One final view before we went to the car to have lunch. 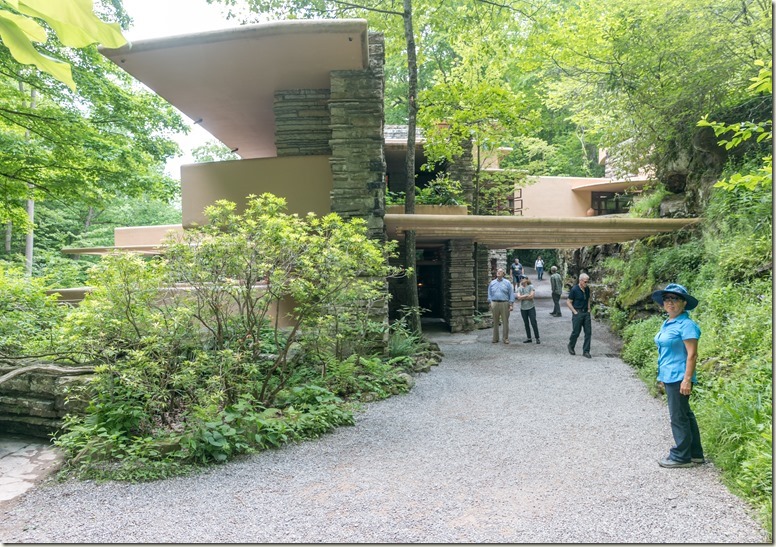 While we were in the car it rained for about 15 minutes and then it was back to bright sunshine. Perfect timing.

I went back to take a photosphere. I had left my phone in the car for the tour.

I think we will have to plan to come back here in another season and book the longer photography tour.

Fallingwater is just north of the state park. We headed back to the park to catch a few roadside waterfalls.

First was Cucumber Falls. The falls are below road level in a gorge. This is from part way down the path. 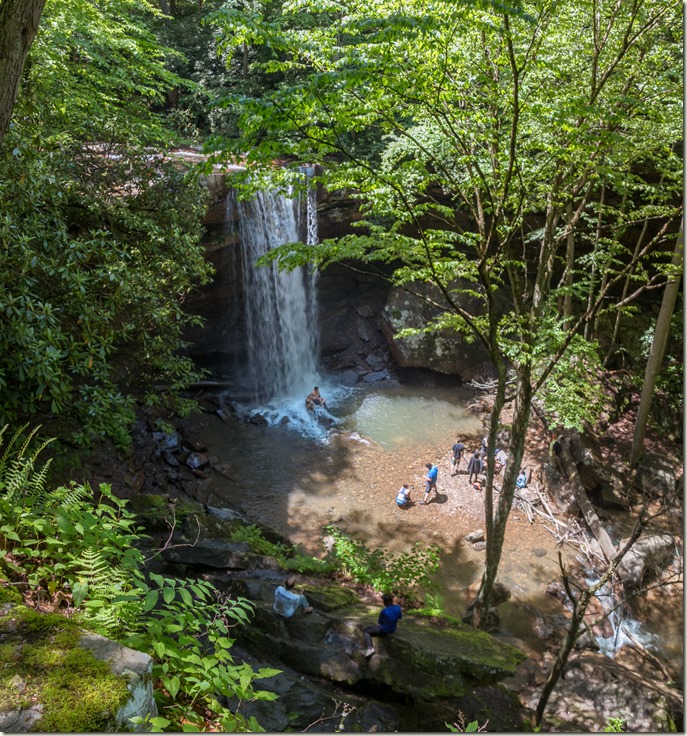 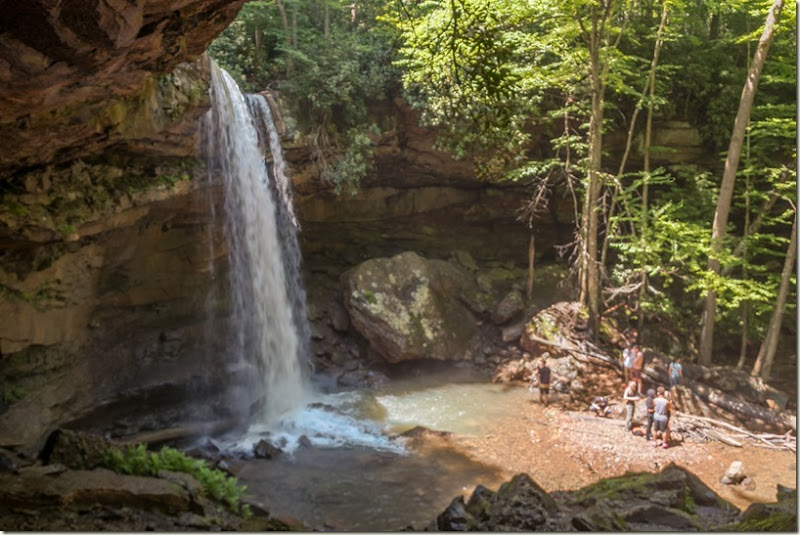 A photosphere from here.

At the bottom of the path, the only way back to the falls was over the very slippery jumble of rocks. We declined. 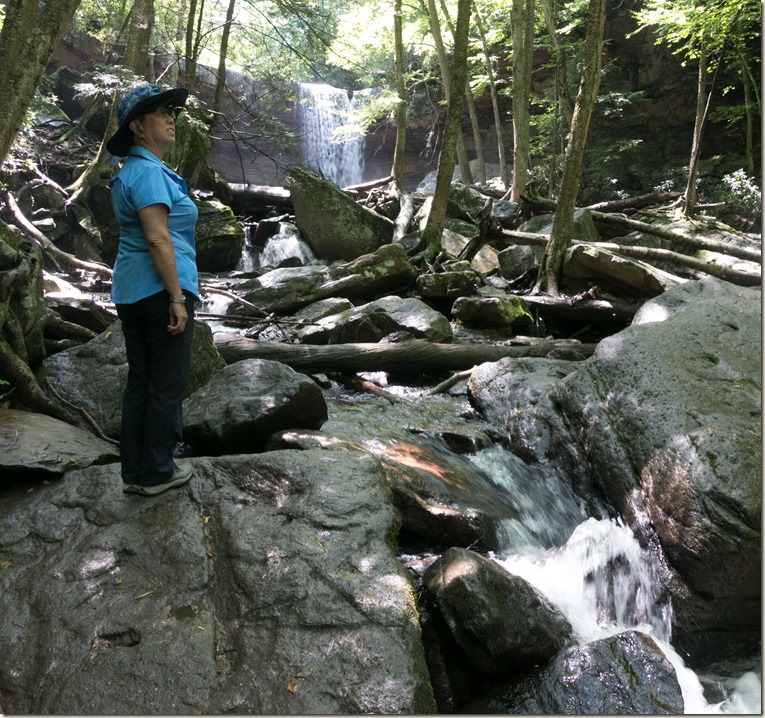 An area just a short distance away was called the Natural Water Slides. 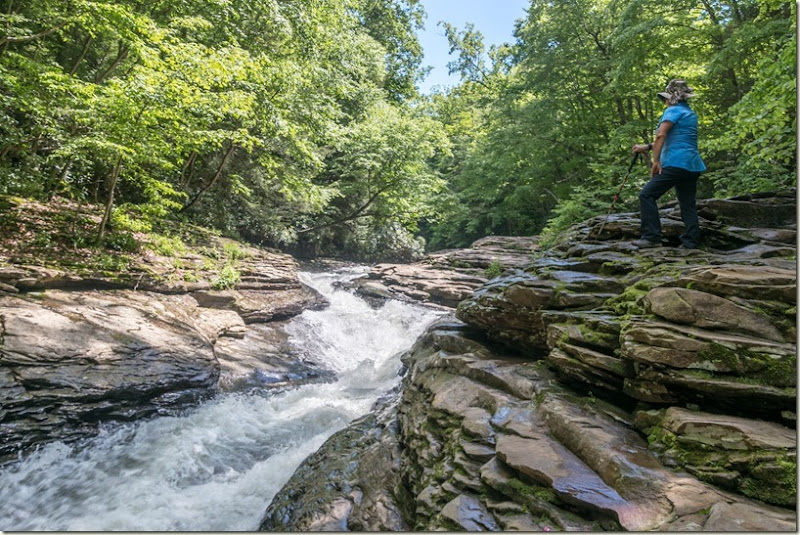 We should have come yesterday, when the park was packed to view some sliders. I certainly would not slide down these ranging chutes but maybe someone would have. 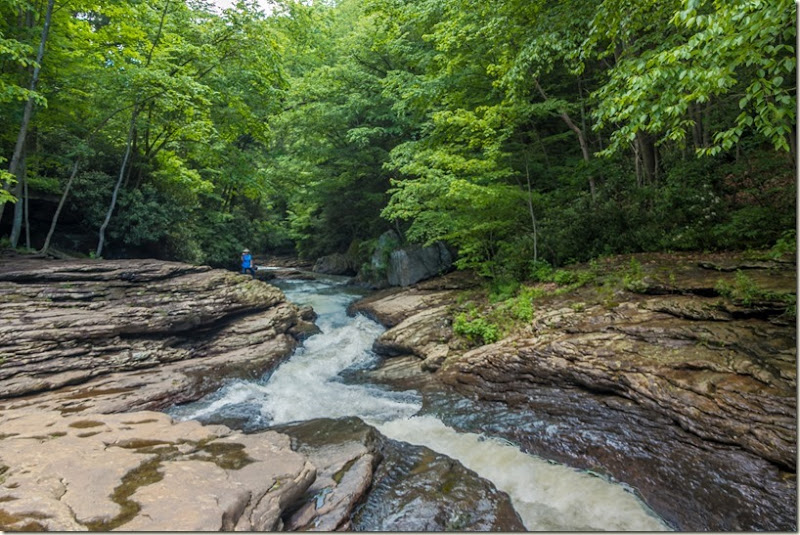 There were lots of small ponds on the rocks covered in what I guess are tadpoles. 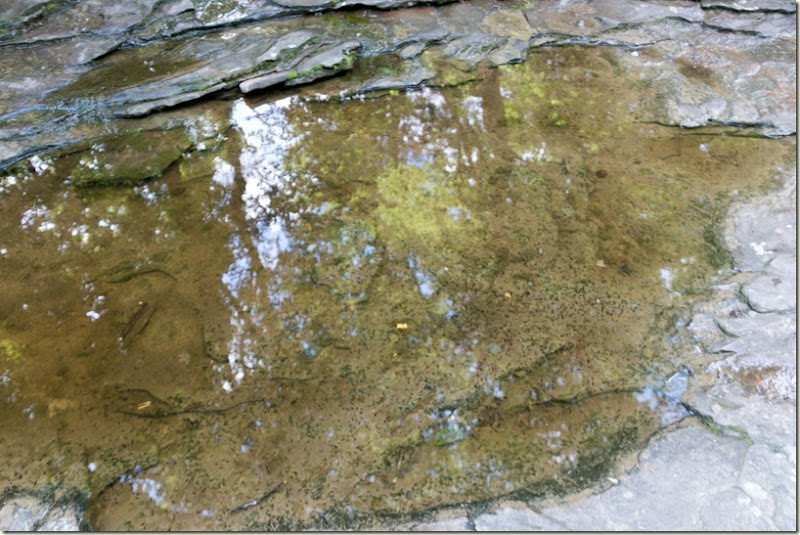 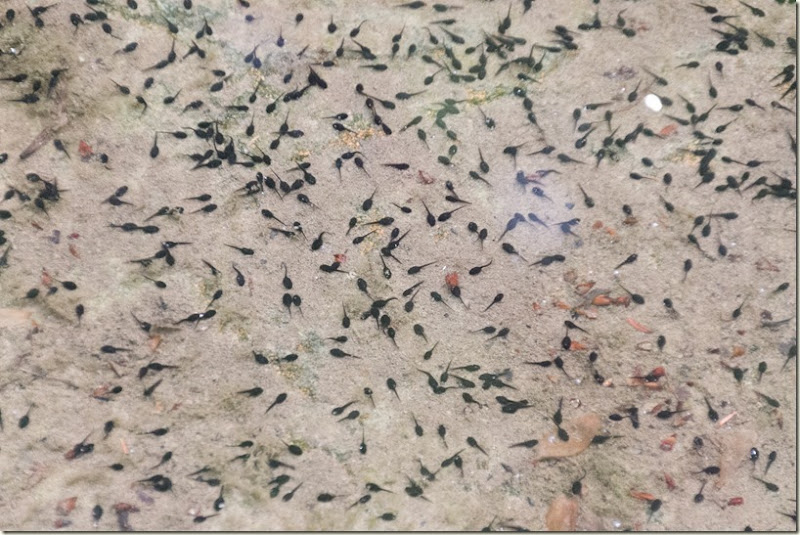 A few more pictures since it a slow picture day. 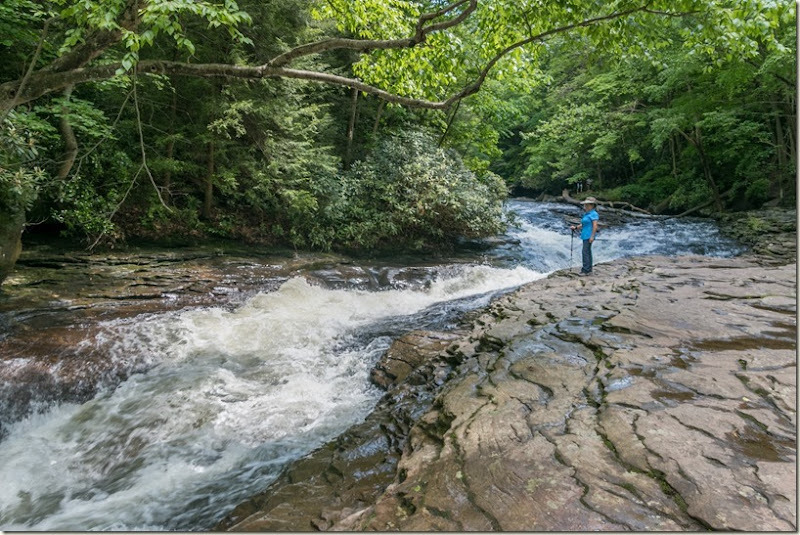 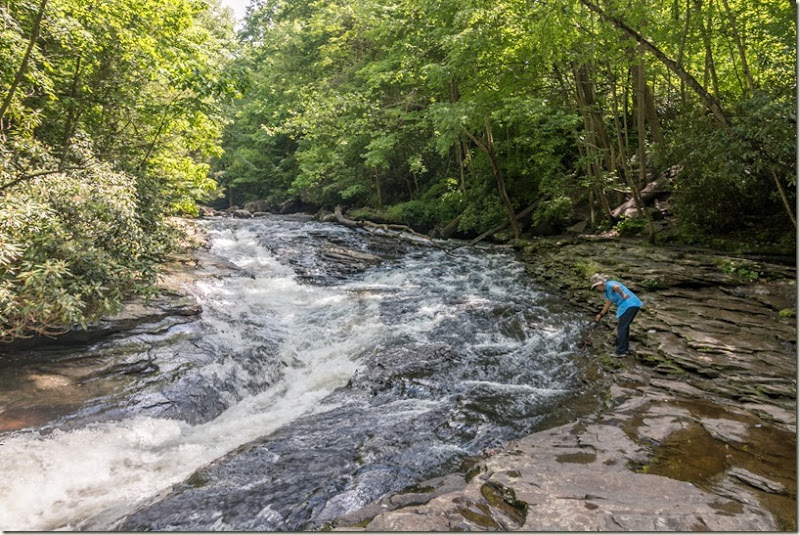