Sorry if this is getting repetitive but I want to be thorough and visit them all. I think this is the last one for this trip. There will be more in Michigan later in the summer. Going here also got us to explore another area of the banks and the grounds around the lighthouse were quite pretty.

We drove almost as far north on the Banks as you can with a normal car, to the town of Corolla. North of there is a protected area with more of the wild horses, that you can only get to with a 4wd or via a tour company. That seems to be a big business here.

It is about a 40 mile drive but takes well over an hour because of the low speed limits. 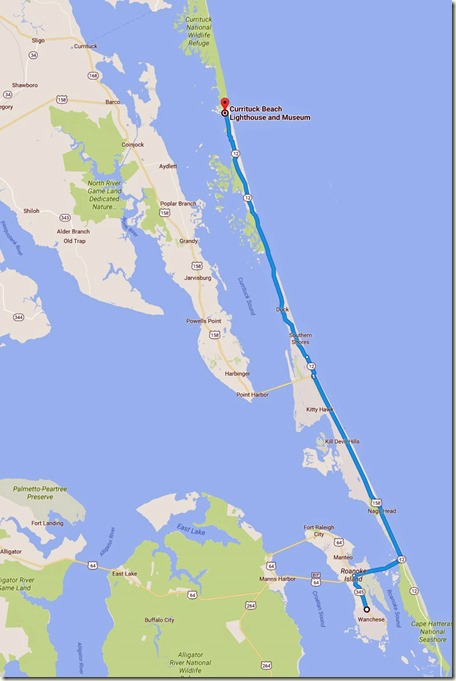 It is also not a particularly interesting drive. Most of the lower section is very commercial while most of the upper section is the lines of rental homes. I don’t think we ever saw the ocean. What natural sections there were looked like this. 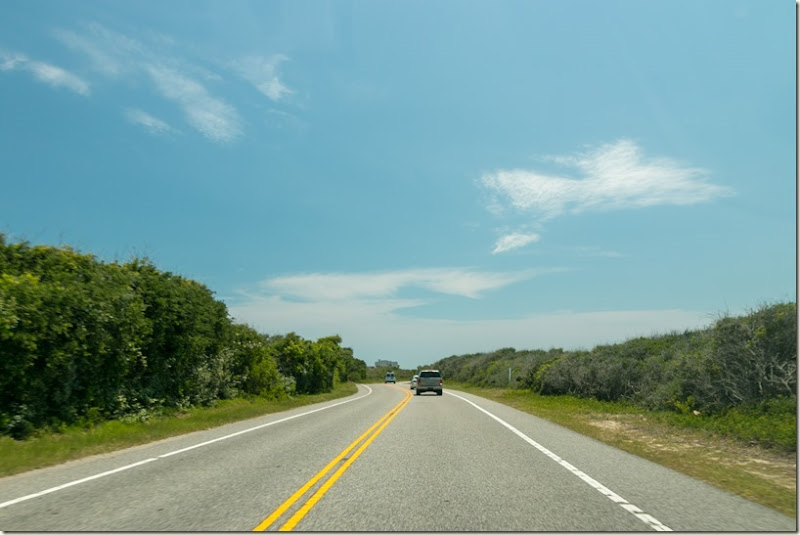 When we pulled into the parking lot my heart sank a bit. The lighthouse was under construction. 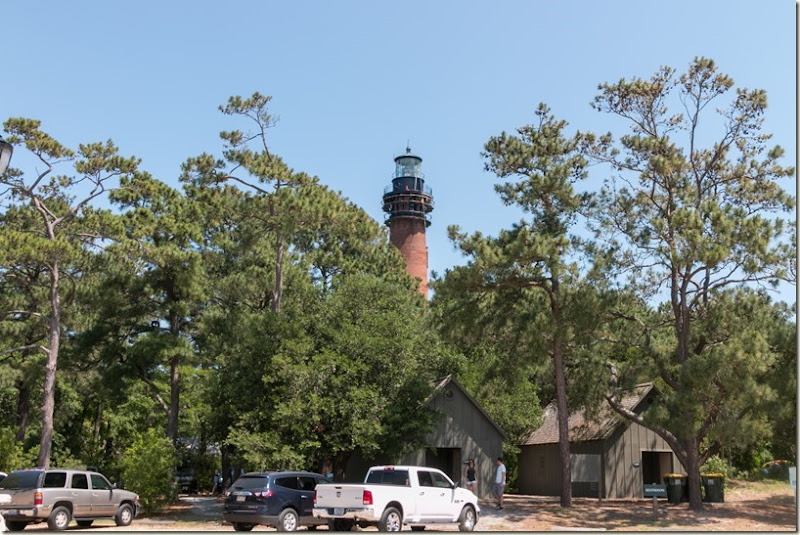 I couldn’t see anyone up there. 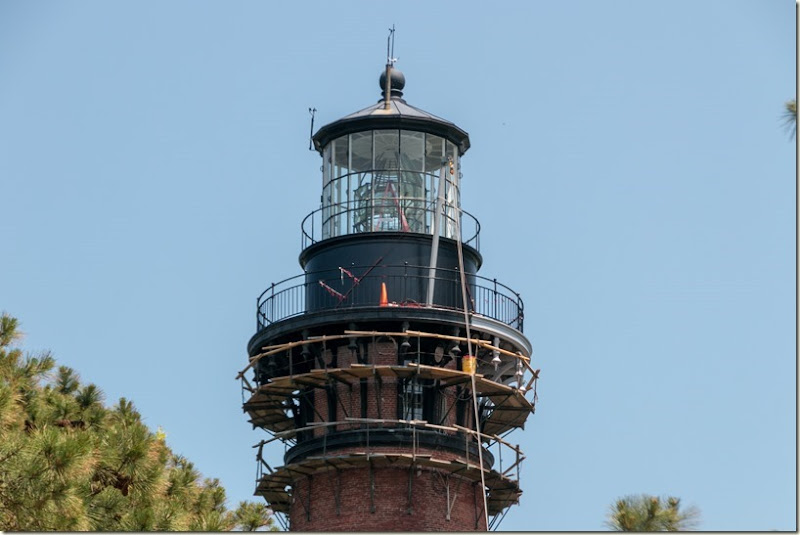 But it turned out that it was still open for climbing. They were just cleaning and repainting the iron supports for the deck. Not a job I would want to do. There was only a small part of the deck roped off for their crane. 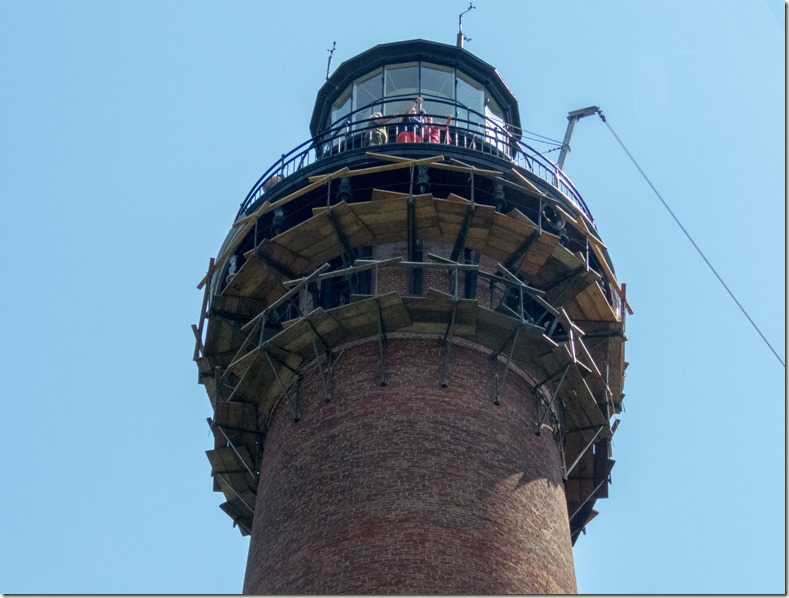 There was a slight problem though. About 100 young school kids were in the process of going up. That turned out to not be much of a problem either. With short attention spans they spent about 20 seconds up at the top before they were ready to leave.

All the the lighthouses have specific patterns on them, call day marks, so that they can be identified far out at sea during the day. This one’s pattern is to be left unpainted red brick. This was the last major lighthouse built on this coast and is a virtual copy of the one we visited a few days ago at Bodie Island. I don’t think one is run by the Parks Service because they were much more relaxed about climbing. No rules about one person on each stairway. We all just piled in and the up and down traffic tried to squeeze by each other. 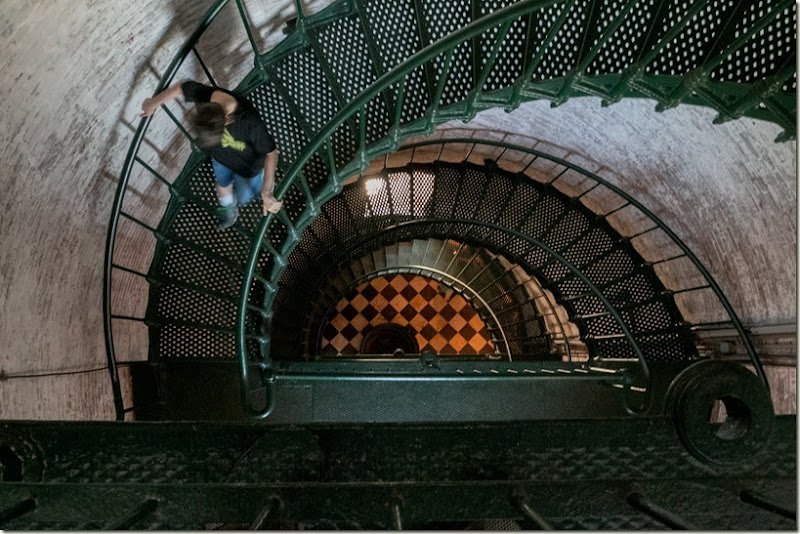 Our usual exchange of pictures. 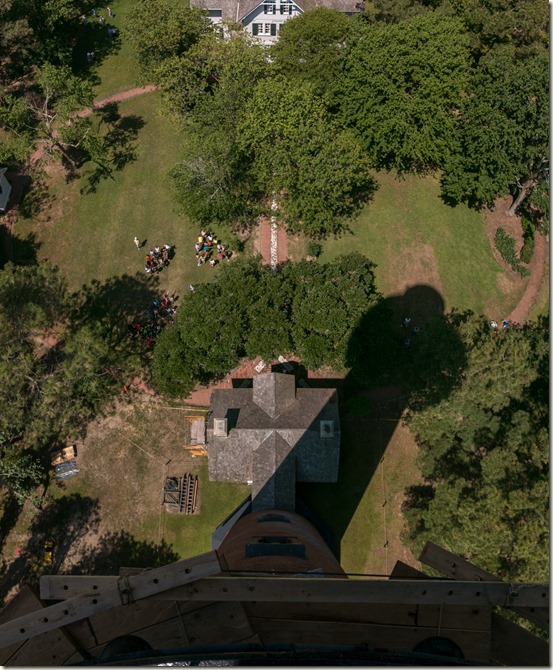 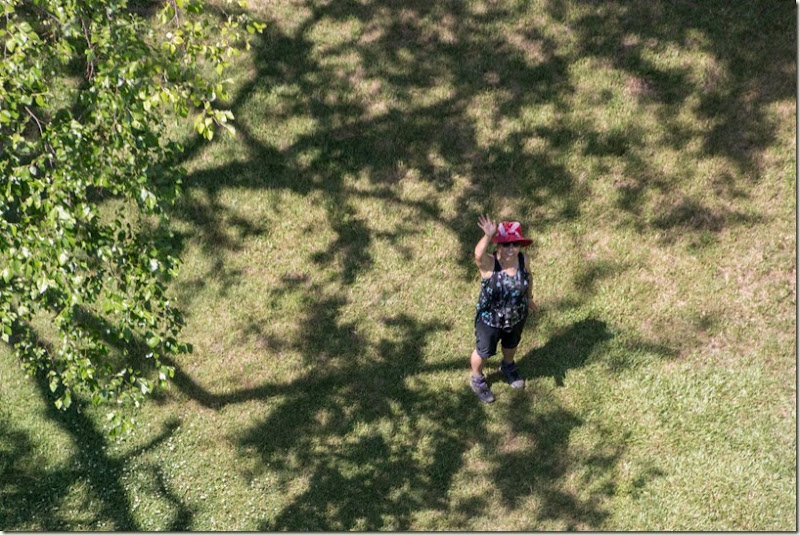 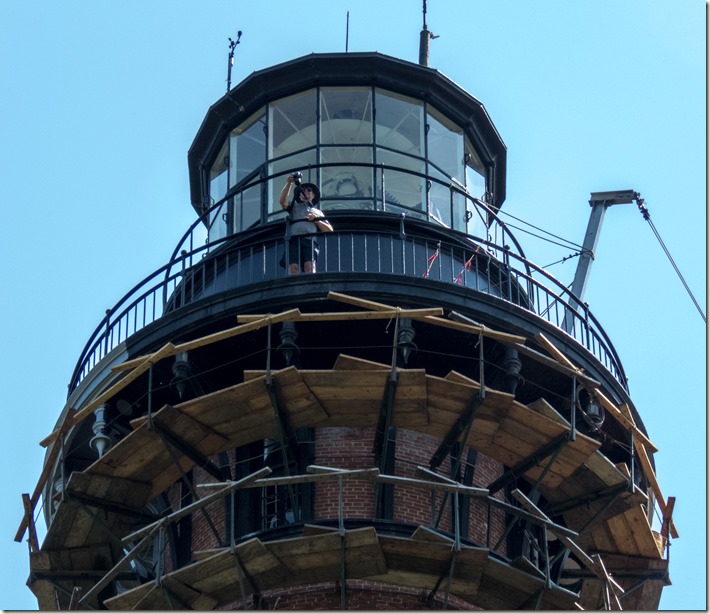 Another massive first order lens, although there seemed to be parts of it missing. 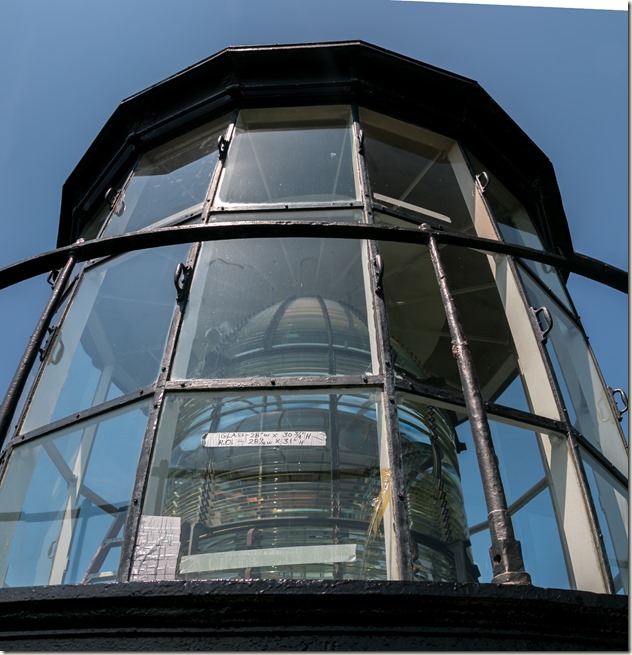 I actually had the place to myself for at least 5 minutes.

The view was not amazing but it was still great to be up there. You can see the narrowness of the banks in the north and south views. 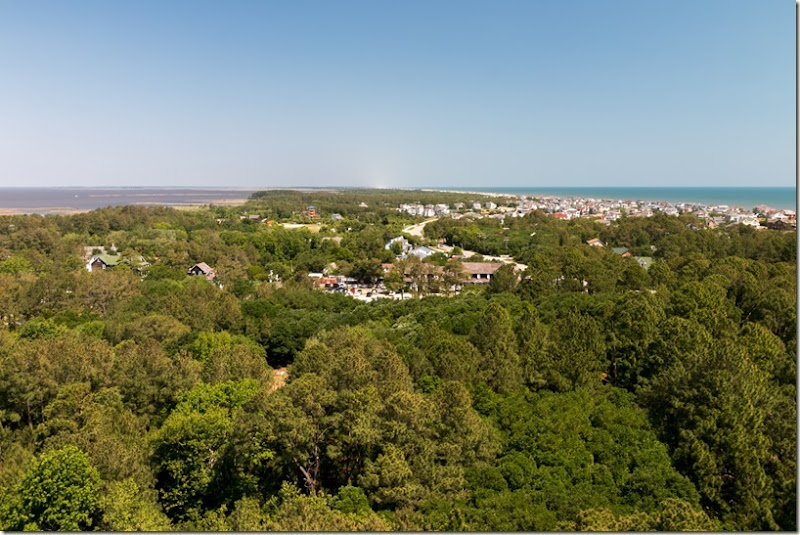 And out to the west towards the sound.

Back on the ground, Jennie was in the gift shop getting ideas for crafts to do with all her shells.

After I was down, we took a boardwalk out to the sound. These reeds are an invasive species. 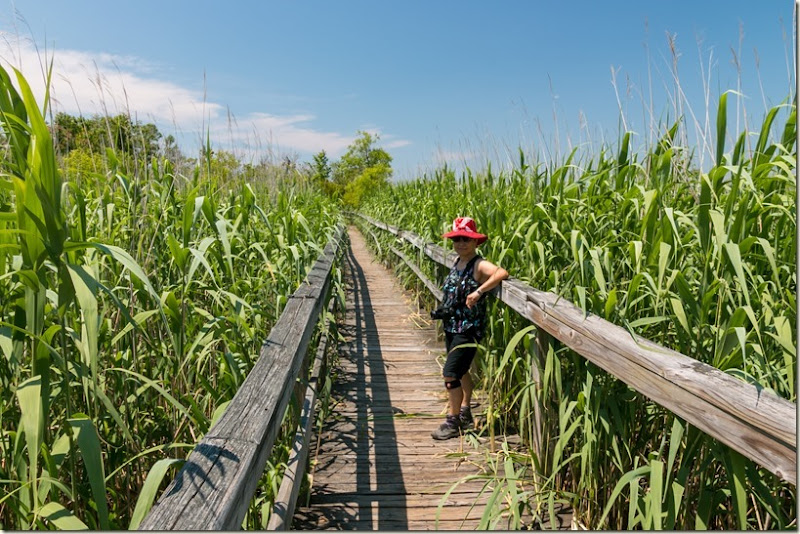 It was high tide but the tide difference is only around 2 feet so the water was very shallow. 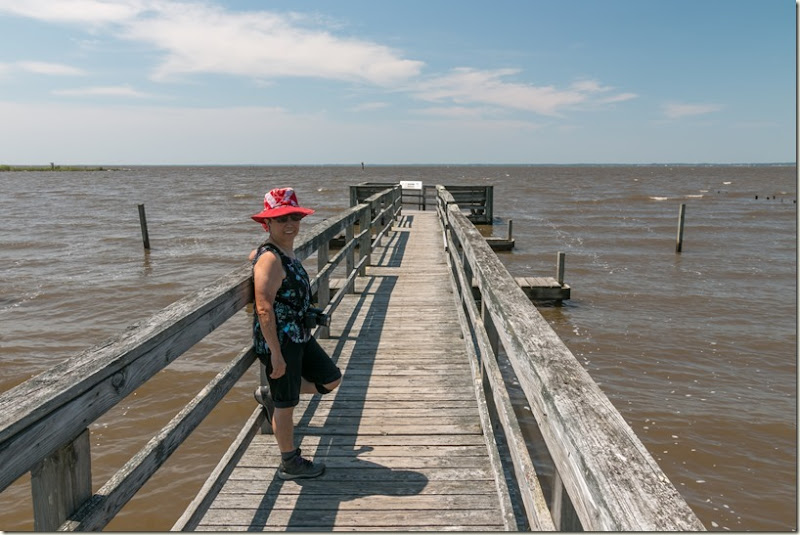 It was vey hot in the reeds but out here we sat and enjoyed the breeze. 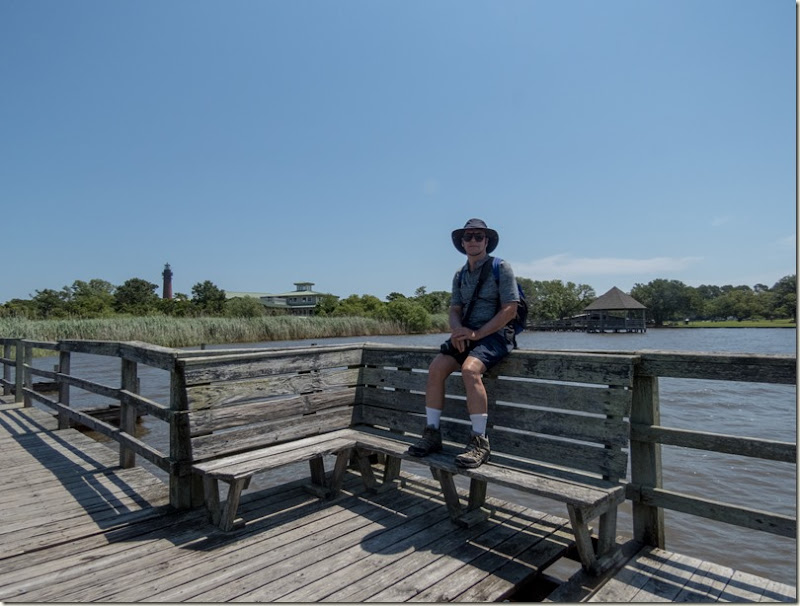 We almost had lunch here but it was too early. We decided to wait and go out to that gazebo in the background, above.

First we went to the building to the left of me, above, which is the Outer Banks Center for Wildlife Education. We watched a film about the area. The sound side is actually fresh water and at one time supported a massive duck hunt. Later conditions changed and some grasses clogged the sound but it turned out to be perfect for bass making this the best place in the world to fish for large mouth bass. But that too changed.

We checked out the displays. 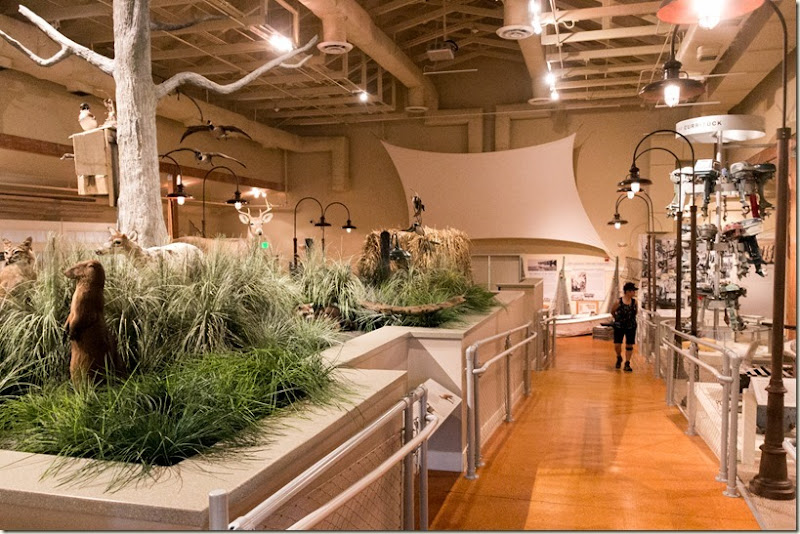 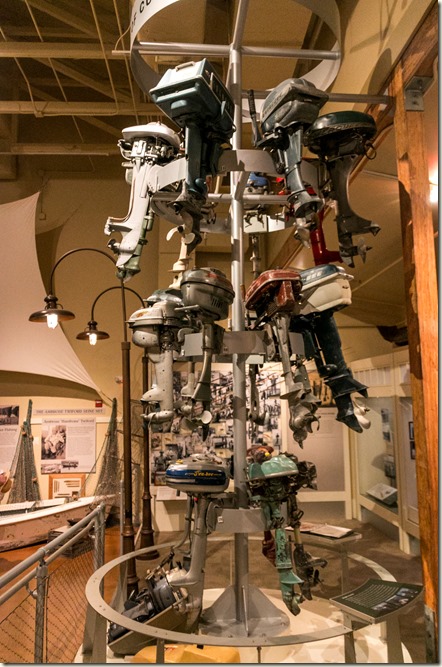 A big business for the locals was supplying all the decoys the duck hunters needed. 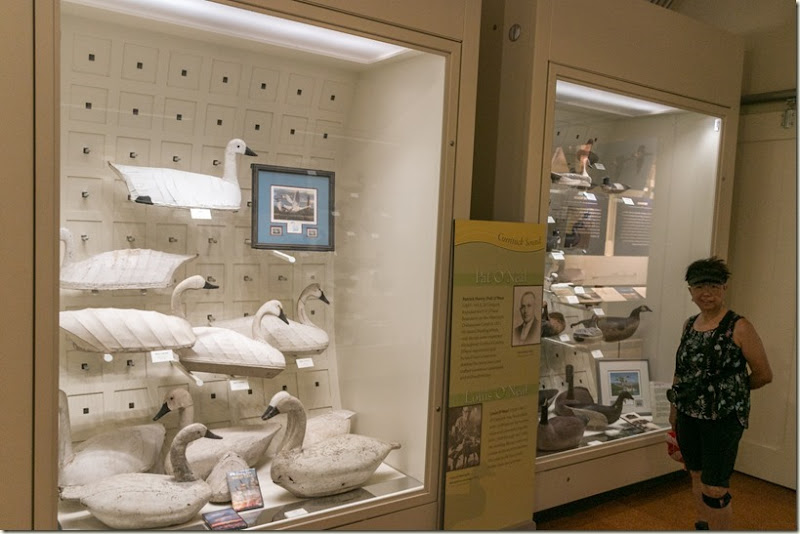 They used to sink these tubs in the shallow water and surround them with decoys. Then they would pop up and blast the ducks or geese with massive large bore guns, double the size of a 12 gauge shotgun. 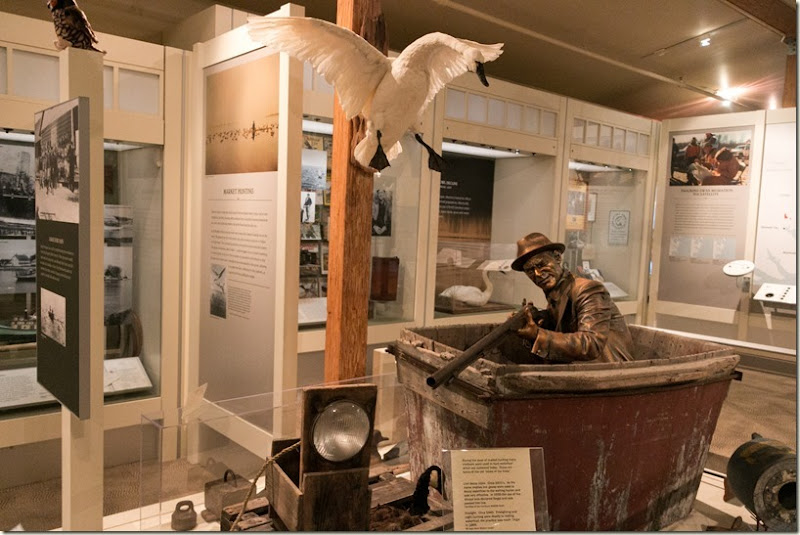 On to the gazebo. 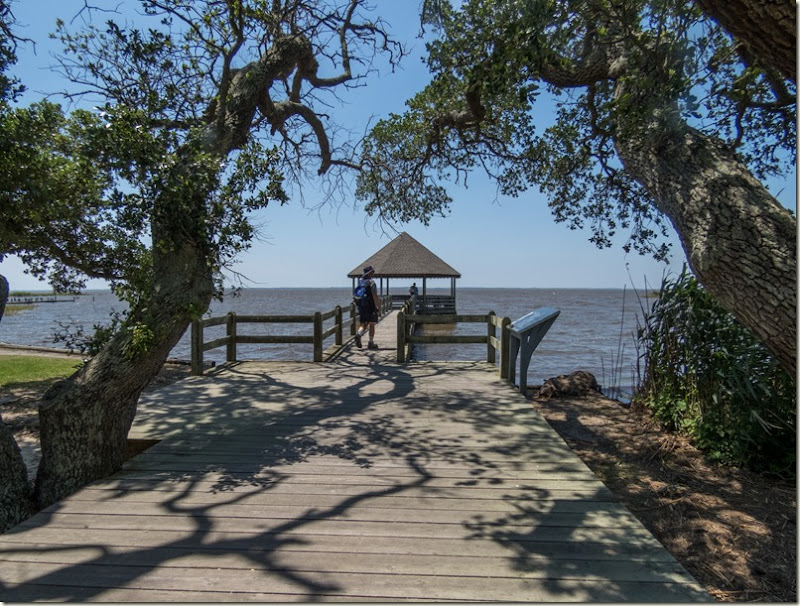 A lovely cool breeze made it a relaxing lunch.. 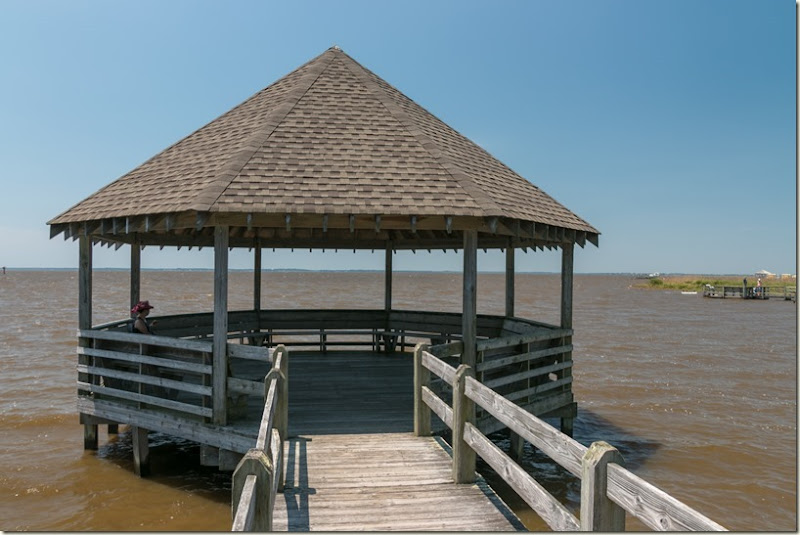 Next door was the Whalehead Club which was used by the very rich hunters when they came to the islands. 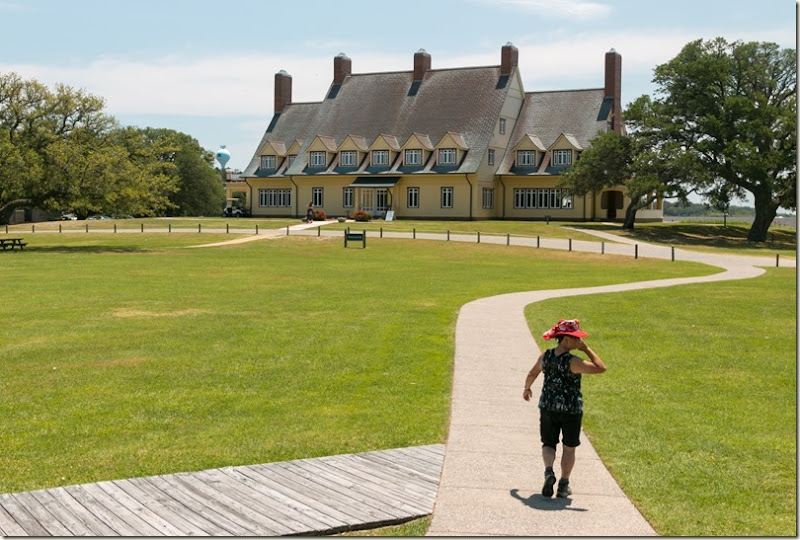 There was a sign saying that it was open for tours but it said to inquire inside for the price, so we passed.

There was also a nice little harbour with a boat house and docks. 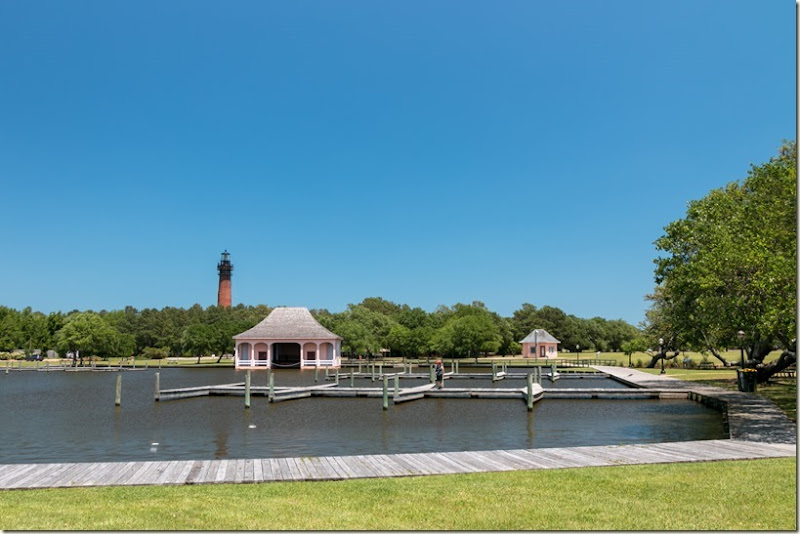 This walking bridge was over the mouth of the harbour. 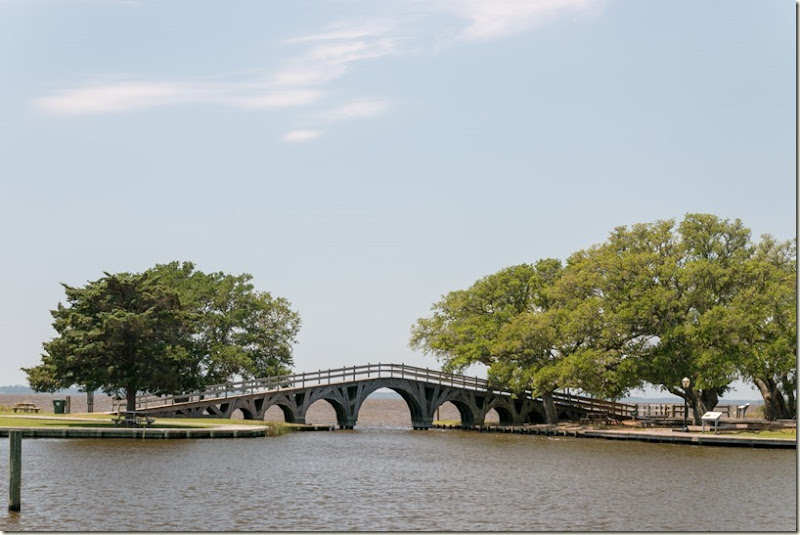 On our drive back I had read that a good place to stop was the town of Duck. There was supposed to a 3/4 mile long boardwalk with some interesting shops. Well, there were some shops at one end but the rest was just a boardwalk along the waterfront. Nice but not what I expected. 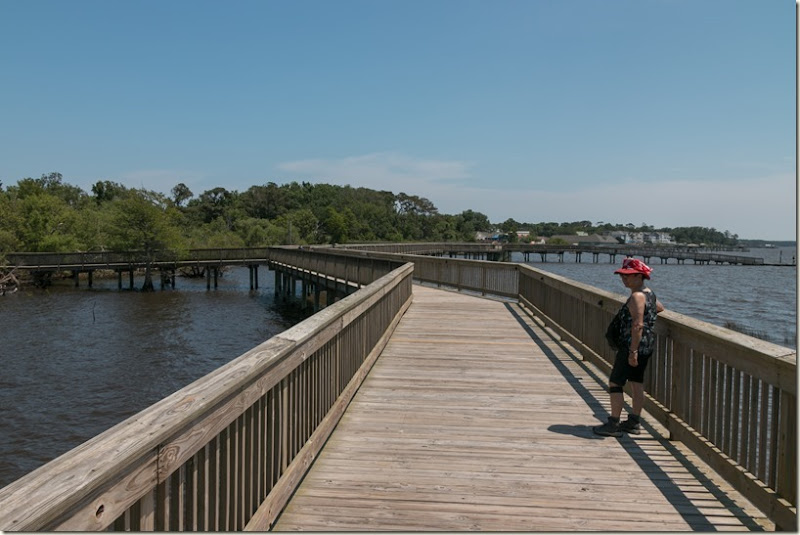 I had also read that we should try Duck Donuts. They take your order and only then make the donuts. Alas, it turns out they are only open from 9am to 1pm.

I guess the water towers are the only high points around, judging from the number of antennas up there. 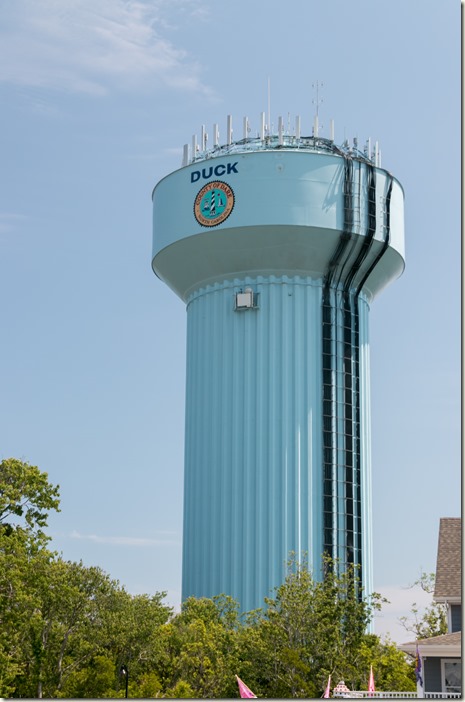 Then home and another nap. Some more left over BBQ for dinner.