May 25 – Cape Henry Lighthouse and Boardwalk

I forgot about these two lighthouses when I said that the Currirtuck Beach Lighthouse was the last one.

Today was a mix of bright sunshine, dark clouds and heavy rain. We only got caught once. The forecast for the morning was better so we headed to the lighthouses.

The interesting thing about them is that the National Historic Site is located within an active military base called Joint Expeditionary Base Little Creek / Fort Story. The base is just next to the state park.

I wasn’t sure how they would handle non Americans but we gave it a try. It turns out we were no different from everyone else. You have to supply your driver’s license and registration. Then you have to open all the door and compartments in the car and they examine it. The car in front of us was jammed with luggage and I was worried that we were going to have to wait while they searched it all but they just gave it a quick glance. We got our pass good for 4 hours. Obviously, no pictures of this procedure.

The ground view of the new one. 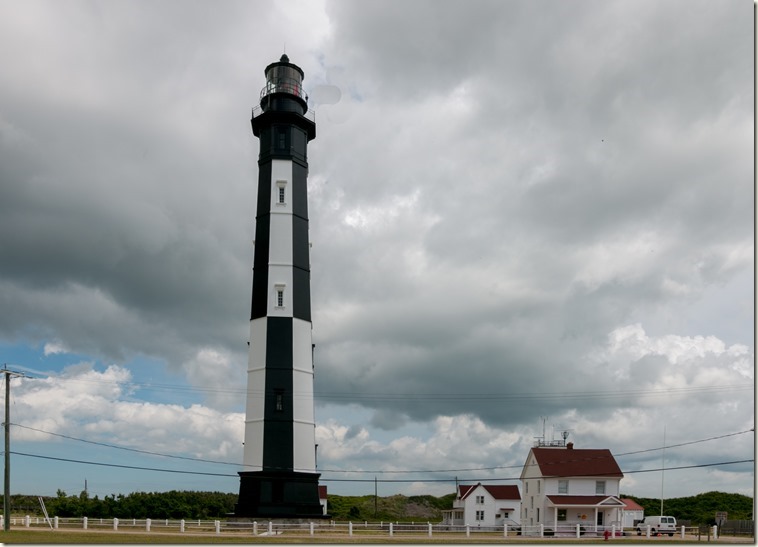 And just across the road, farther inland, on a hill was the old one. 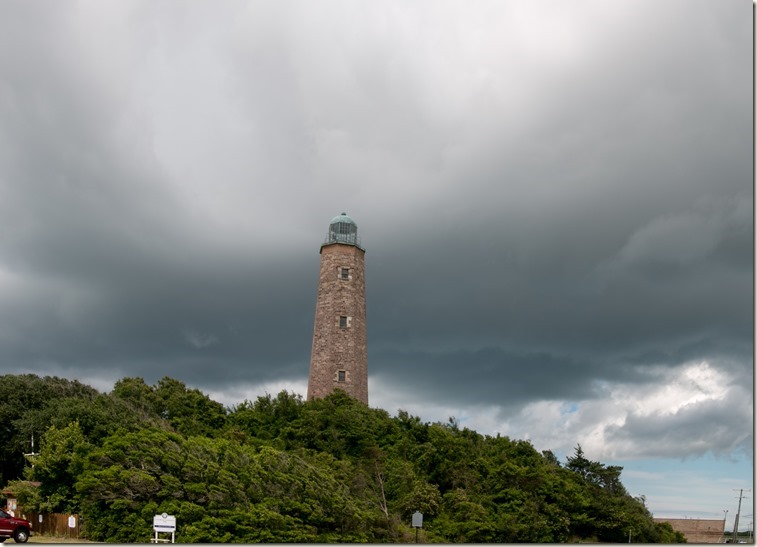 There is no light in it. Also, no balcony so you can’t go outside. 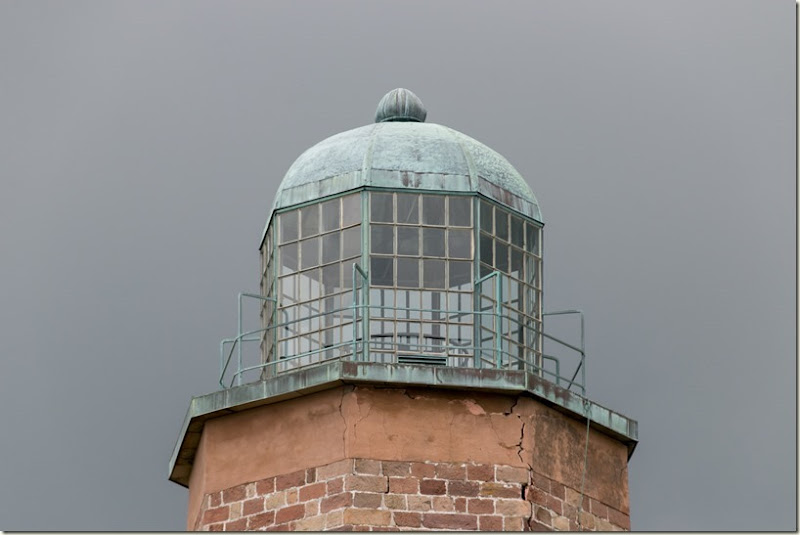 The brick work looks like it is having some problems. 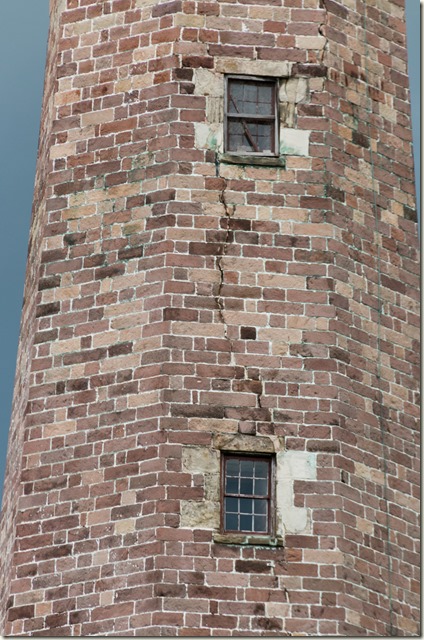 Anyway, I paid my $7 senior admission (55+) and went in. First you have to climb up the hill to the base. 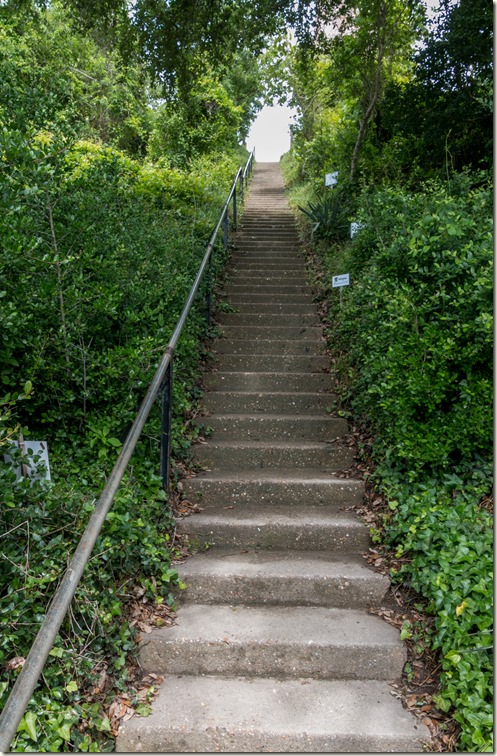 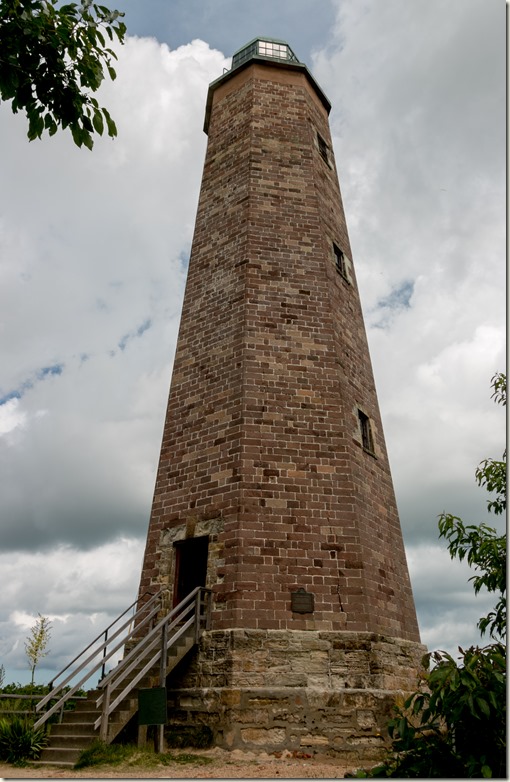 Then up you go in one long continuous spiral with no landings. 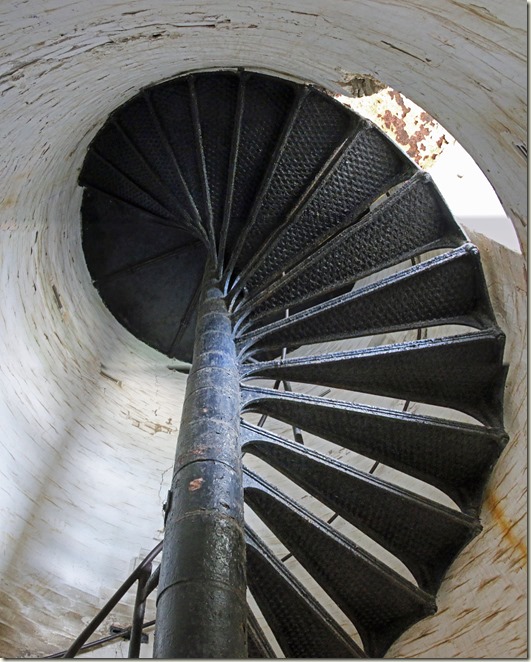 Near the top you have to climb a short straight ladder and then another short curve to the light room. 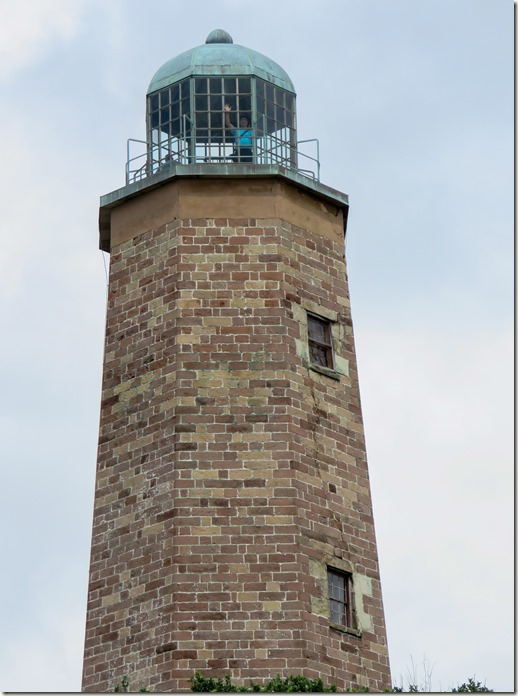 It was not all that interesting a view. The windows were plastic and had been heavily scratched with names. It was also VERY hot.

This is the view south. Jennie is in the red circle. 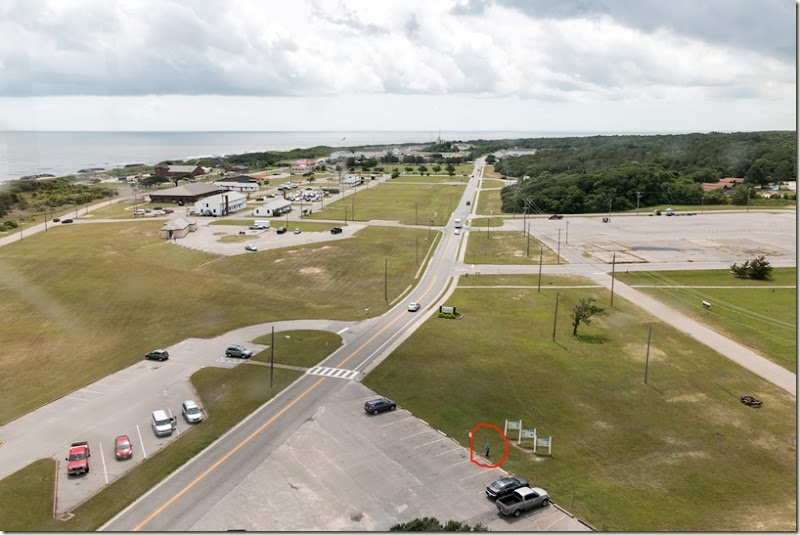 A high view of the new lighthouse. 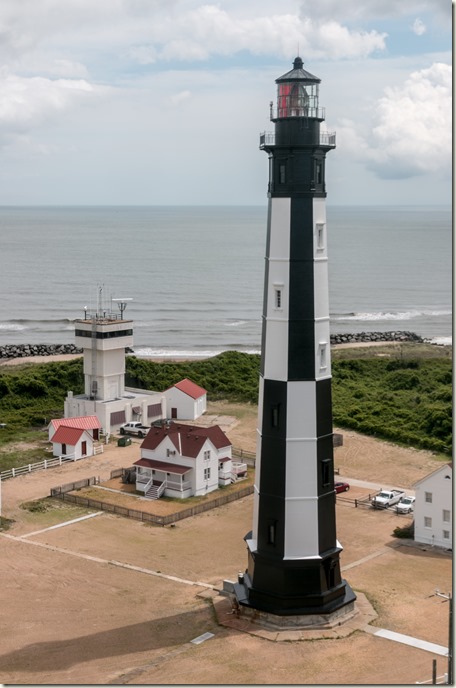 I guess it flashes red to the north. 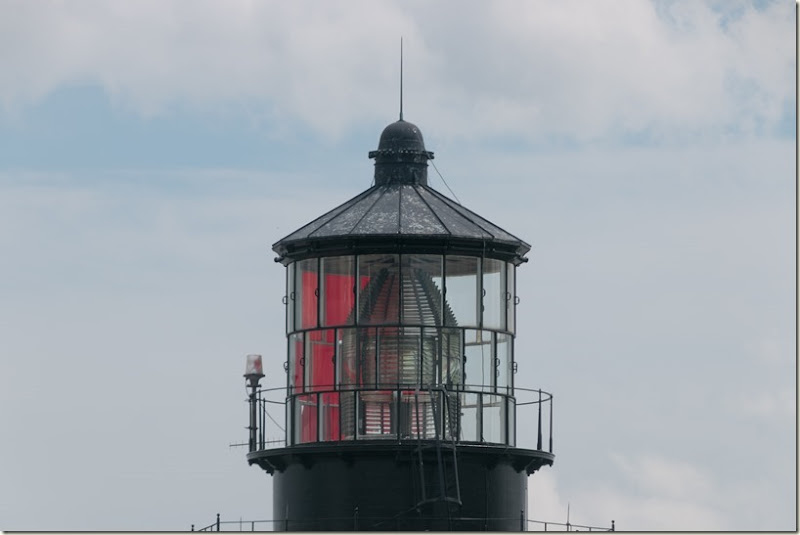 I didn’t stay up too long. Time to head back down. 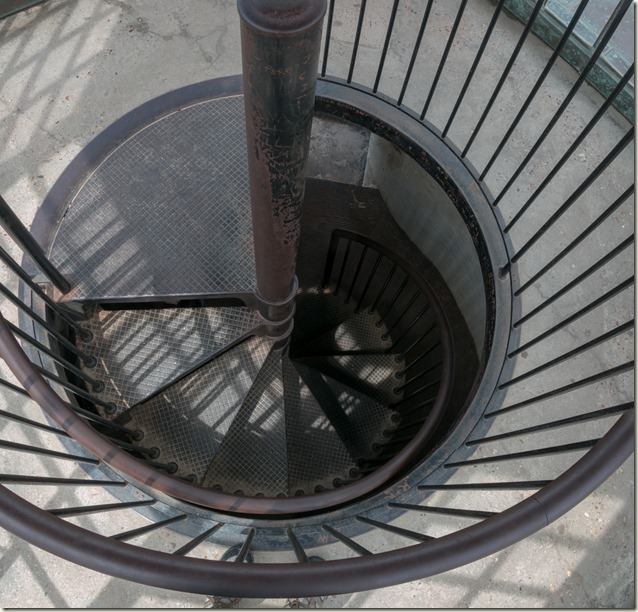 By now there were a lot of dark clouds up there. This line went over us but there was no rain. 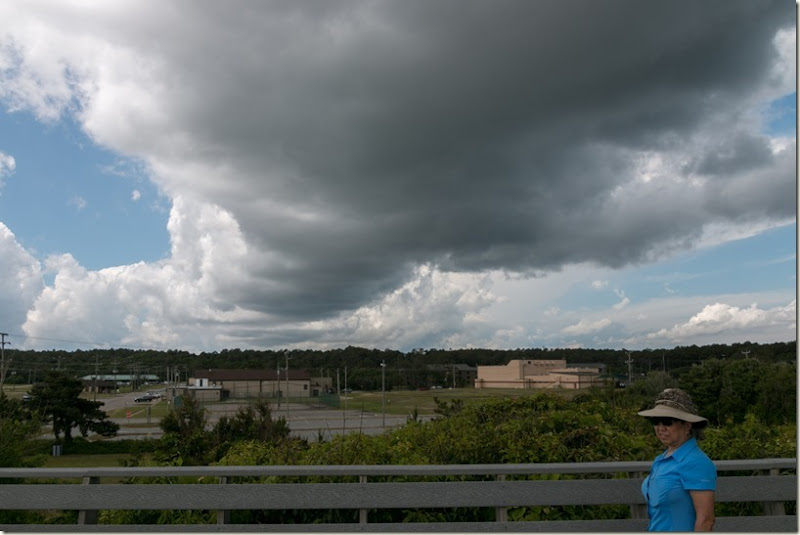 We went back to the RV for lunch and then did some grocery shopping. While we were there it poured for about 15 minutes. Then back to sunshine.

Unloading back at the RV, it was not that hot but so humid that it was back to the beach / boardwalk in Virginia Beach we go.

The beach and the boardwalk were much busier today. Lots of chairs and cabanas out.

We parked a bit farther south from where we ended last time. Yesterday we didn’t have to pay for parking. Once you get to the boardwalk area all the hotel lots are private and the street parking is $2 an hour. 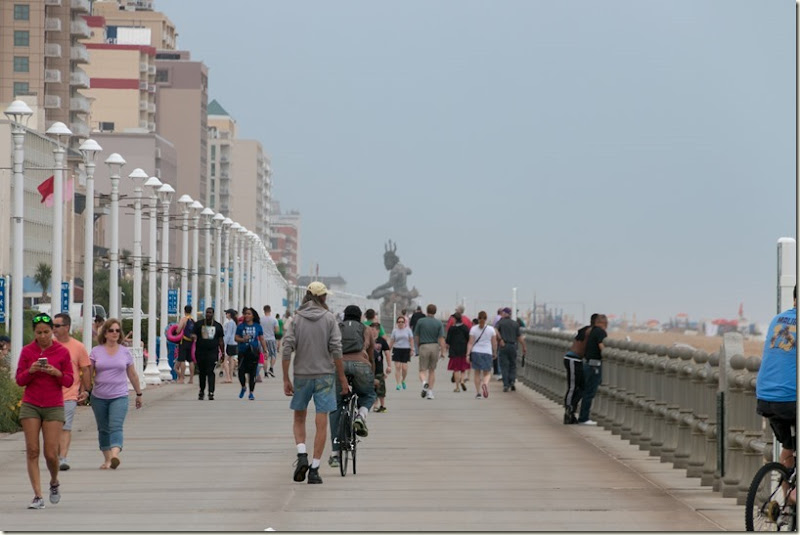 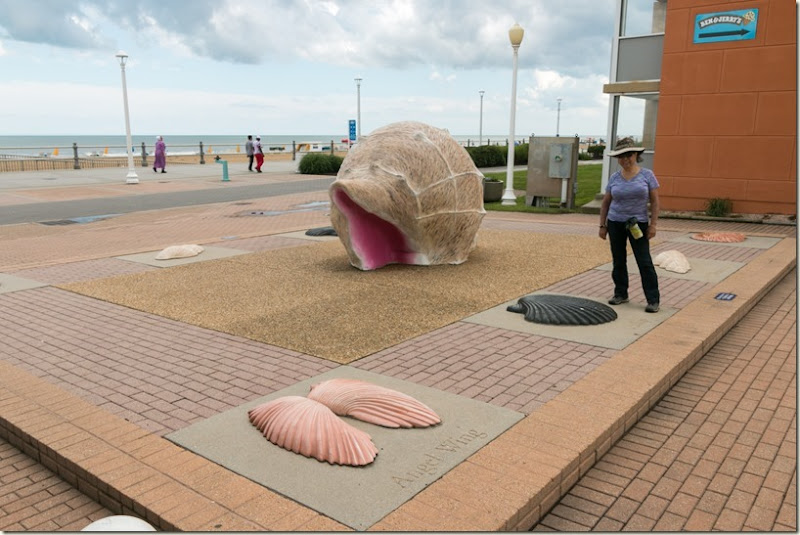 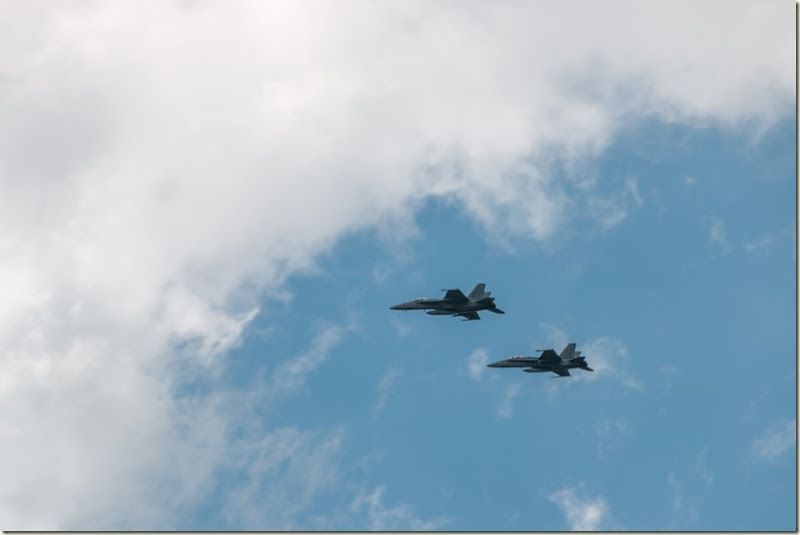 The hotels seem unusual to us. They are all very narrow, as there are only rooms on the beach side. 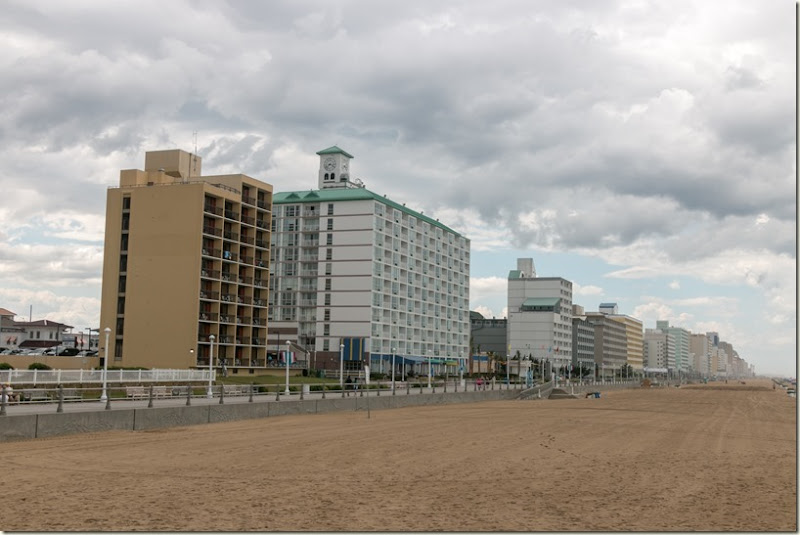 A new to us flower in one of the hotel gardens. 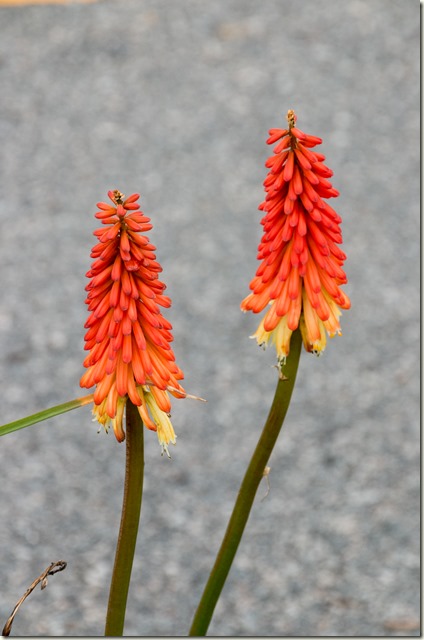 I don’t think Mimi was tending her own cart today. 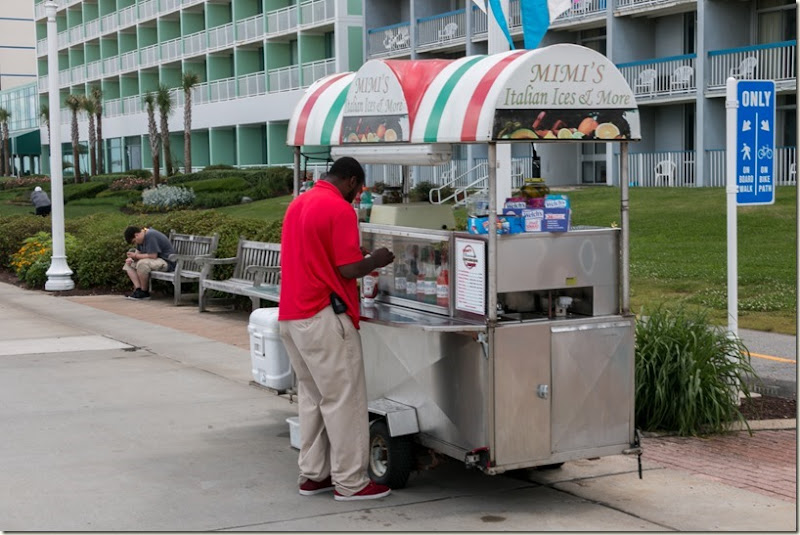 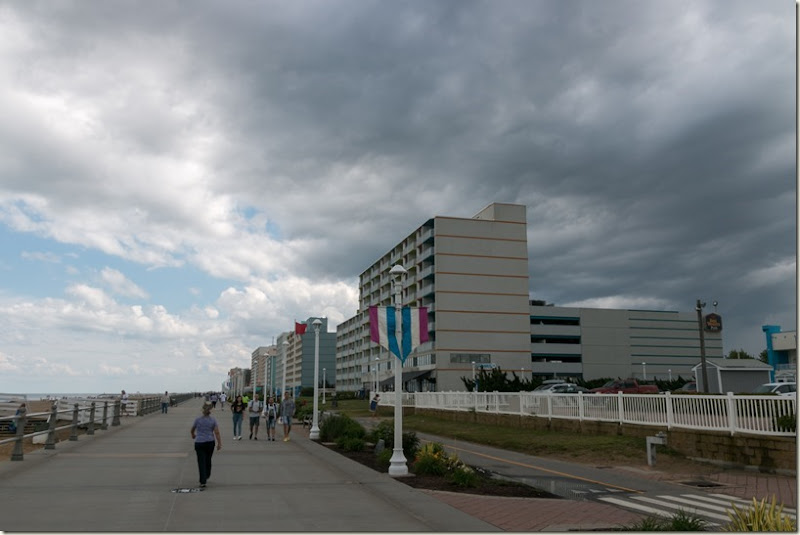 Looking up the beach, we could see it coming.

We had our raincoats and I had a plastic bag in the knapsack for the electronics so we were OK but it was still hard enough that we took shelter in one of the stores.

No more pictures as I had put everything away but the rain soon stopped and we continued down the boardwalk. I think we did about 1.5 miles before turning around. Distances are very deceiving when the boardwalk is so long and straight.

Back at the RV we got a true thunderstorm with lots of wind, rain, thunder and lightning but we were all tucked in napping.