May 5,6–To Ocracoke on the Outer Banks of North Carolina

As predicted, yesterday was a rather rainy day. 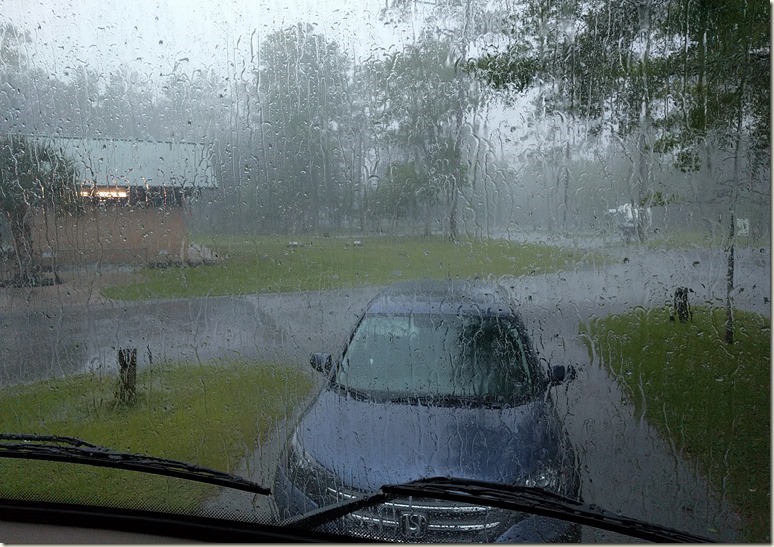 It stopped in the afternoon. This was the extent of our flooding, which I hear is nothing like what they are getting back home in Ontario. 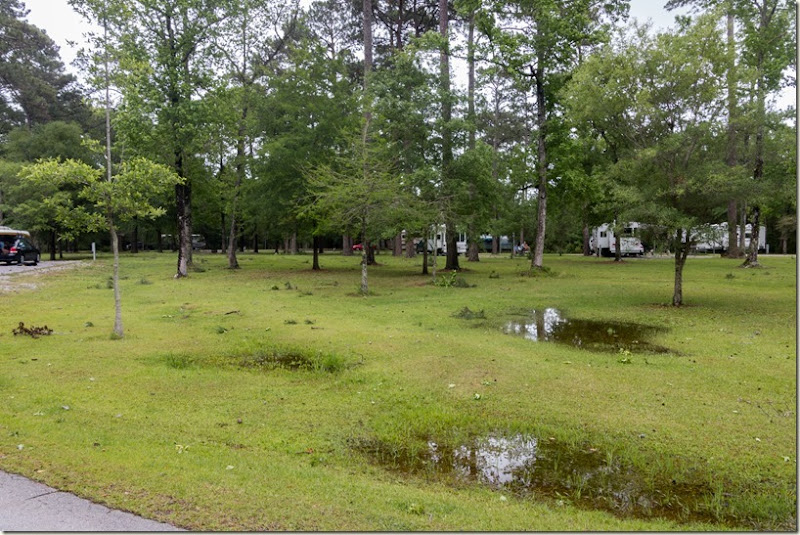 We had a lot of wind as well. This large branch fell just behind the RV. 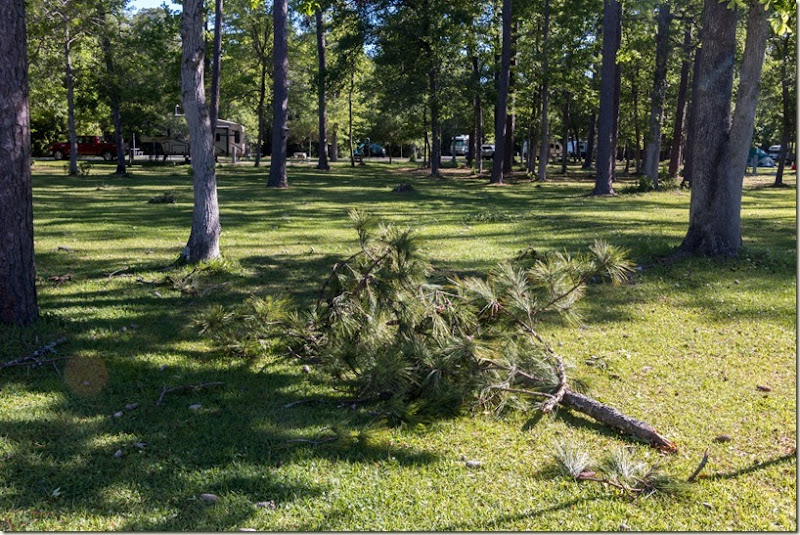 Just to get outside, I walked down to the waterfront in the park and did the short, looping Tidelands Trail. The forested part of the trail had some wind damage as well. There was a nice long boardwalk out over the water. 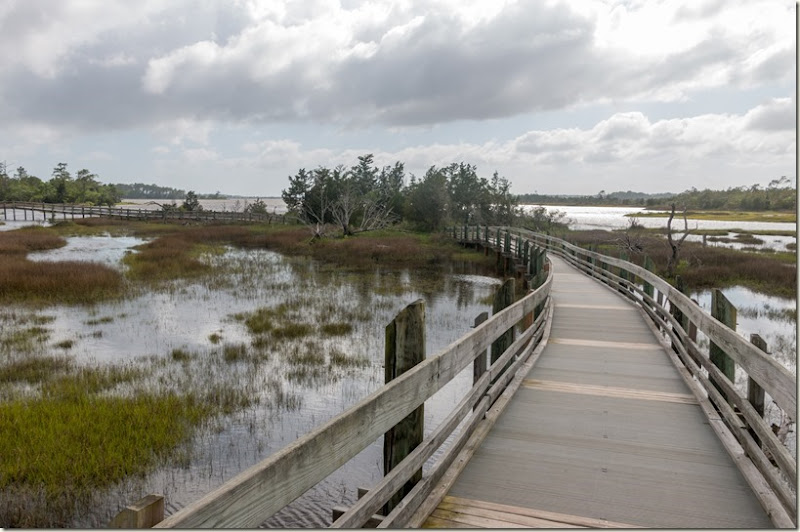 There was not much wildlife to see. These three were just about it. 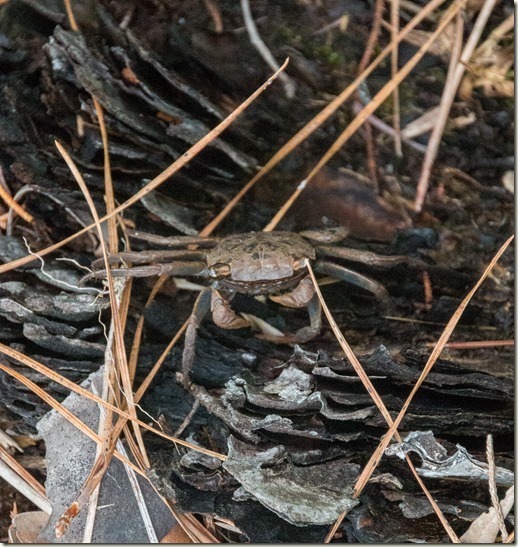 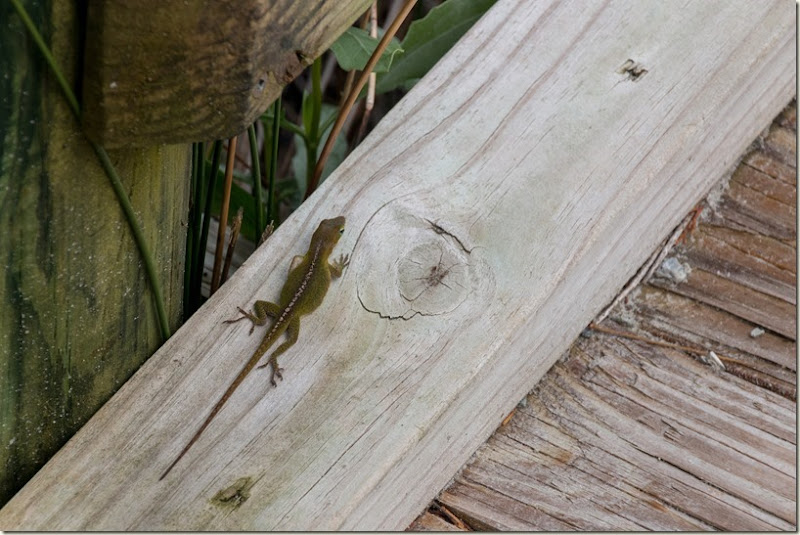 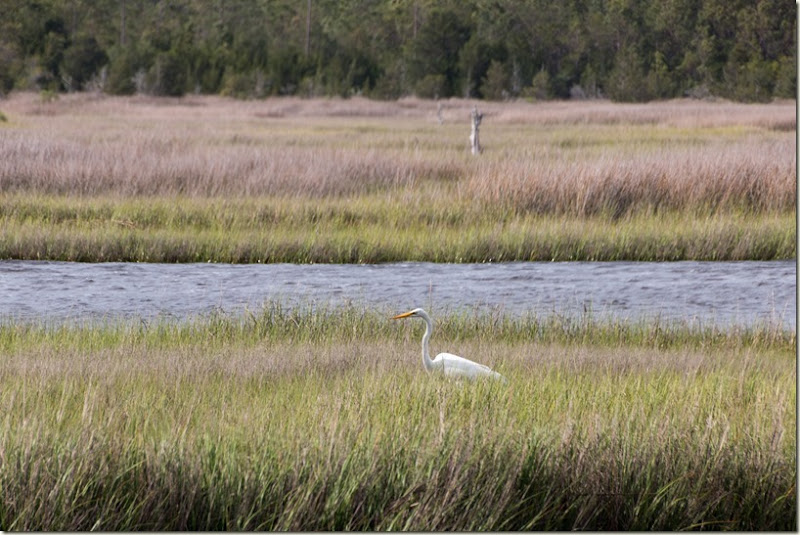 Today we headed out on to the Outer Banks of North Carolina, or the OBX for short.

First we drove up to Cedar Point to catch the ferry. 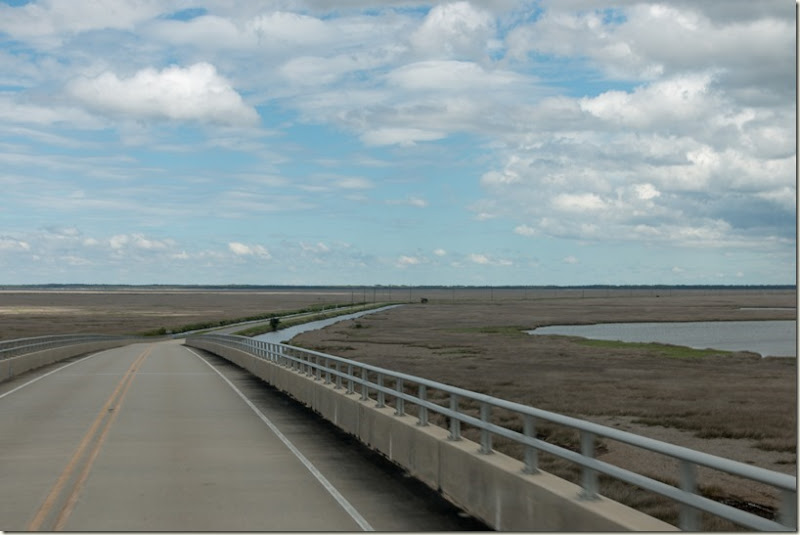 A very narrow road with zero shoulder and no room for error. This section doesn’t show it but there were also a lot of very sharp corners. 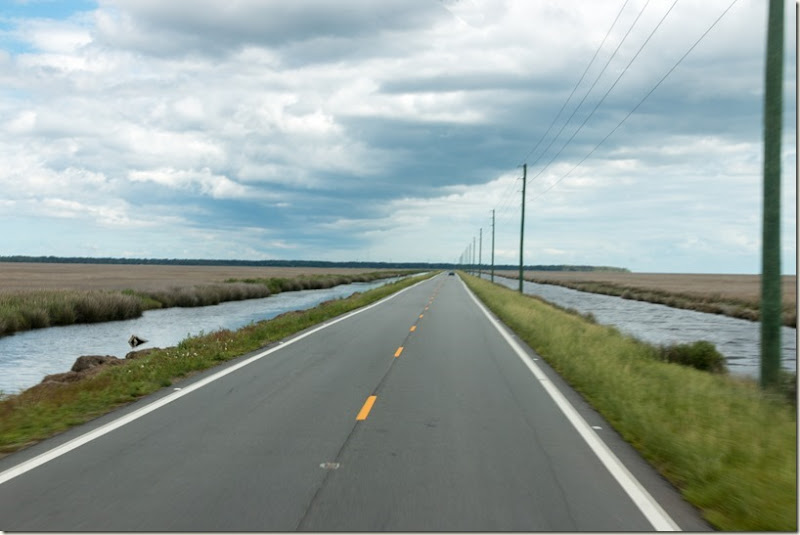 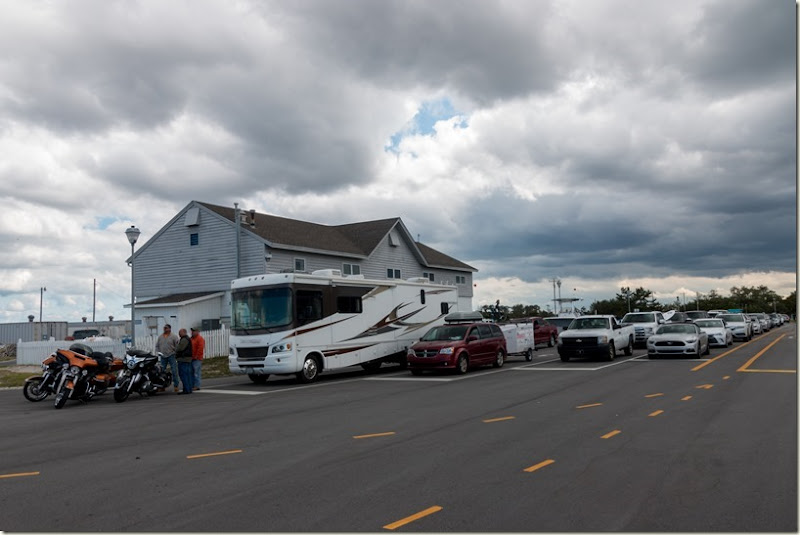 I was actually too wide for the lanes on the ferry and took up two. Everybody did get on so I didn’t feel too bad.

It was a another very windy day. They tucked me in against the cabin so I didn’t feel the full force. 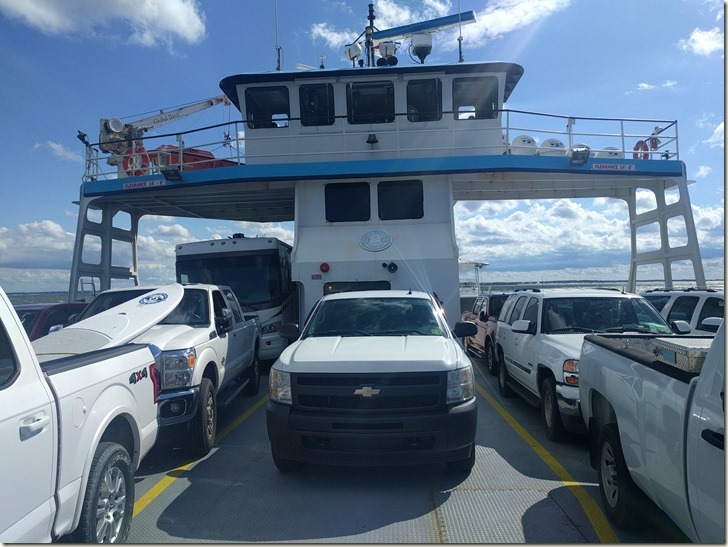 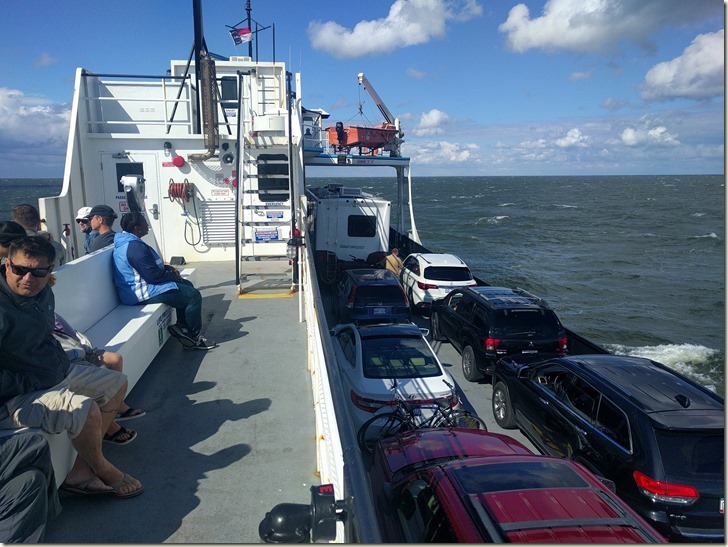 The wind also caused some big swells. I would guess they were in the 4-6 foot range. The rocking and rolling was not too bad but Jennie said that it was starting to bother her. To make it worse the RV sways a lot more than the boat because of all the weight on its springs. It was even disconcerting to me to be sitting in the front and feel it tip over farther than the boat.

Having no one beside us did make it easy to get in and out.

I did some more photospheres because why not? Number 1 and number 2.

The ride was 2:15 hours long. We arrived at the Ocracoke Campground of Cape Hatteras National Seashore at about 6:30 pm. Arriving this late you just pick a site and register in the morning. 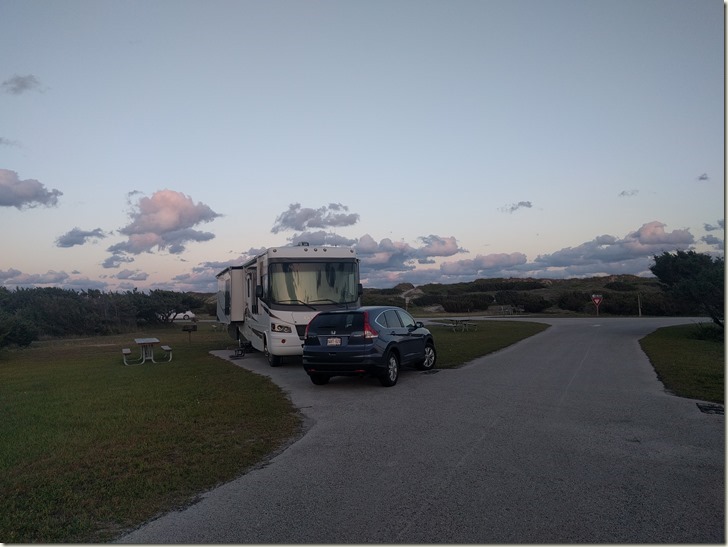 The beach is just behind that hill of dunes. I did a quick walk over to check it out. This is the view back from the top of the dune. 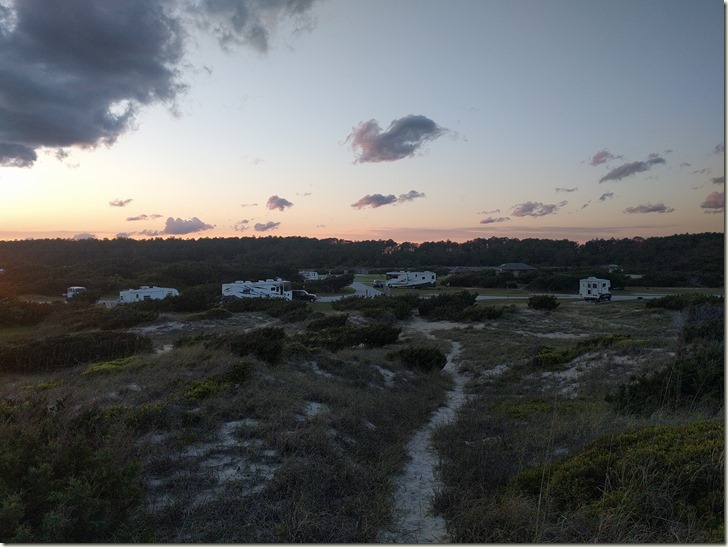 Unfortunately it does not look like the beach is a great one for shells. 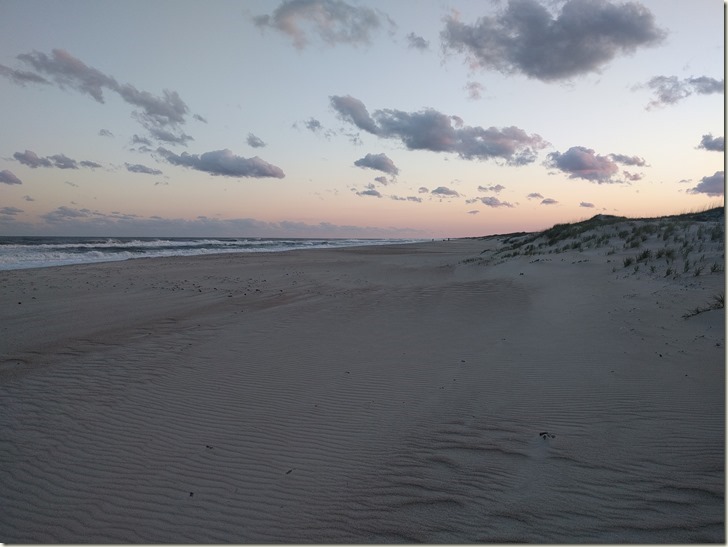