Another day, another ferry to a beach.

Today we headed about 15 minutes south of the campground, to Hammocks Beach State Park. You must take a 20 minute ferry ride ($8 and $5 for us) out to the offshore part of the park on Bear Island. The ocean side of the island has a 3 mile long beach.

The forecast for today called for rain in the later afternoon and rain most of tomorrow. We decided to head out as early as possible and see how long we could stay. The ferries run every hour on the 1/2 hour and we caught the first one at 9:30.

We first walked south and then looped back north past the walkway before returning to the ferry. 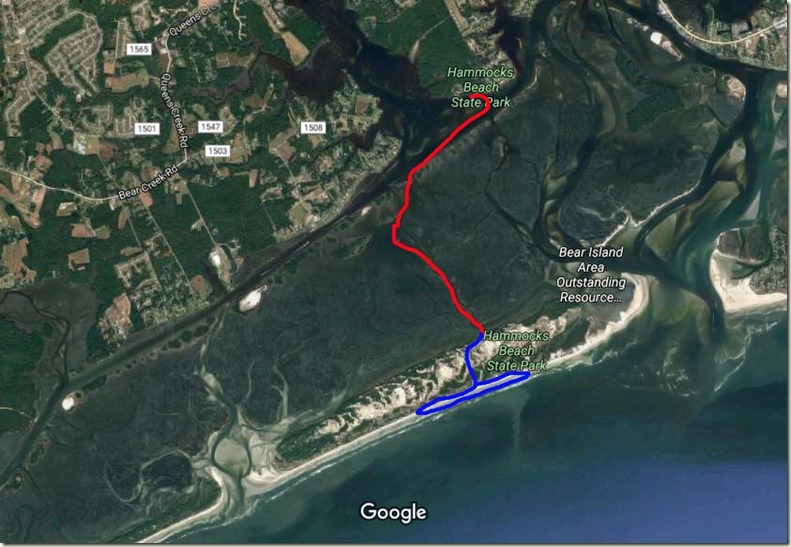 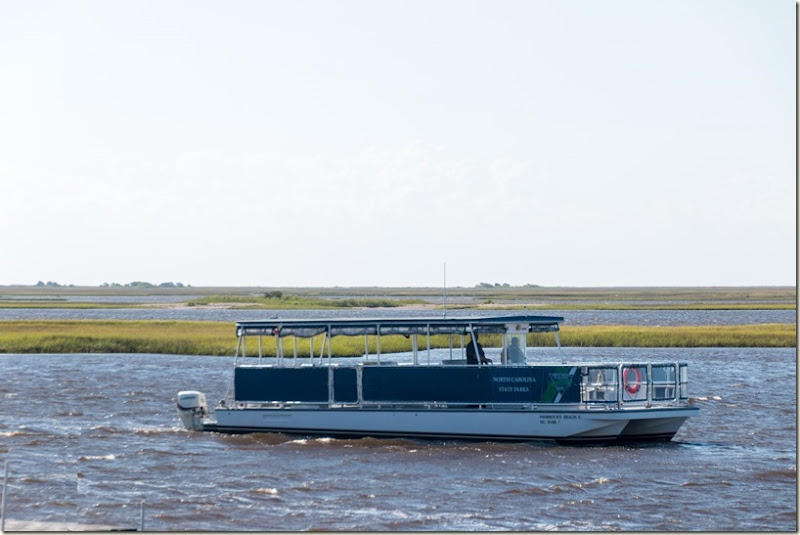 And it actually was “our” chariot as we were the only ones on it. 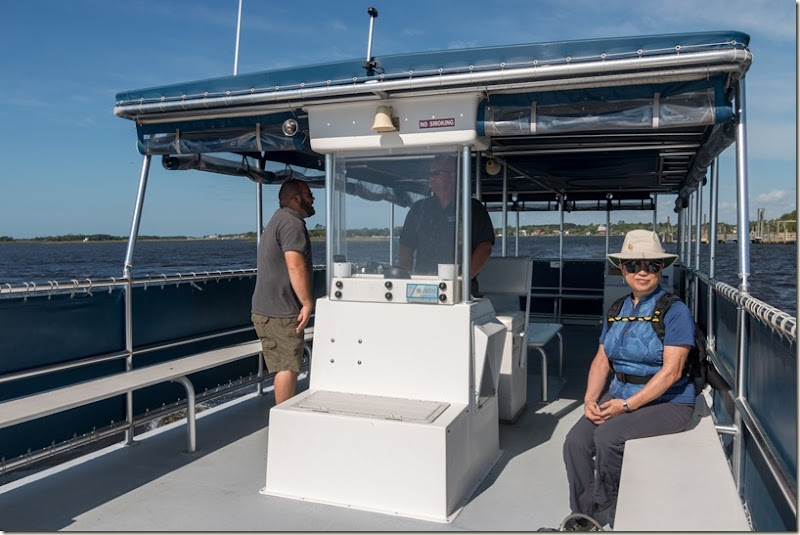 The Intercoastal Waterway passes by here. It allows non-ocean going pleasure craft to make it all the way up the coast without having to be exposed to the open ocean. We saw several large cabin cruisers blasting by and probably sucking up a LOT of gas. 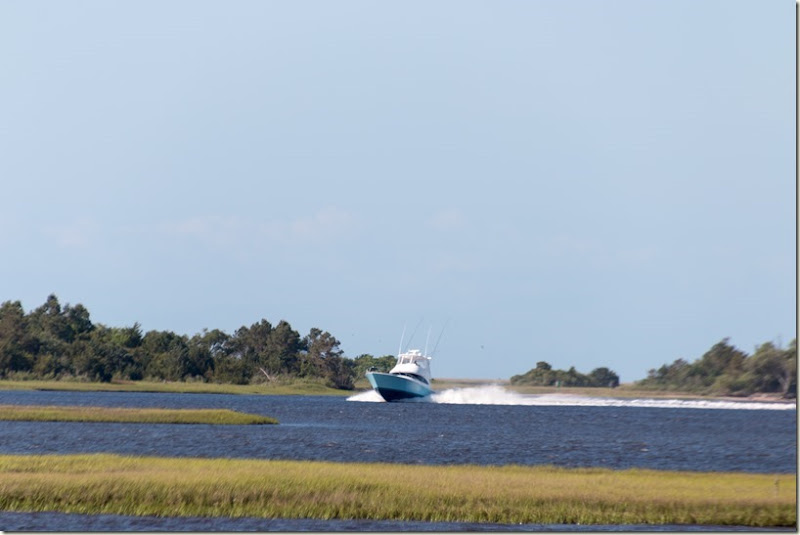 There are a lot of large homes on the waterfront. This was someone’s modest dwelling or maybe just the summer cottage. 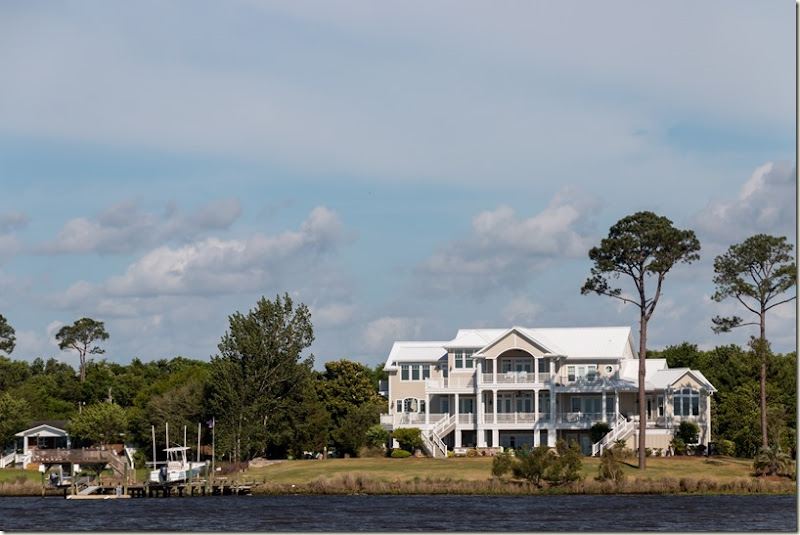 We had to weave our way in a narrow channel dredged out through all the sand bars and small grassy islands. 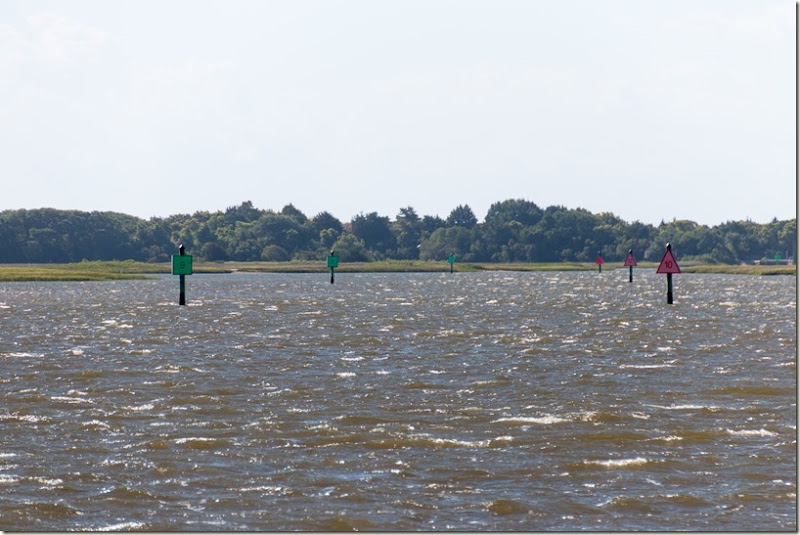 This bird was standing on the sand right next to us. 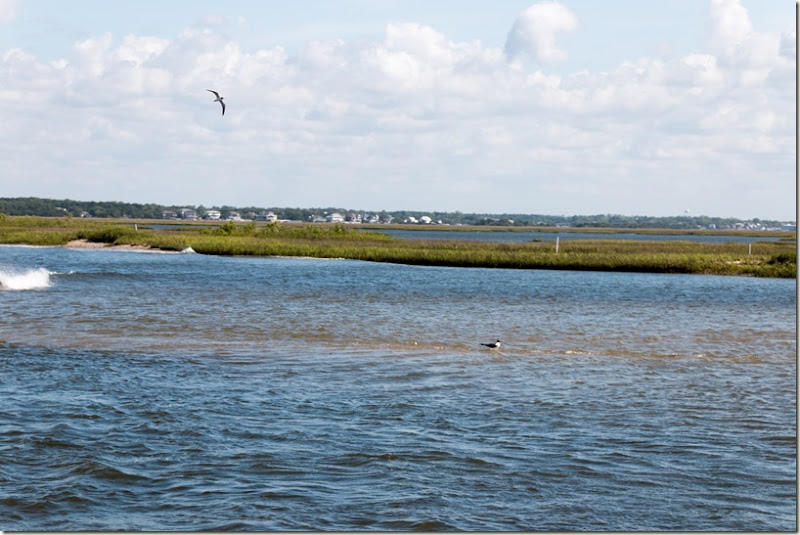 Arriving at Bear Island. This side had a thin line of forest but the rest is all sand dunes. 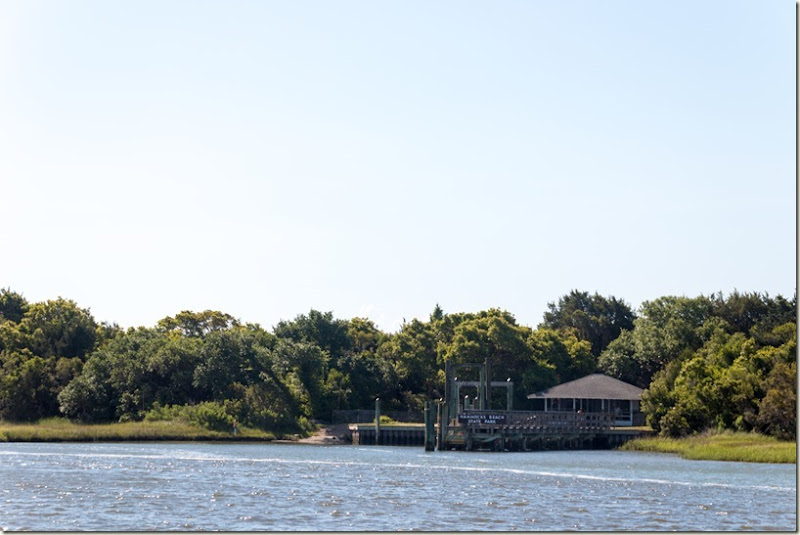 The 1/2 mile trail to cross the island. We were startled by a bright green snake that was sunning itself on the road but by the time my heart slowed down and I thought to reach for the camera, it was gone. 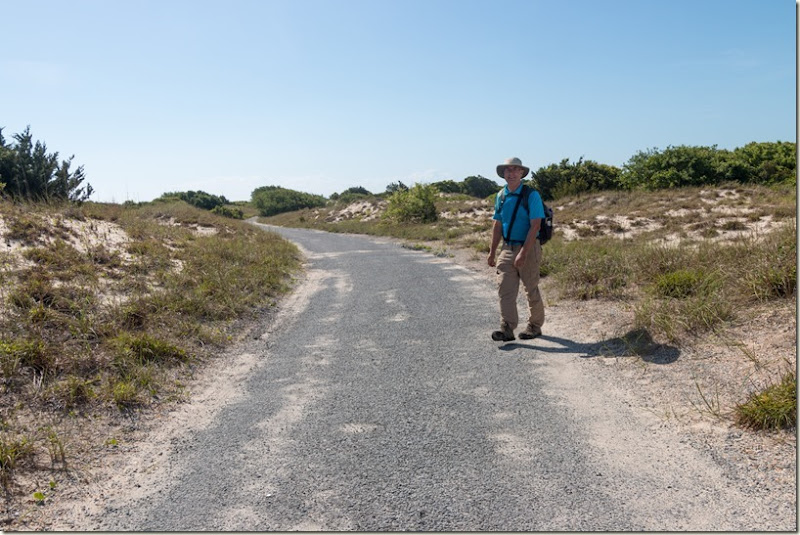 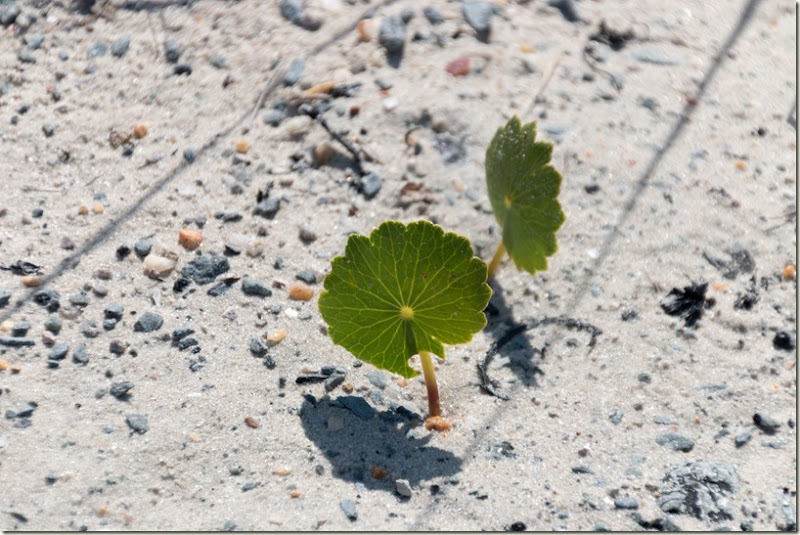 Just before the beach there is a long line of dunes. They have a boardwalk with some picnic shelters, washrooms and a concession stand that operates in the summer. 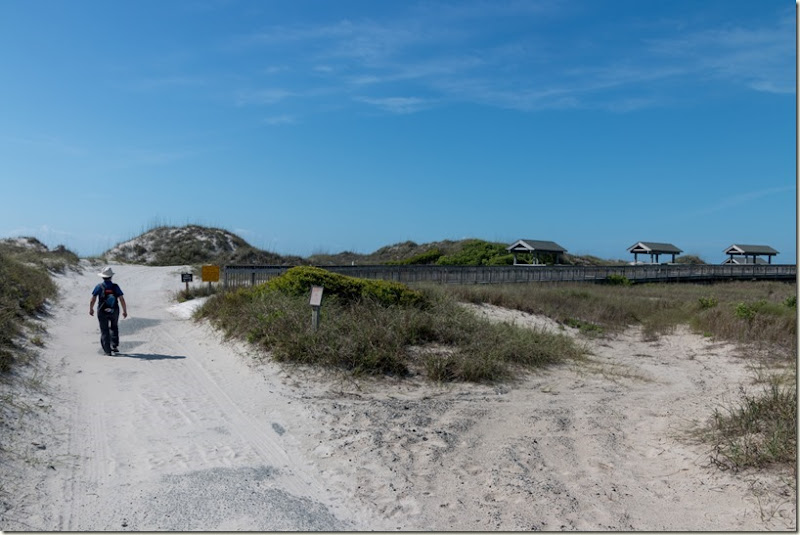 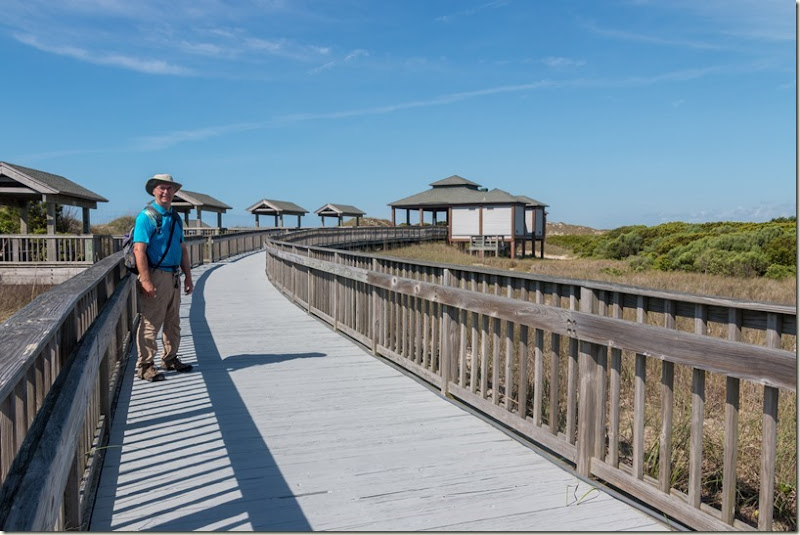 And out onto the vast empty beach. People are allowed to camp overnight on the island. The guys on the boat said that other than us there were only about 5 people on the entire island when we got there. 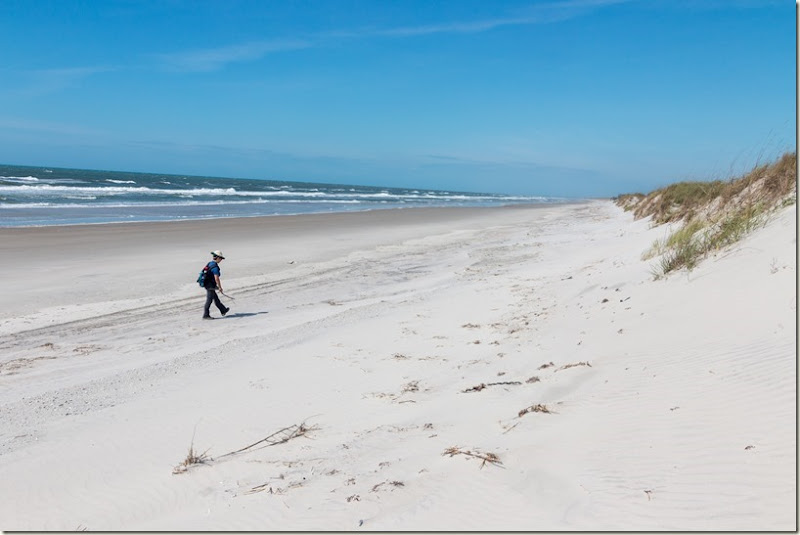 It turns out that it was not a great beach for shells. It seems to be flat and shallow for a long way out which I guess makes it difficult for the larger shells to come in. There were lots of of small ones so Jennie still collected a small bag full.

I did another photosphere, just for the record.

One nice thing about the shallow water was that it was very warm. I spent most of the time wading in the surf.

I love to watch the pelicans. They seemed to like to glide up and down the beach floating on the updraft from the dunes. They hardly ever had to flap. 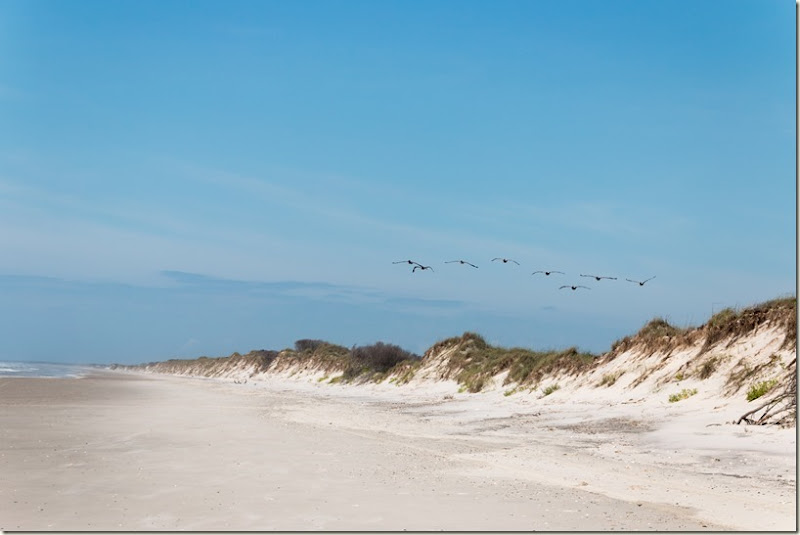 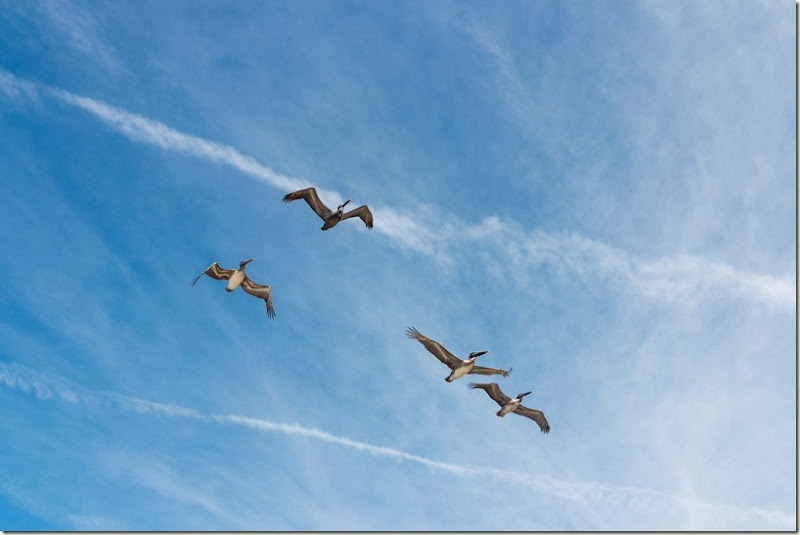 The flew rather low so it would surprise you if they came up from behind. 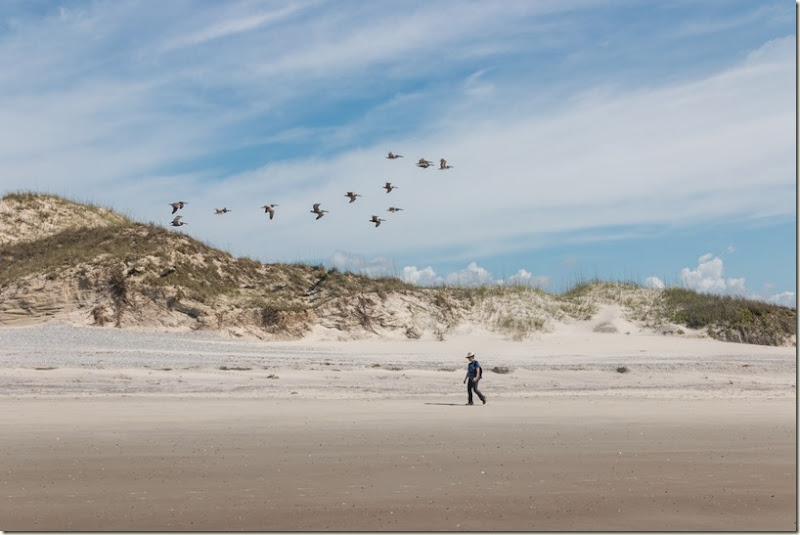 One weird thing we saw was this dead fish. 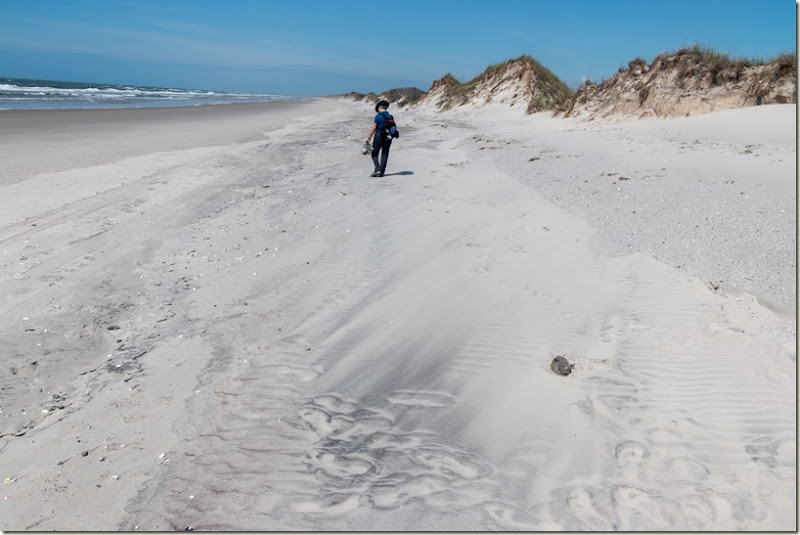 It seemed to be whole. Is it a puffer fish and so poisonous that nothing will eat it? 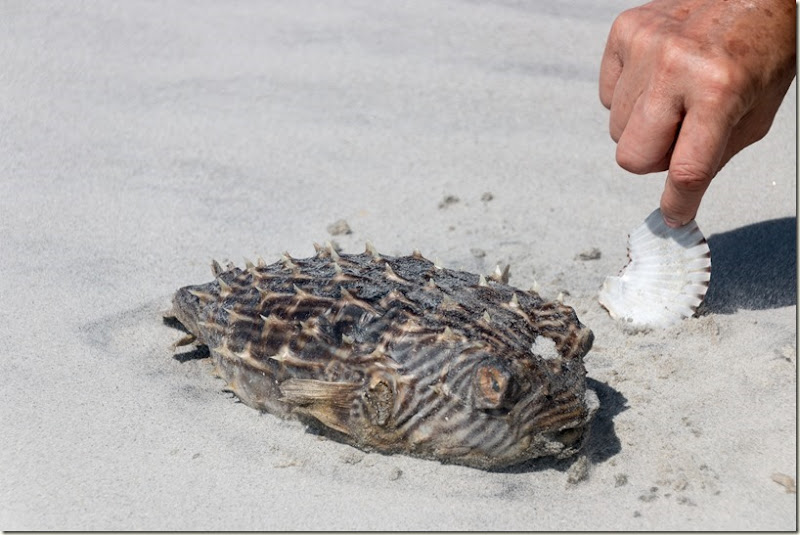 The beach was pretty empty the whole time we were there except for one hour when the school class came on one ferry and left on the next. We were still far down the beach so it didn’t bother us. 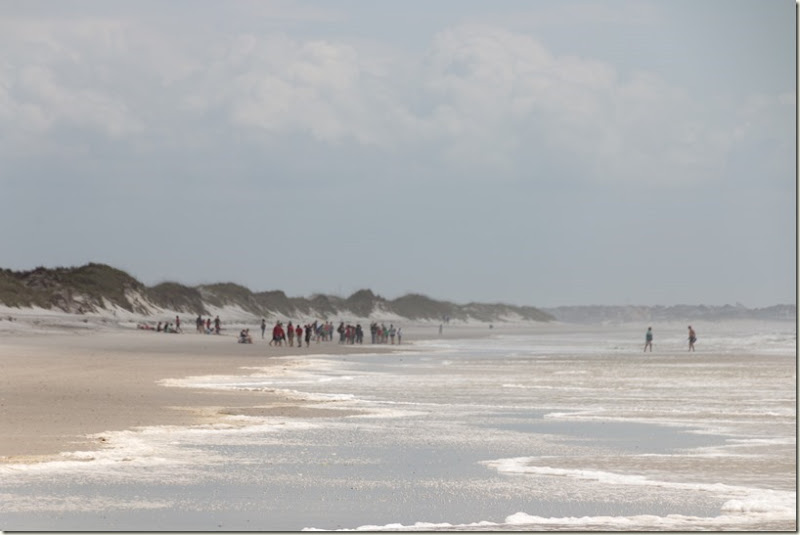 This is the entrance to one of the campsites just behind the dune. 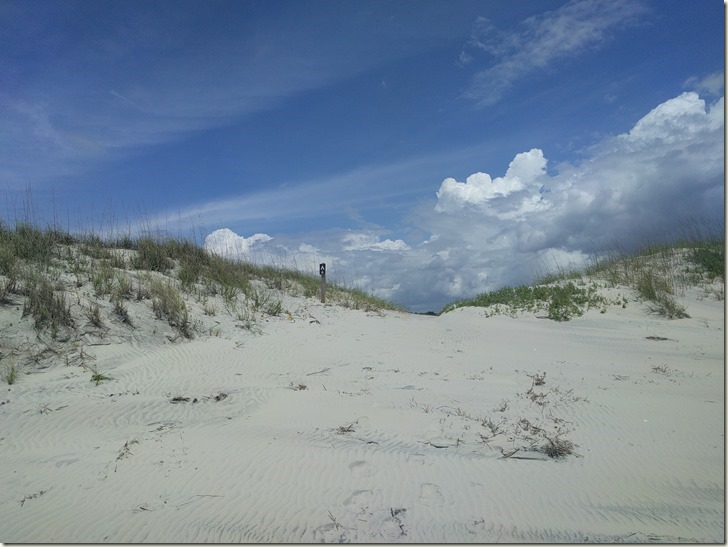 And the site. A little small. 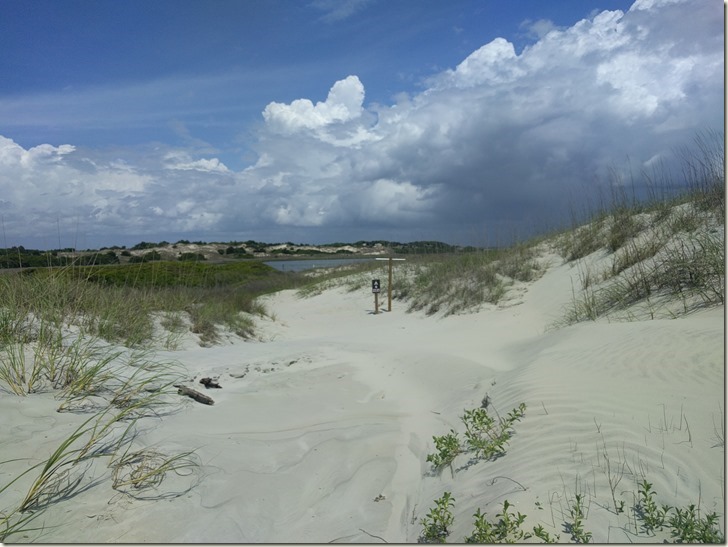 As we walked south on the beach, some dark clouds started forming to the north. As the wind seemed to be coming from the north we kept a close eye. It seemed, however, that the winds up there were blowing to the west because the storm passed by us and we never got a drop or were even out of the sun for very long.

Someone was getting a lot of rain up there.

As we were leaving the dark clouds gave way back to sunny skies. 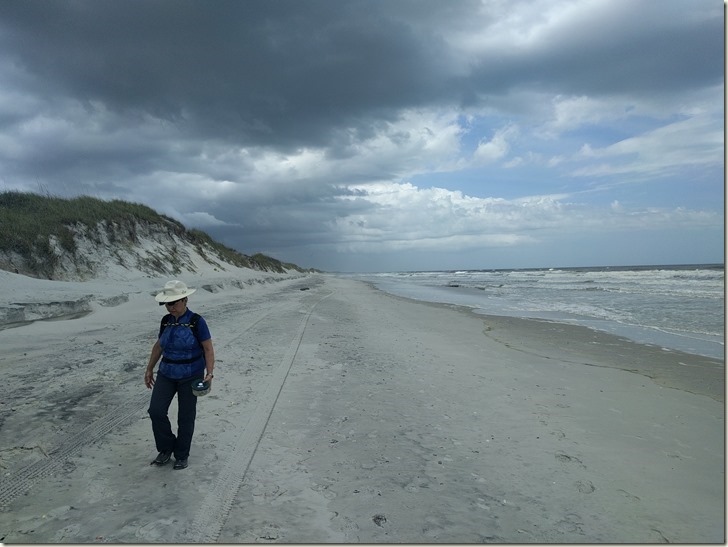 By now our various pedometers and fitness trackers said we had walked somewhere around 6-7 km. We headed back to catch the 2 pm ferry. 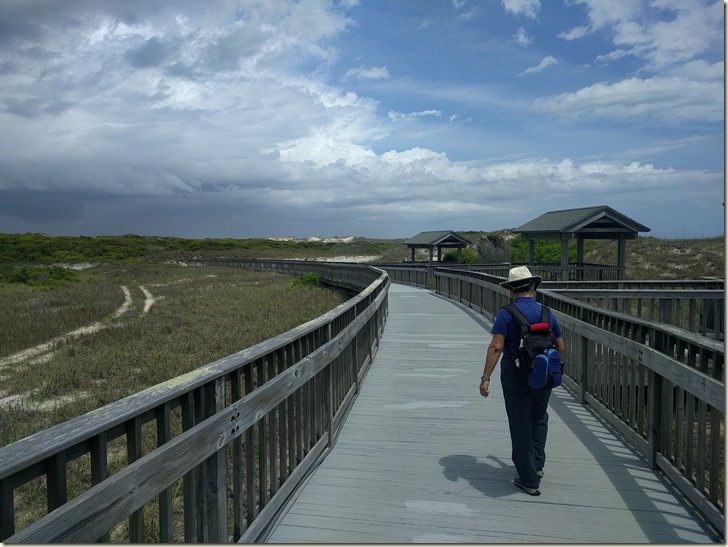 We stopped at a Piggly Wiggly on the way home to get some groceries. Jennie said it had a lot more of what she called “southern” food.

If it rains tomorrow we will probably take a day off.